You might have been taking a course on deep learning and at the beginning of it, it seems to you very easy, and then you have encountered “backpropagation” and you will start your head scratching because it is too “mathsy.”

why there is a need for understanding the Back Propagation algorithm for us?
The answer is very simple. We, human beings are always curious to know how things are happening in the real world.
For example, when we see human breathing. From outside it looks like it is simply the intake of air & release of CO2.

But, the curiosity of the human race led us, to know that, in this short interval of 1–2 sec.
The whole blood id first oxygenated & then it transported through nerves and reaches to every single cell of our body.
And finally, it deoxygenated.

Humans are always curious to know, how the mechanism which governs the things of the real world around us.
And for any Deep Learning practitioners our,” Our world revolves around neural networks”.
So, for the sake of killing your curiosity & and giving you the idea of how neural networks are trained.
I’m presenting you with this article.

The context of this article are:-

Okay! So, first understand what is a neural network.

I don’t know you are aware of a neural network or not. So let us first understand this concept.

A neural network is a series of algorithms that endeavors to recognize,
underlying relationships in a set of data through a process that mimics the way the human brain operates.
Neural networks can adapt to changing input; so the network generates the best possible result without needing to redesign the output criteria.

or in simple words, we can describe a neural networks as:-

-It’s just a computer program that learn and behaves in a remarkably similar way to human brains.

In simpler words, Back Propagation is the central mechanism to train a neural network. In which we calculate the error of our desired targeted output value & then we adjust the weights in a way to minimize this error.
it’s similar to human being how we learn from our mistakes.

Now, compare this situation with a neural network:-

In a neural network, this is called updating the weights in order to get the desired targeted output.

Okay so, now jump into Backpropagation algorithm to understand it. 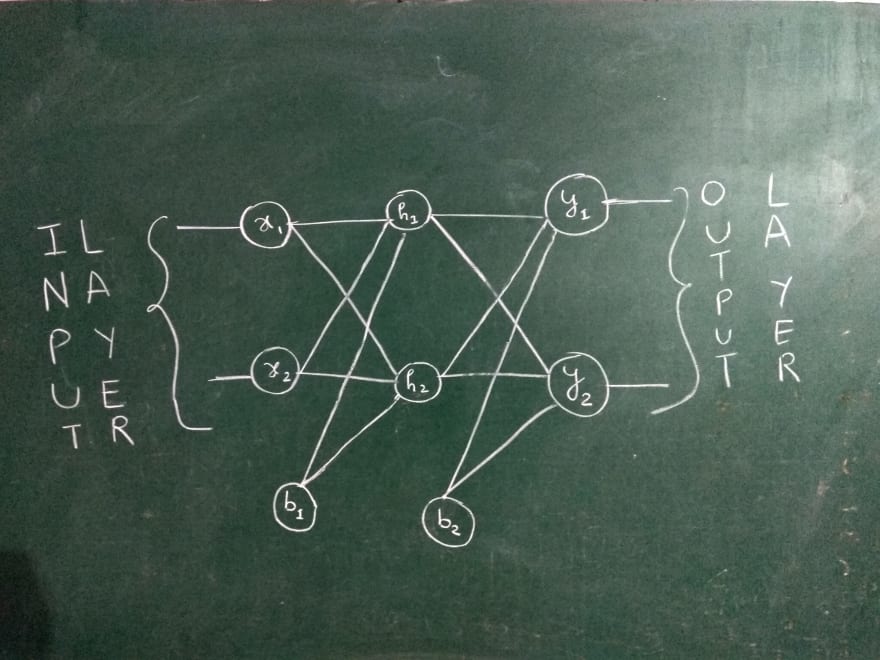 This is a figure of a simple neural network having 2 layers i.e input, hidden and output layer, respectively. Each layer is having 2 neurons. 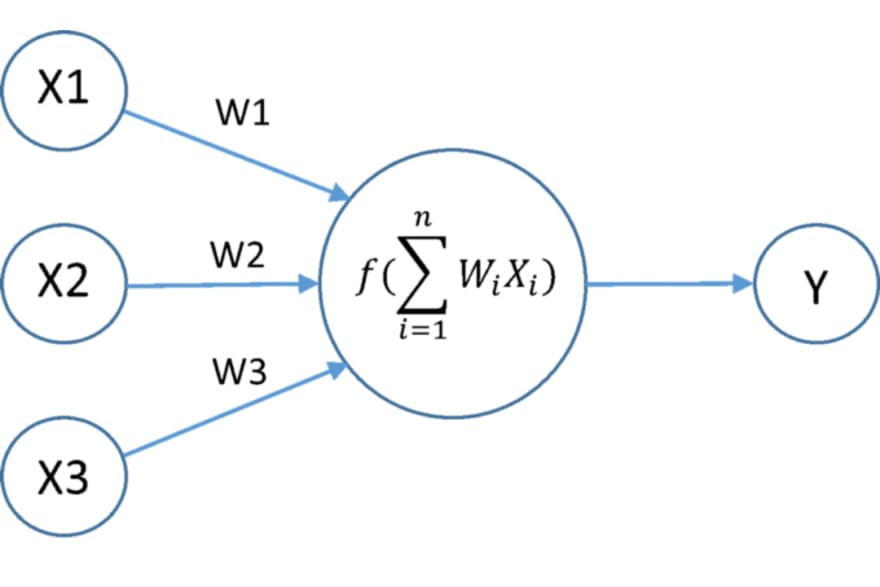 The function of a neuron is, to sum up, all the multiplied inputs with its weight & the bias.
And the Output is followed by the operation of the activation function.

Let us understand Back Propagation with an example: 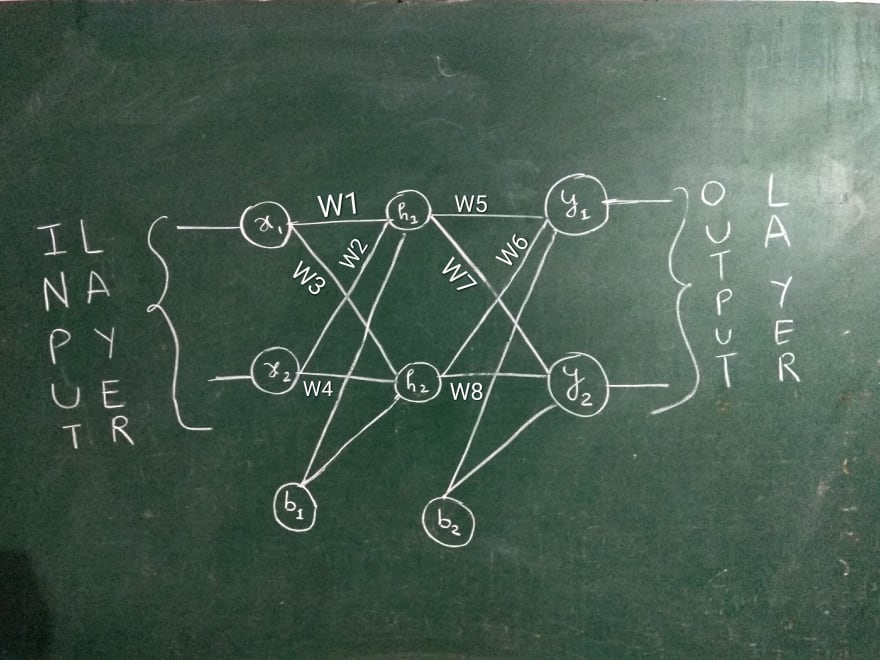 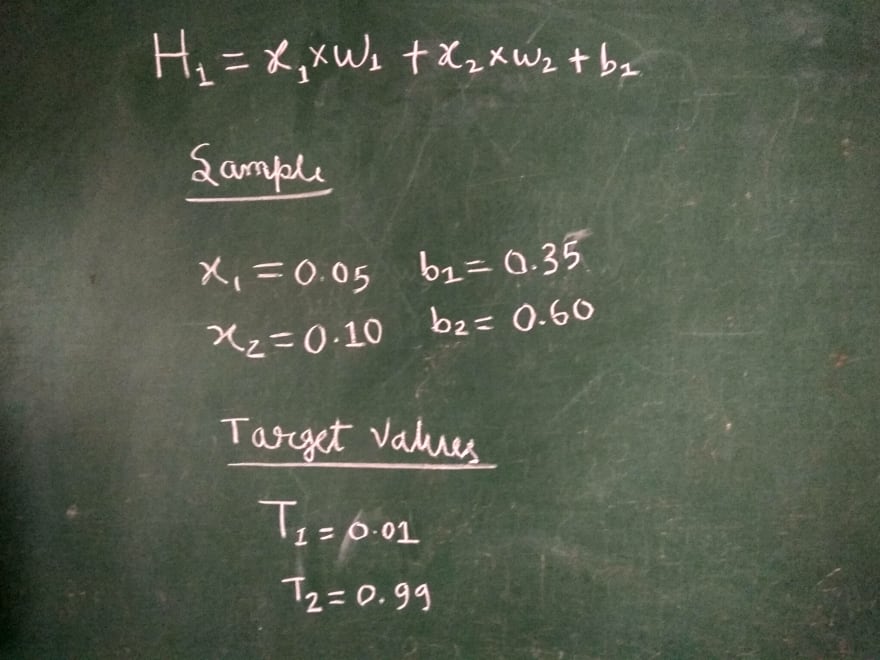 Now we randomly initialize the weights,

Note: In this whole article we’re using SIGMOID as an activation function. 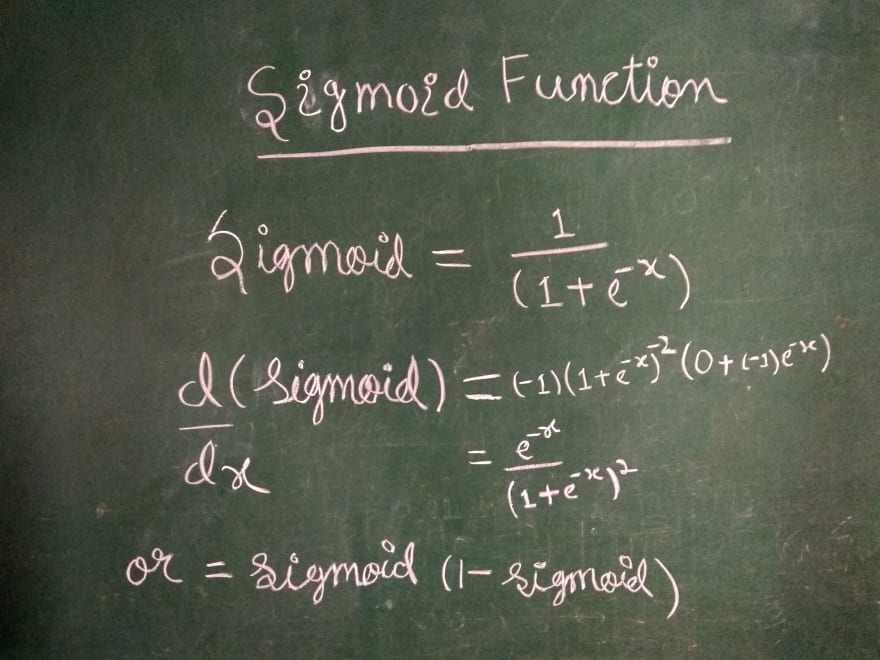 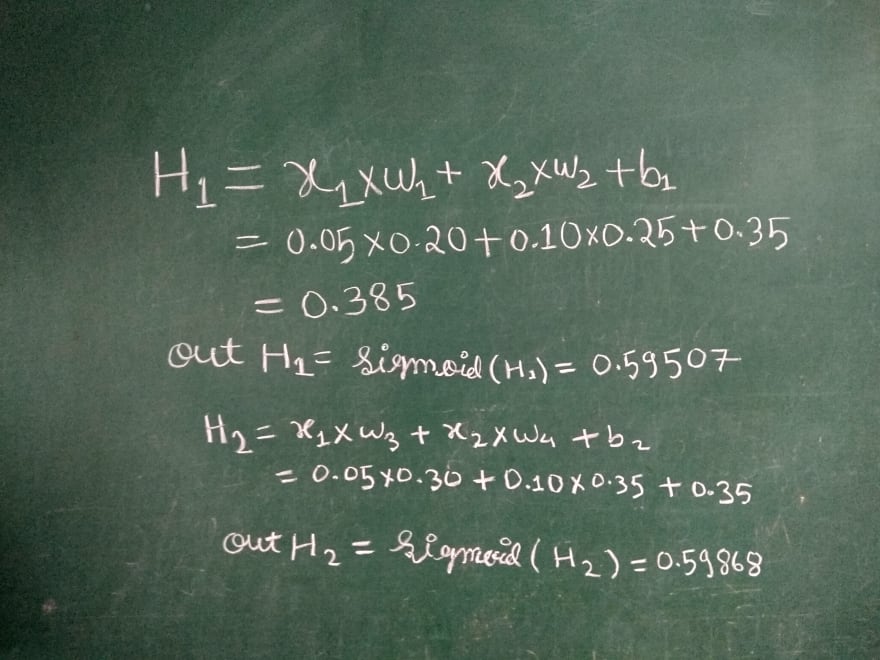 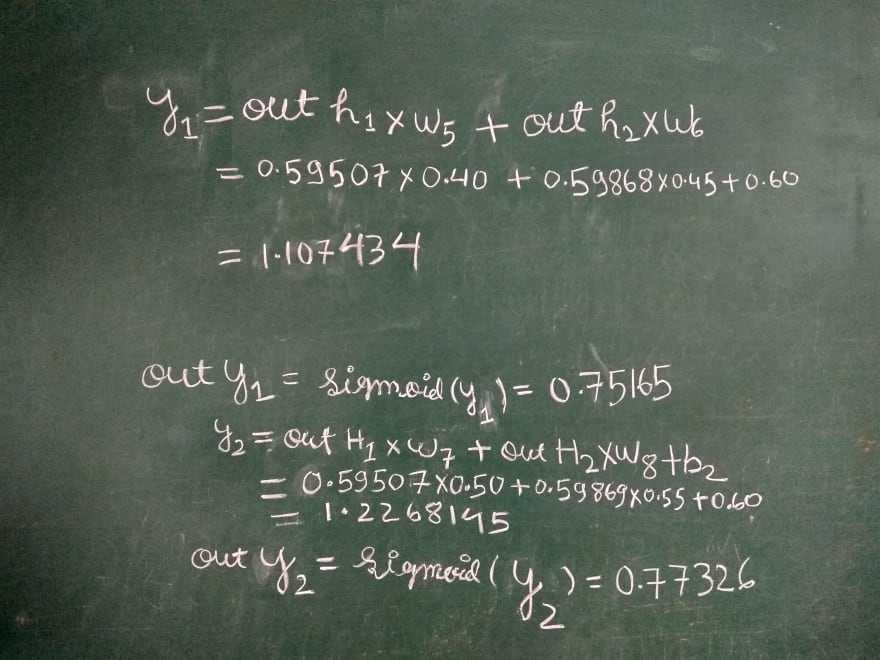 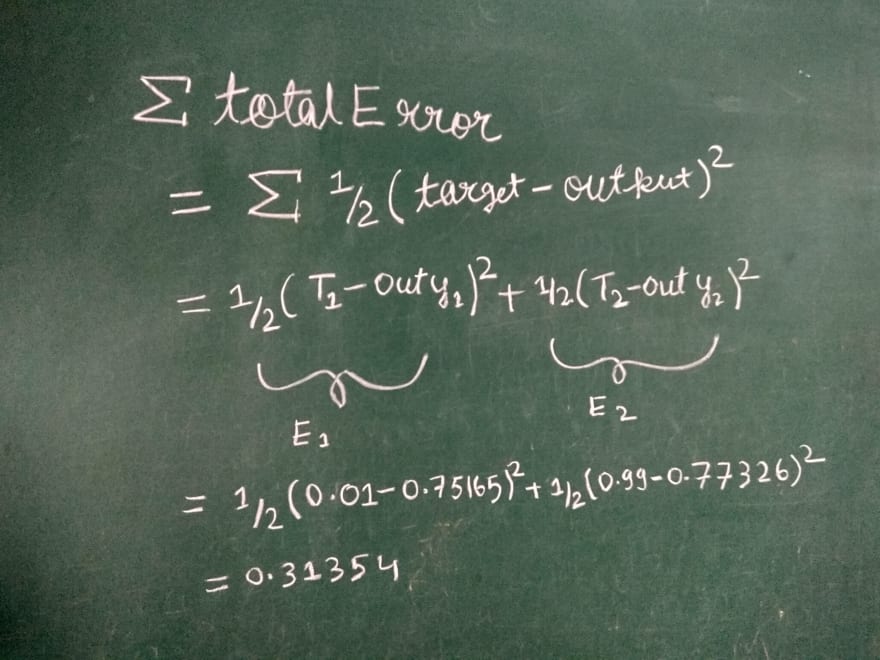 Now we have to backpropagate, to upgrade the weights
Consider w5, Error at w5

Partially differentiating each term one by one. 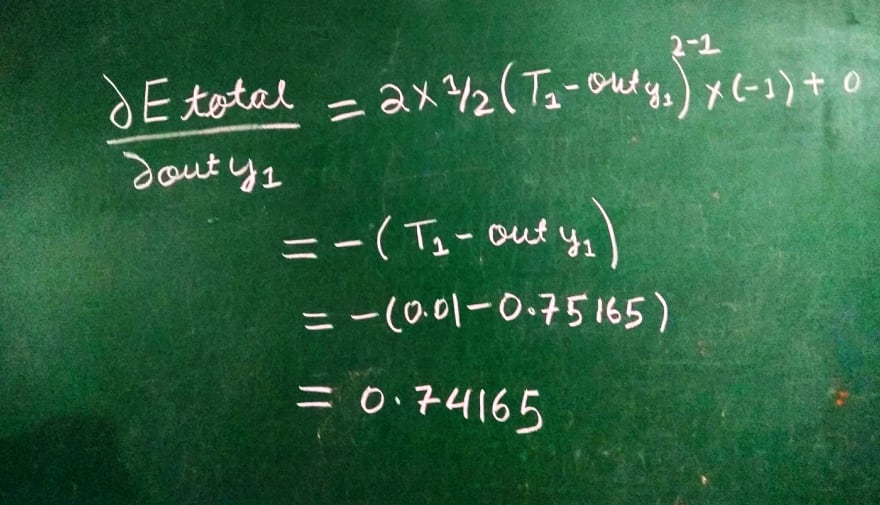 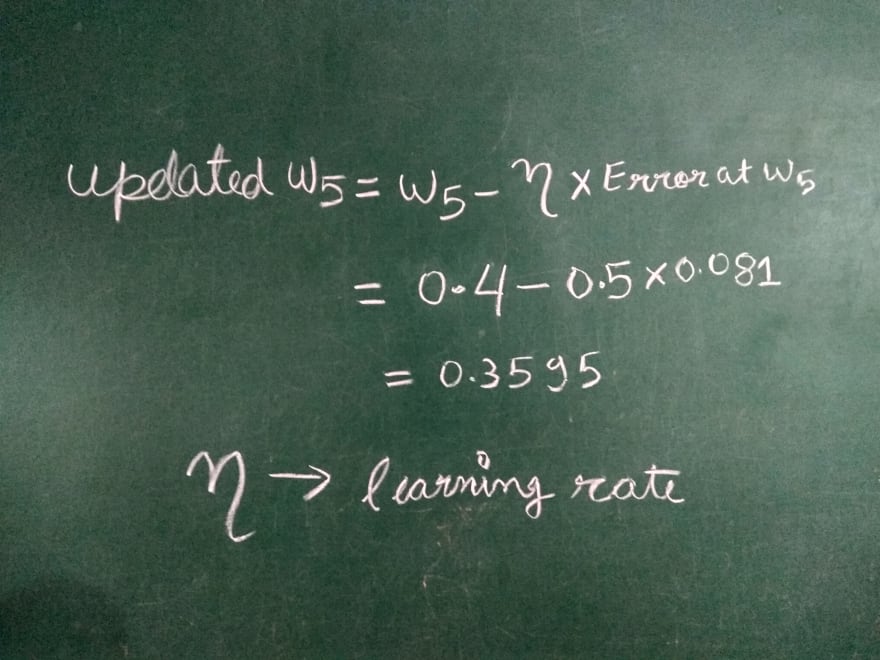 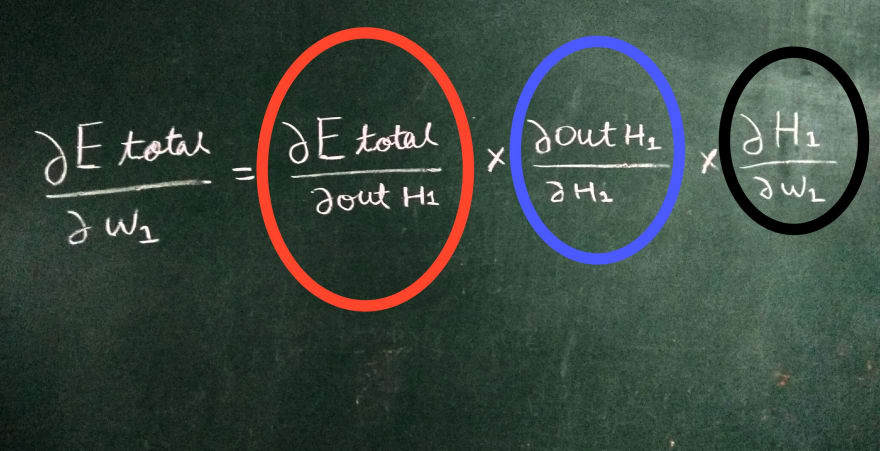 But there is no w1 term present in the expression of Etotal.
So, in order to do that, we have multiple splits.

The terms which are encircled, we can’t differentiate them directly. So, we have to split them.

Consider the term which is encircled orange & let us split & apply the chain rule. 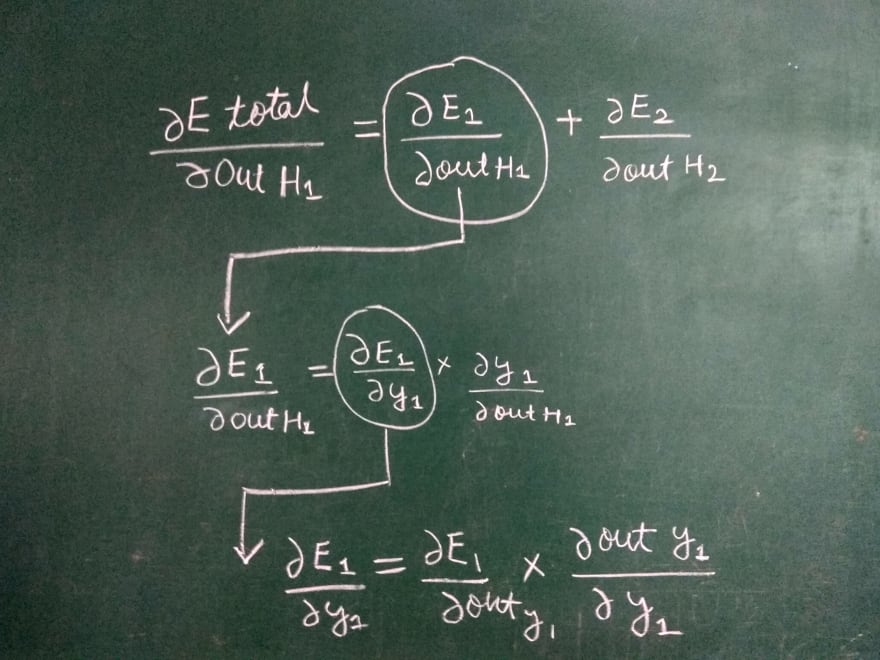 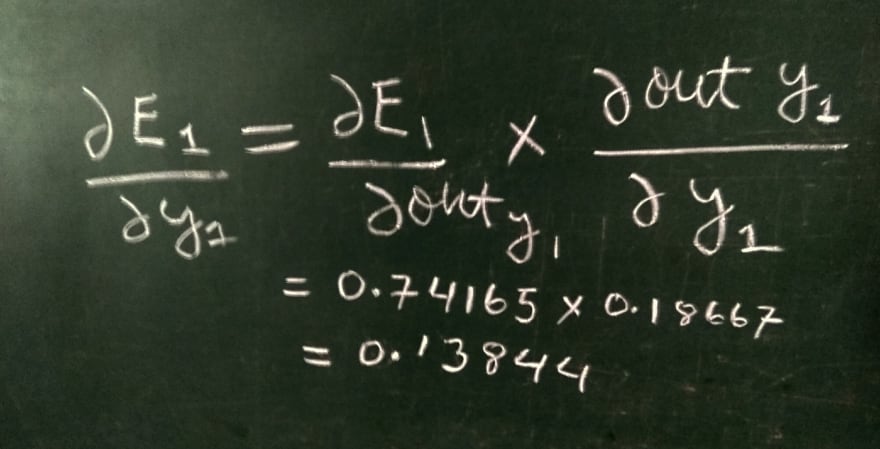 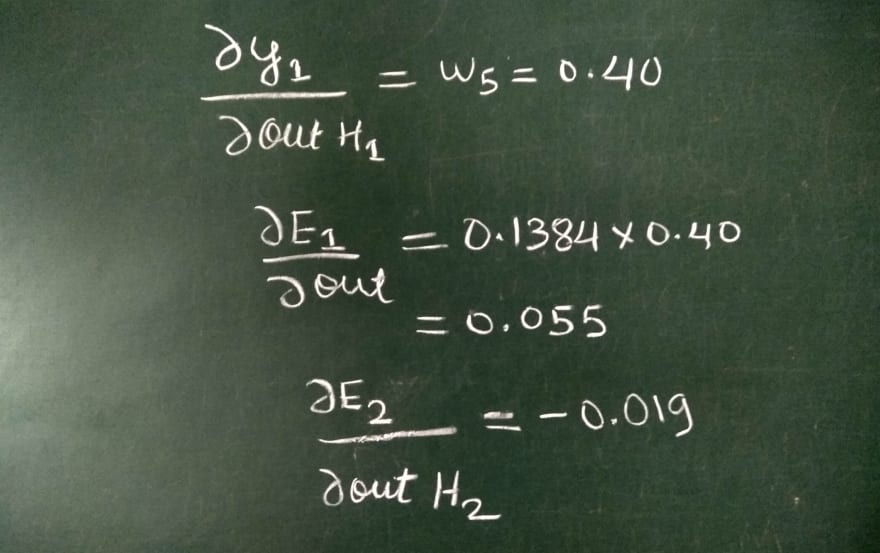 We have calculated the term which is encircled orange.

Consider the term which is encircled in blue. 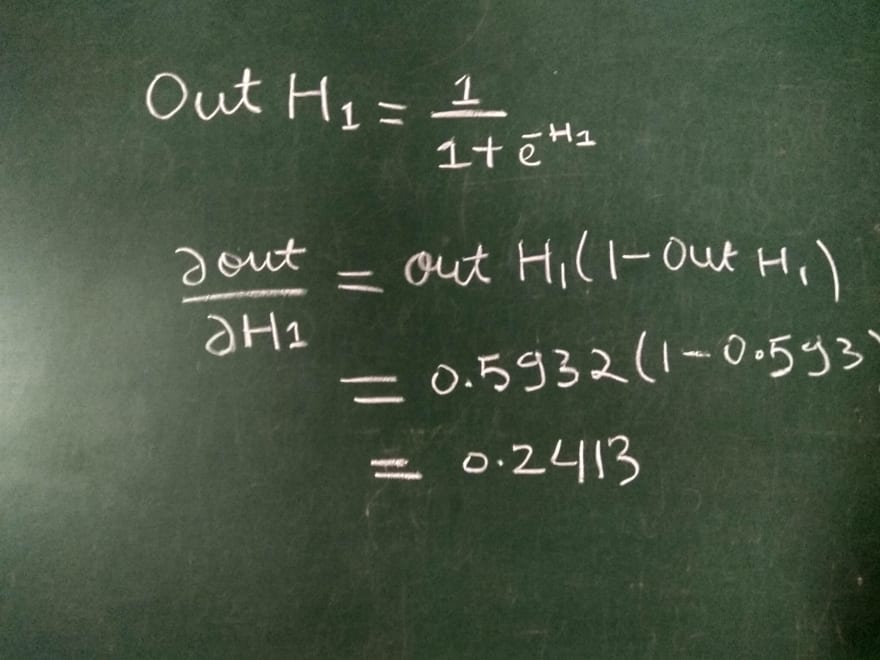 Consider the term which is encircled in black.

Now we’ve calculated all the terms which are encircled.
Therefore the error at w1 is: 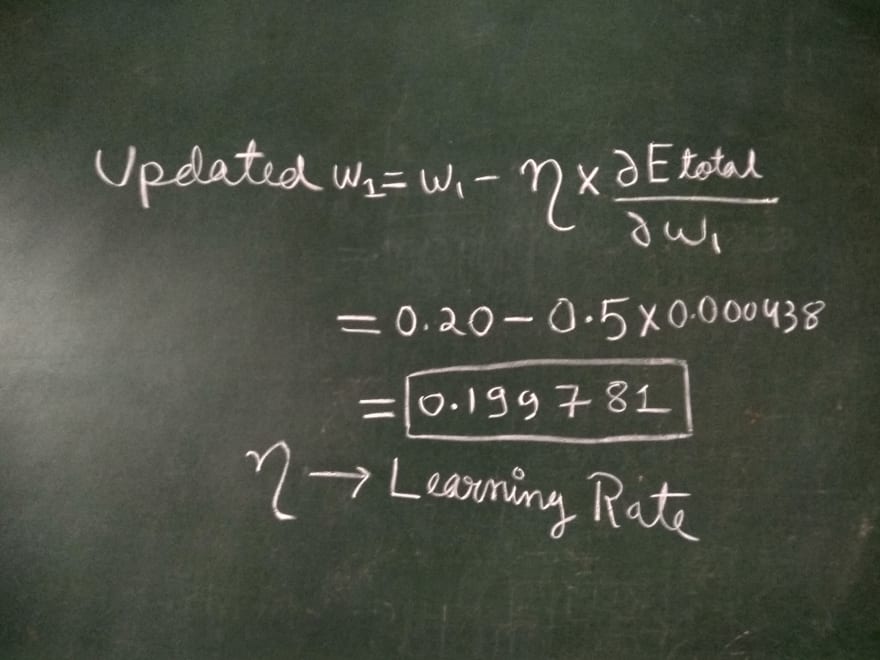 So with these updated weights(w1,w2,w3 & w4).We’ve to again calculate H1 & H2.After calculating H1 & H2 ,we can calculate y1 output & y2 output. After that, we can calculate the Total Error as we have done earlier, and again with the help of this new Total Error. We backpropagate & updated the weights. 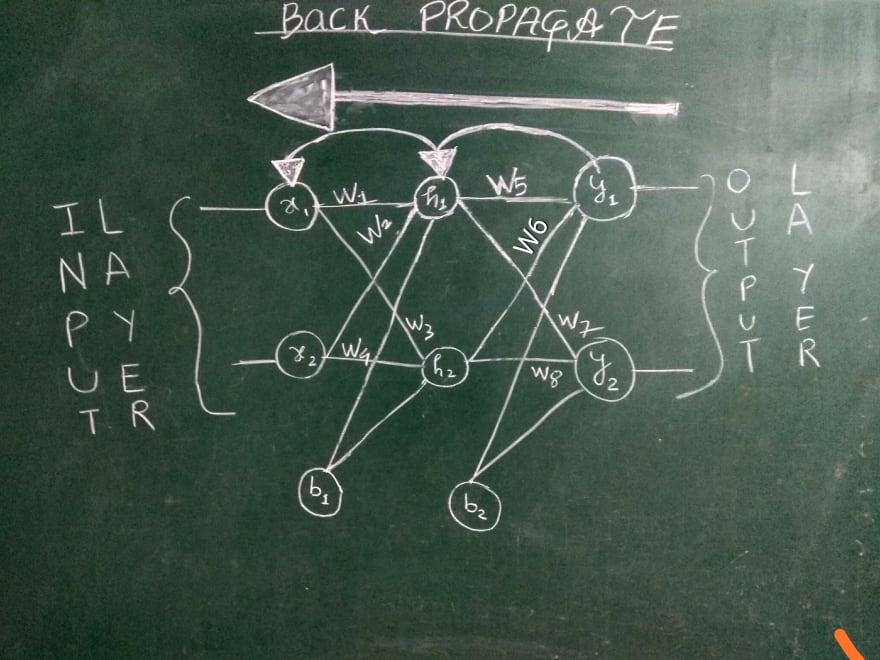 And again with the updated weights we forward propagate. 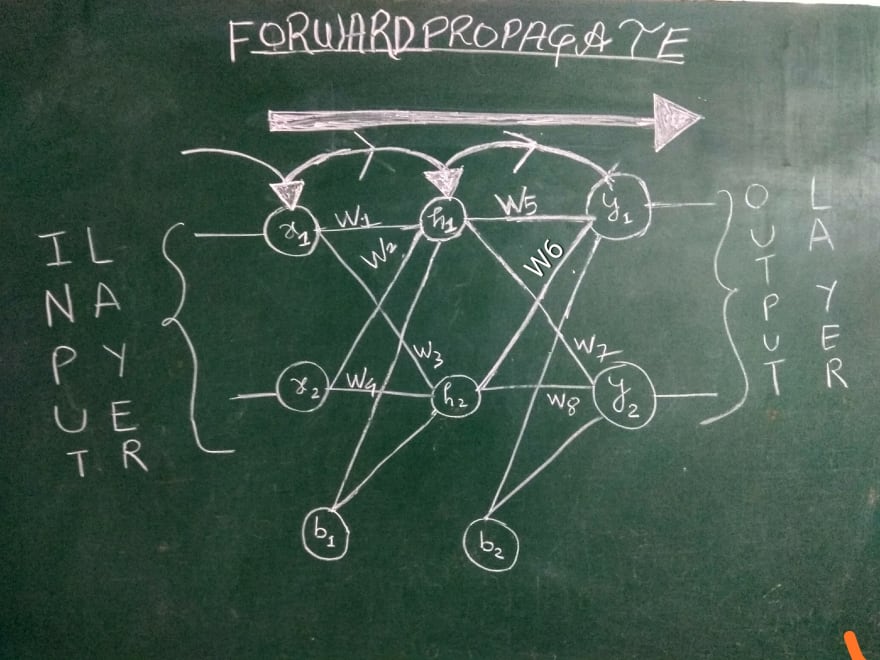 We’ve to iterate over & over again between Back Propagation & forward propagation.

Until the Total Error(cost function) is minimized or in other words, the value of our predicted outputs is closer to that of the target values.

In one sentence we can define backpropagation as it’s a common method of training a neural net in which the initial system output is compared to the desired output, and the system is adjusted until the difference between the two is minimized.

We can now say that backpropagation is the central mechanism to train any neural network.

I hope you’ve understood now what is the backpropagation algorithm and how it works.

Congratulations you’ve just understood one of the toughest “mathsy” topics of machine learning.

Please visit the above medium link and Don’t forget to give us your 👏 & follow me on medium!!!!!!!

Also, this is my very first blog in dev.to . So kindly follow me and hit the like button.

10 Skills Every Data Scientist Should Know

How did Netflix use ML to become the world’s streaming leader?

AbHiNaV_PrAkAsH_AP
Hey, I'm DL and ML enthusiast. who is trying to serve humanity with the help of ML.
You will not do it later (most likely) - I'm a procrastinator, I know
#programming #discuss #watercooler #productivity
GitLab will be deleting dormant projects
#news #discuss #gitlab #cloud
What's the difference between Front-end and Back-end development?
#anonymous #discuss #help

Once suspended, abhinav__ap will not be able to comment or publish posts until their suspension is removed.

Once unsuspended, abhinav__ap will be able to comment and publish posts again.

Once unpublished, all posts by abhinav__ap will become hidden and only accessible to themselves.

If abhinav__ap is not suspended, they can still re-publish their posts from their dashboard.

Once unpublished, this post will become invisible to the public and only accessible to AbHiNaV_PrAkAsH_AP.

Thanks for keeping DEV Community safe. Here is what you can do to flag abhinav__ap:

Unflagging abhinav__ap will restore default visibility to their posts.