I ran a poll recently trying to get an idea of what people expect when I would tweet or write something like, "this thing, X, is supported on Windows". Because Windows these days means more than a few things. There are these subsystems, Windows Subsystem for Linux, or WSL that are also considered, more or less, to be "Windows".

WSLs of whatever version, they're really Linux operating under or in some pretense with Windows. It's kind of confusing really, because also there is WSL1 and WSL2, which are in their core entirely different beasts. They handle all sorts of things in different ways.

Whatever the case, I've concluded and will continue to do work that will support the OS specifically. 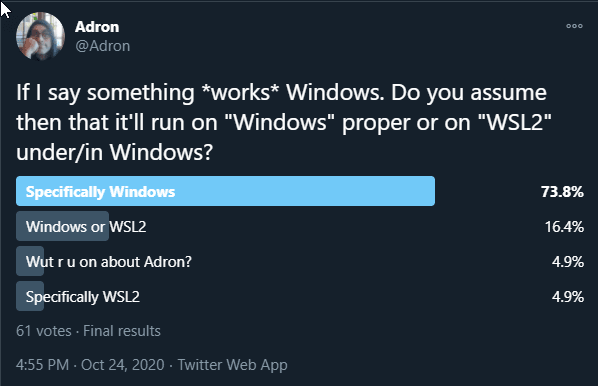 How do you deal with burnout and depression?