(repost of my original essay from here )

The best laptop I ever owned.

Even if you need to occasionally run Windows for work - MBP is still the best possible hardware to do that. The 15-inch retina MacBook had that unique blend or elegance, power, durability... And by "durability" I mean I even fell off a motorcycle with this thing in my backpack. Twice. 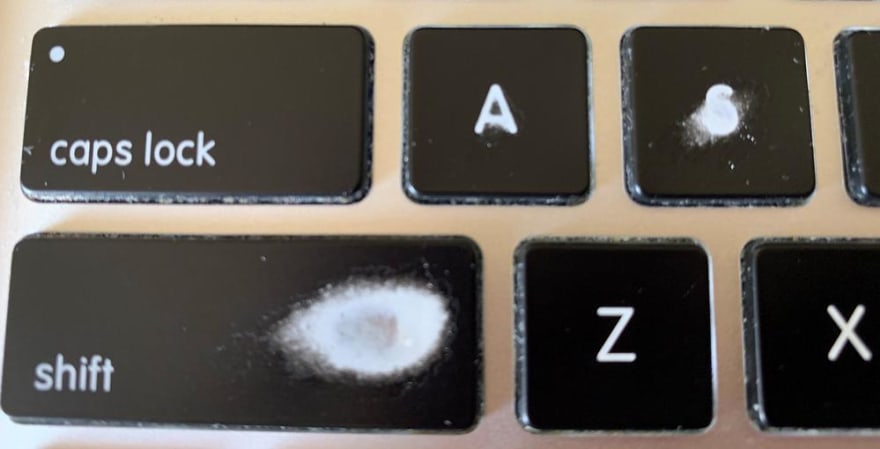 This is my 5 y.o. laptop's keyboard. You can tell, it was time for me to move on. Although the thing still worked brilliantly and even (kinda) ran modern video games like PUBG or Battlefield.

I kept upgrading this machine to the bitter end, replacing nearly everyting - the screen, the battery, the hard-drive, RAM, you name it - but it was just postponing the obvious. It was clearly time for an upgrade.

And that's when I found myself in that position of "nowhere to upgrade to".

Apple still sells the old 2015 model, but it's limited to the integrated Intel GPU. And the new Mac Book Pro is not an option, because... Well, leaving out the butterfly keyboard issues and the "usb-c-gate", it's mainly because

This thing requires you to take your eyes off the screen, you can't just feel the "Esc" button with your finger. And what do you get in return? Not much. This bar is a solution in desperate search of a problem.

If there was a 15" model without it - I'd buy it without blinking an eye.

It took me more than two years (partly because I loved my old MacBook too much and was simply postponing the decision) to eventually find a suitable replacement. After reading tons of reviews and even test-driving some of the options, my search for a great Mac Book replacement is finally over. I bought a new laptop and I'm loving it.

It is Microsoft Surface Book 2 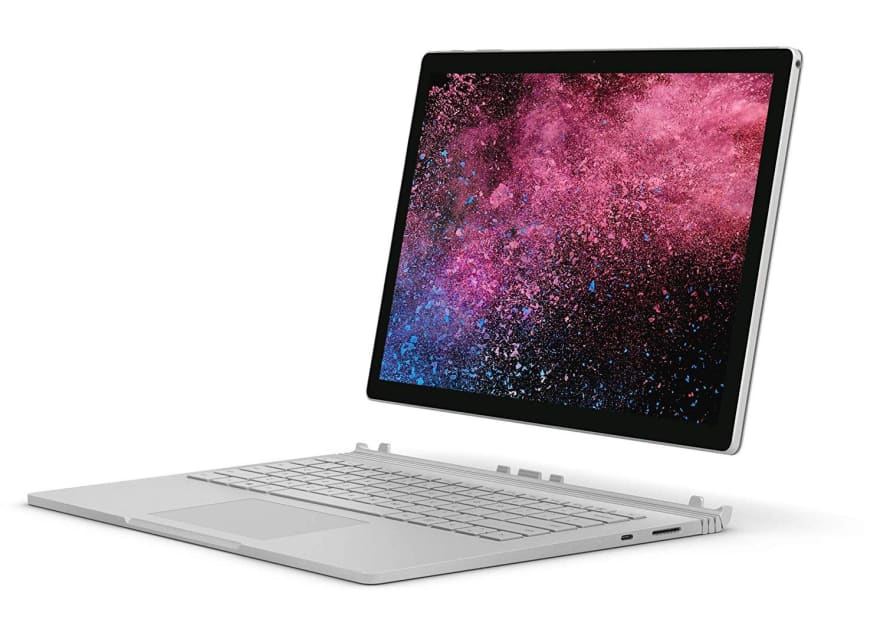 Ironically, though, Apple still plays a huge role in why this laptop is so good. Apple has paved the road for everyone else. Apple has raised the bar, set the new standards and pointed the direction. So thank you, Apple, for making this Surface Book so good.

See, PC manufacturers listened and learned their lesson. PC laptops are not those squeaky awkward pieces of crappy plastic covered with idiotic "Intel inside/Powered by Windows" stickers, as I remember them. Nope, they're all stylish-metal-unibody-PorscheDesign-whatever these days. And it's because of Apple.

And while Microsoft keeps getting bad press for stealing so many good ideas from Apple, (a) as a consumer I simply don't care, I just want the best from both worlds. And (b) not only Surface Book 2 matches Apple's design standards, it goes far beyond.

This is one of the best screens in the industry, period. Being a super meticulous customer, I actually brought my old Mac and my wife's new 2018 MacBook Pro with me to the Microsoft Store and compared them side by side. Microsoft won. Rich colors, more brightness even for a sunny day, great design, and as it turns out, the 2:3 aspect ratio is actually cool, giving you more vertical real estate. 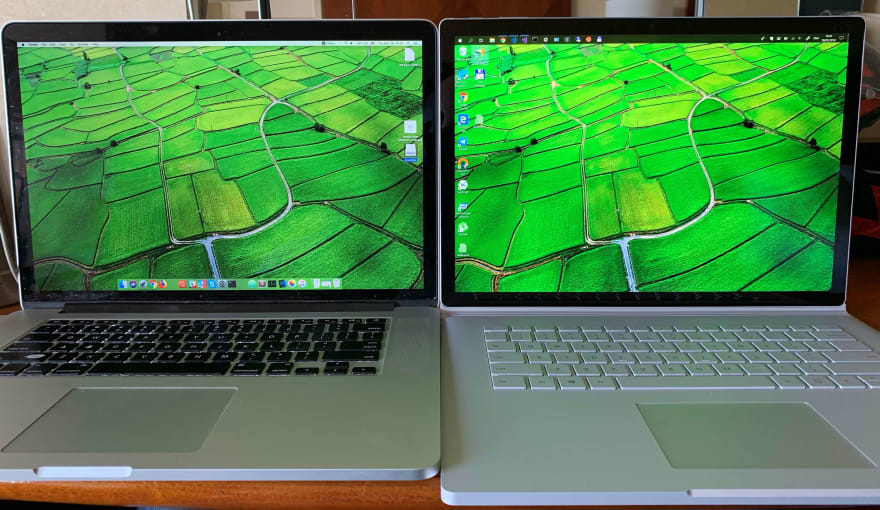 Check this out. The picture quality is equally good on both. MS Surface (on the right) looks weirdly brighter and... blue-ish I guess? But that's just the wrong color profile. Calibration sorted that out.

There's one tiny downside though. Both screens are glossy, but MS'es is somehow "glossier". I don't know if it's just me, but reflections seem tiny (!) bit brighter on a sunny day, when the sun's behind you. Probably because Mac's screen has some polarized spraying on it maybe? Or maybe my Mac is just too old and dirty.

Not only it looks clean and beautiful, but it also feels very soft. It never gets too cold to touch (unlike MacBook) and stays clean forever. The hinge looks weird, but in a good way - adding character and personality to the laptop. I recently came back from Microconf, and three or four people at the conference had approached me with a "how do you like it?" question after spotting the model by its looks from afar.

The keyboard is great - mainly because it's basically an exact replica of MBP's, with the layout, keys and gaps stolen from Apple, so your muscle-memory doesn't have to adapt (I'm wondering if that was intentional). The track pad - which has always been a huge problem on every PC laptop I tried - finally works. Just works. It's invisible. Even to a 14-year Mac user like me. Microsoft has finally nailed it, both software and hardware wise.

Who would want that? Why would a laptop be a "two in one" device? I was super skeptical about the whole "detachable screen" concept, until after I tried it myself.

First of all, this is a huge bonus for someone who travels a lot: you get a free tablet without bringing any extra devices. And it's not just any tablet - it's an actual, uhm, "computer" - with VSCode, terminal, SSH and all - and with an i7 quad core CPU inside it (since most of the laptop's computing power sits in the screen, not the base). You can write code behind your desk, then detach the screen and read a book or watch Netflix before falling asleep.

By the way the tablet is also super lightweight - which is something most reviewers don't mention for some reason. Actually, the whole machine is 15% lighter than my 15" MBP, which was a pleasant surprise.

Believe it or not the tablet mode is so good, I came back to MS Store to buy the pen next day. A Microsoft hater like me! And the whole "pen" experience came out surprisingly good. Even though the thing is a little overpriced and should come included with the device if you ask me.

But that wasn't the biggest surprise. After a while I found myself using the touch screen a lot when in laptop mode. What seemed like a completely useless toy at first, turned out very natural, I find myself scrolling, zooming, resizing and drag-n-dropping shit all the time.

(It really is the MPB's touch bar that seems like the definition of a "useless toy" to me...)

I know. "Windows". Meh. But just like PC laptops are not the crappy plastic junk from the old days, Windows has gotten better too. You probably havent' touched Windows for years, right? Just like most of my tech friends, who just don't understand how far Windows 10 has come. At everything: from touch pad gestures to the "Hello face" authentication (pretty similar to iOS'es "Face ID" unlock). Now imagine it all being finally coupled with "native" Microsoft hardware - at last! No more driver headaches, no more "rolling back that nVidia thing cause it conflicts with that other thing". Even the laptop's firmware comes via Windows Update now, just like Apple, I know ;-)

If you're coming from MacOS/Linux though, here are the two hints that'll make you life much easier under Windows:

It's gonna feel awkward at first, since some of the tools you use (like VSCode) run natively on Windows, while other run inside the linux terminal, but once you get used to accessing your windows-files via "/mnt/c/" from linux (which is how Ubuntu mounts your "C:" drive) - it gets easier from there.

Usually posts like this end with an Amazon affiliate "buy here" link :-) I'm not paid by MS nor making nay money... I really did spent two years researching and test driving MacBooks, Razer Blades, ThinkPads, Dells and whatnot.

Microsoft Surface Book 2 is beyond great. Several years ago if you told me Microsoft would build a machine that is way ahead of the rest of the industry (including Apple), I'd laugh in your face. But they somehow managed to build a serious, powerful, work-oriented and elegantly designed notebook for professionals. It's equally good for "heavy" tasks, like debugging code, training an ML model, rendering a video, playing a modern game - and - taking quick notes at a conference, sketching a mockup with the "pen" or watching "Silicon Valley" on a plane.

There are dozens of little nice things and nuances I haven't even mentioned, but they add up to complete the whole experience. Like the magnetic charging port (MagSafe-inspired, I know), two "traditional" USB ports and USB-C, the "reverse screen" mode, the toggleable "FN" key, the built-in Mail/Calendar apps, hand-writing recognition, long battery life, an extra USB charging port on the power adapter (loving it) and, of course, the GTX 1060 beast.

The only downside I can currently think of - and it's a bit of stretch - is the extremely low "iFixit" score for this machine. As a computer nerd, I would love the ability to open it up easily and, say, upgrade memory to 32 GB or replace thermal paste on the CPU, but that's just me being picky I guess. We'll see how it goes in a few years.

Other than that it's a perfect machine for my development work, travel and gaming. There's no way I'm going back to a MacBook any time soon.

UPDATE: I received, like, 10 DMs on Twitter questioning my motocycle riding skills, hahah. Just to clarify: I'm an enduro/offroad/dirtbike guy. 2 falls is nothing in our world.