In terms of a pandemic situation, many large companies were forced to take all their processes online. So, they need someone who can build an enterprise-level server-side application, create website content, and keep up maintaining it promptly. In this case, many projects choose Java to build the apps and, consequently, need as many Java programmers as possible to implement that. So, if you still ask yourself “Why should I learn Java”, this is supposed to be an answer.

But, this is not the only reason, and I will explain why becoming a Java developer in 2021 is a fresh start.

Why Choose to Become a Programmer in 2021

Right before considering the other reasons for starting to master Java, it makes sense, to begin with fundamentals and discover what’s so good about becoming a programmer.

Software engineering is a fairly stable industry. Even the study of the Bureau of Labor Statistics showed that the percentage of unemployed the workforce in computer and information technology occupations not only remained consistently low but also fell by May 2020. The percentage of unemployed individuals in all other occupations, in its turn, increased up to 13.5%.

Regardless of industry stability, the technology is still evolving fast, and you won’t be likely to use the same skills you are acquiring today in five or ten years. But this should not prevent you from learning to program. The companies are interested in the constant development of their employees and usually support them in adopting up-to-date technologies, tools, and concepts. So, you can keep up polishing your skills and remain an in-demand programmer.

I won’t reinvent the wheel if I say that programmers can make considerably more than the specialists of the other mass career choices. The skills of software engineers are wanted by many companies, and the next list of salaries by Glassdoor clearly illustrates that statement:

There is a black sheep in every flock, and annoying people are everywhere. But, the chance to meet such coworkers and face discrimination in the IT world is still miserable. Apart from that, there is a great variety of job offers on the market, and the rumors spread promptly among local programmers. So, you can easily avoid bad companies, which is hard to do in many other spheres.

Besides, more and more software companies strive to adopt effective practices that help them care about the level of productivity and well-being of their employers. Feedback sessions, one-to-one meetings, retrospectives are just a small part of the adopted processes that allow managers to stay in touch with a team.

Many companies hiring Java devs are telecommuter-friendly, they allow flexible working schedules and remote work, so you can accomplish your professional duties from anywhere in the world.

Now you know that becoming a programmer in 2021 is a good prospect for your future career. Let’s move further and talk about why Java is worth selecting for the coming projects.

TIOBE Index has recently come up with new results for December and Java is now the world’s second most popular programming language.

The test conducted on Devskiller made Java a winner, while SQL and JavaScript took second and third place, respectively. The reason for being so popular lies in the constant development of Java, which leads to new, up-to-date features. The latter makes the development process easier and more optimized and hence significantly helps developers.

Among other things, Java is known for its wide application. It is used literally everywhere, be it desktops, mobile platforms, smart cars, and houses, etc. At the moment, the so-called “Java ecosystem” contains about 8 million Java coders all over the world. Because of an extensive pool of experienced specialists, many companies choose to use this language for their projects. This is especially true for large organizations that have demand for building enterprise-level server-side apps, and Java developers are just perfect for that role.

Java remains popular, despite the fact more and more new technologies pop up, and given the stats, this tendency is not going to change any time soon.

When it comes to the employment rate, Java confidently beats many other programming languages. As I’ve already mentioned, it is frequently used in big companies launching big projects and requiring a lot of specialists to join. There is also enough work and money that allow big companies to hire Juniors, so the beginners can land a job right after mastering Java fundamentals.

These and other projects usually require the following skills:

Whereas the most popular areas of Java application are as follows:

The mentioned wide Java application allows developers to grow in their career and count on upward mobility. The specialists, working on large projects, often learn other languages to be able to do some part of tasks in Java, and the rest — in another language if needed. Java developers are not afraid of being fired as they are allowed to learn a new language while working (after Java, almost all languages are easy and fast to learn). These and other reasons make the coders satisfied with their working conditions so that they don’t often switch to another profession.

Online Courses Are For Every Taste and Budget

Now that you’ve started your programming journey, it’s high time to choose the right learning course. Fortunately, the web is full of many resources that offer interactive classes and challenges. Next, you will find a few I can highly recommend. 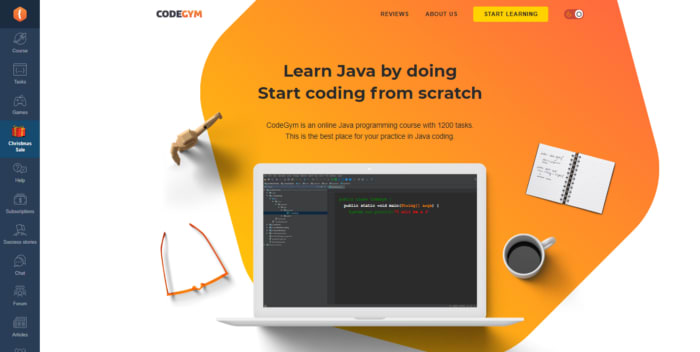 CodeGym is known for its practice-based approach to learning Java. The course contains over 1200 tasks to complete, ensures instant verification by the virtual mentor, allows building your own version of classic video games in the Game section, and offers to join the community. 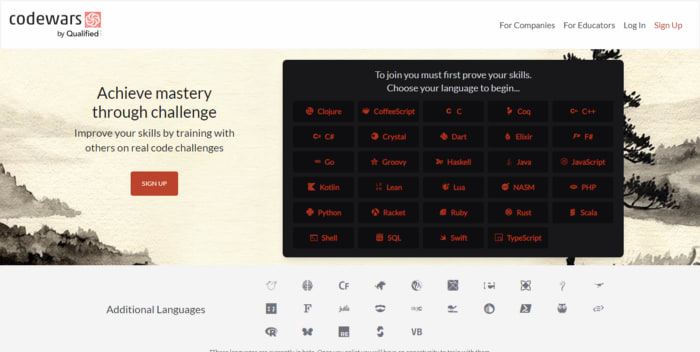 Codewars is another online learning platform that allows mastering over 20 programming languages, including Java. You will be offered to train with your peers on challenges called kata, as well as create your own kata and challenge your fellow-developers. 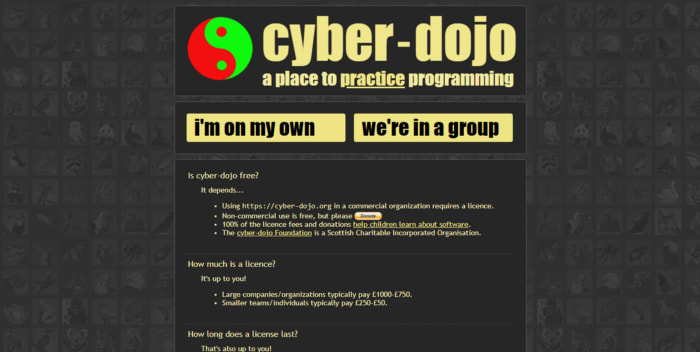 Consider Cyber-Dojo if you are in search of an effective gamified source to improve your skills in programming. The platform offers multiple tasks to complete, and each comes with a detailed description and examples of how the result should look. 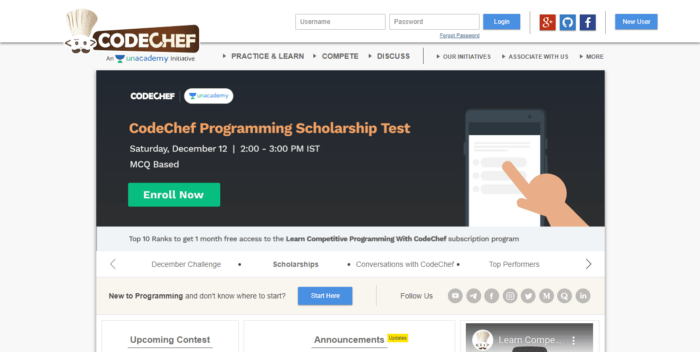 Other than teaching you a programming language, CodeChef makes it possible for you to hone the skills by participating in coding contests. You can also use this platform to learn more about binary search, algorithms, and other technical topics. 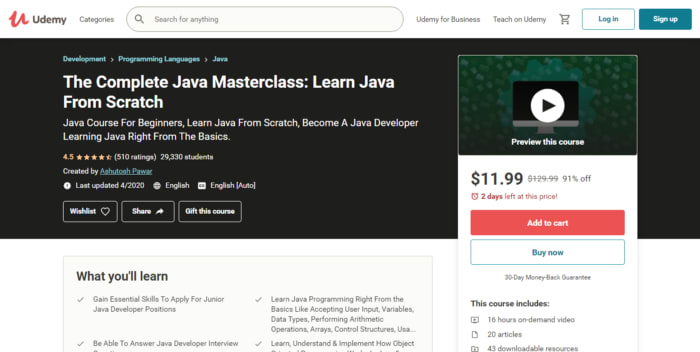 This is an ideal course for beginners as it allows learning Java from scratch. As soon as you acquire fundamental topics, you can move to more advanced Java concepts, such as multithreading, OOPs, ArrayList, and others. 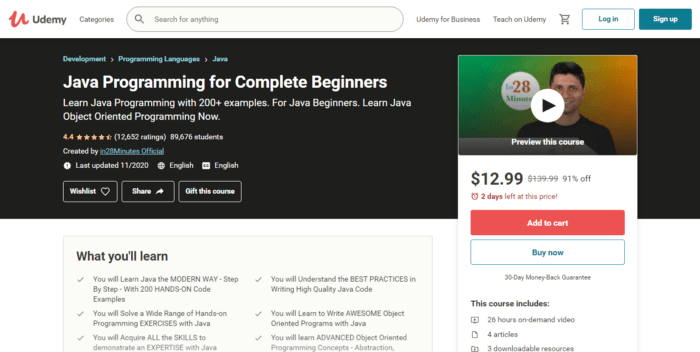 This course promises that you’ll master Java programming language in a bit more than 250 steps. It also contains over 200 code challenges, quizzes, and examples you should pass to hone your knowledge and skills. 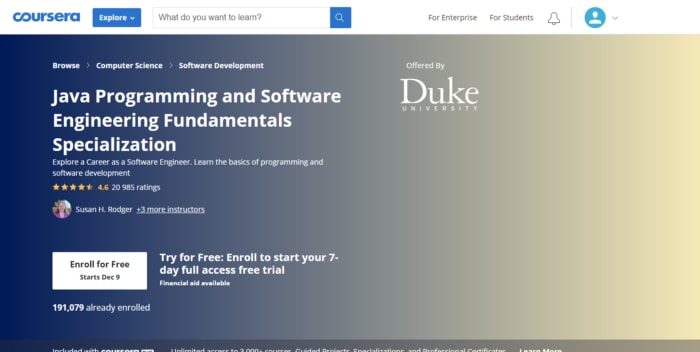 Consider the other course that covers Java programming and software engineering fundamentals. Other than learning about arrays, lists, and structured data, principles of software design, and solving problems with software, you can also grasp an idea of programming foundations with JavaScript, HTML, and CSS.

The Community Is Ever-Growing, Active, and Friendly

Other than a myriad of learning courses, tutorials, books, and challenges, Java is also known for its huge and active community. It plays a key role in the life of everyone who sooner or later joins it — the community supports both newbies and professionals, helps to solve problems, allows sharing knowledge, and remains one of the biggest sources of the latest coding news.

There are hundreds of active Java forums and groups, but I would like to distinguish just a few of them:

The Java community encourages active participation and engagement in discussions, as well as promotes assistance and help. This allows newcomers to feel confident and safe — they will not be left without support.

There Are Numerous Publicly Available Libraries at Hand

Another reason to go ahead with Java is its extensive libraries used by developers from the whole world. Moreover, many non-profit organizations and large companies, such as Google and Apache, continue releasing libraries available in open access. They significantly influence the process of Java development, making it faster, easier, and more efficient.

Because most libraries are publicly available, newcomers are often recommended to google the needed functionality before even starting to write code. The chances are the functionality already exists across the open-source library and has been previously tested by professional devs.

If you are casting around for Java libraries to start with, consider several of them:

Did I manage to answer your question “Why should I learn Java?” Hope a little information about this programming language has convinced you that it is a good option to start with. So, go ahead with Java and make the next year your game changer.

How To Develop Successful SaaS Apps in 2023? A Step-By-Step Guide

Once suspended, alexxxismyname will not be able to comment or publish posts until their suspension is removed.

Once unsuspended, alexxxismyname will be able to comment and publish posts again.

Once unpublished, all posts by alexxxismyname will become hidden and only accessible to themselves.

If alexxxismyname is not suspended, they can still re-publish their posts from their dashboard.

Thanks for keeping DEV Community safe. Here is what you can do to flag alexxxismyname:

Unflagging alexxxismyname will restore default visibility to their posts.