Problems we have faced in most past projects, such as

Atomic Design is all about creating and maintaining robust design systems, allowing you to roll out higher quality, more consistent UIs faster than ever before. This artical introduces a methodology for thinking of our UIs as thoughtful hierarchies, discusses the qualities of effective pattern libraries, and showcases techniques to transform your team's design and development workflow.

Atomic Design is a methodology used to create web designs. This principle is based on the concept of first creating elements and then putting them together to make sense for the user. This way of building a website from the ground up has many advantages compared to other ways of constructing websites. At Open Social we try to break down designs into the smallest (logical) re-usable parts. Re-usable also means consistent. The basic idea is that a website is build from scratch without designing all the pages separately. There are a few steps that needs to be taken when using this method.

In projects where there are a hundred or two hundred components, it is not easy to remember everything. The need for some kind of a design system appears when we start to get overwhelmed by the count of components on a project.

The first step is building atoms. Atoms are buttons, labels, inputs, etc. They are all small items that are used widely across a website. Starting with this step allows a designer to create a library with a lot of elements that can be re-used without creating them over and over again. 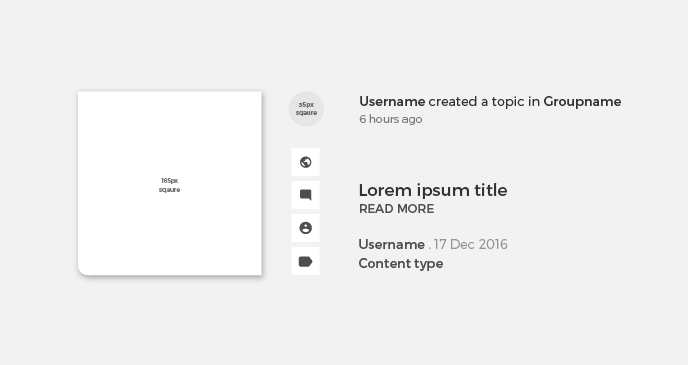 “Molecules are a group of atoms that are put together”. As an example you can see how we build up an activity stream item. Think of a title, read more button, visibility status, comments icon, etc in one card. With this step we’re aiming to generate components that can be reused on other places as well such as news teasers, topic teasers, etc. 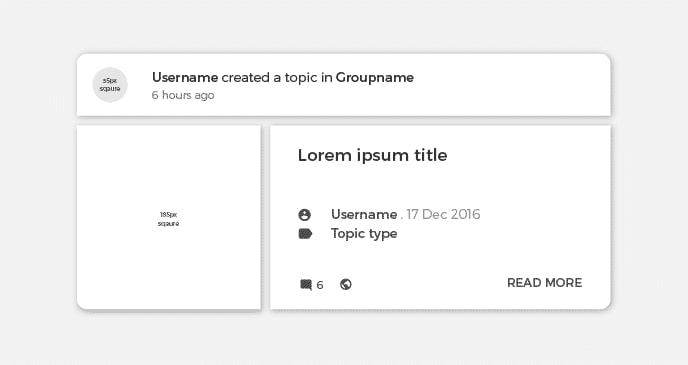 For example an Activity Stream item on Open Social is a group of individual items that are put together to make sense. You can see a username, a thumbnail image, title, comments, etc.. Our front-end team can put an “organism” directly into a layout. It is not dependent on other molecules or organisms. 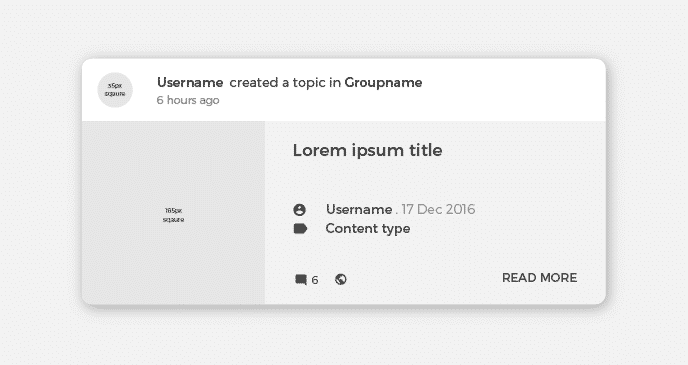 With this step we’re leaving the biochemistry analogy. At this stage in the process we’re creating visuals that actually makes sense for in our product. For this example we have put all the details in place. The username, profile image, title, etc. At this stage we’re not creating fully designed pages. 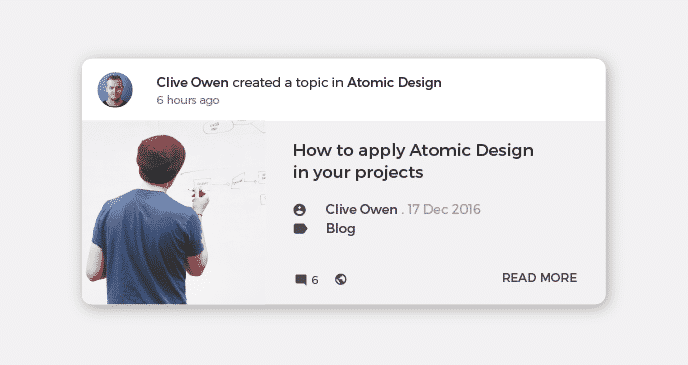 These are the actual pages that we have been designing since the beginning of webdesign. In the case of our activity stream cards we will create a page with a menu, activity stream, footer, etc.. At this stage the whole context is clear. These are the pages that will be exported and send out to the product owner for review. With Open Social the role of the product owner is to have a vision of what he wishes to be build, and communicate this to the team. The way we are doing this is to work with a backlog filled with user stories.

Atomic design ensure developers are all on the same page, to atomic levels.

Typescript ensures developers are all on the the same page, to an even deeper level - everything needs to be defined and expected.

You can define what comes in and out of you components and be strict making your atoms, molecules and organisms even more robust.

Programs written in javascript do not know the data type of a variable until that variable is assigned a value at runtime.

Check types at compile time and throw an error if the variable is ever given a value of a different type. Intellisense which saved the day more time than I can count.

When we have designed a project using Atomic Design it’s fairly easy to keep the project up to date. Since there is a lot going on in terms of improving the platform we can update every atom the way we want. It automatically changes everywhere in the project. This allows us to show the team what effect specific changes in the design will have on the project and it allows us to quickly show the product and process feedback without having to change it everywhere.

- You can mix and match components

By breaking down components into basic atoms it's easy to see what parts of the site can be reused, and how they can be mixed and matched to form other molecules and even organisms.

- Creating a style guide is simple

If a site is created according to Atomic Design principles from the start, all the atoms and molecules that are created before the site is built can serve as a basic style guide. Even for sites that haven't been built atomically, it isn't difficult to extrapolate the basic components and put them together to construct more pages. Bear in mind, though, it is always best to create a site atomically from the beginning, rather than trying to introduce Atomic Design principles to a site later on.

The code of an atomically designed website is typically much easier to read than one created a more traditional way. This is true not only during the time of creation, but in the future when a site is being looked back on for reference or small tweaks.

With Atomic Design, you use predefined atoms to create the site layout, it is easy to see which components are being used for different parts of the site. This reduces the chances of writing duplicate code.

For example, if someone creates a site without using Atomic Design and they require, say, a red button, they would have to look through the whole site to try and find an existing one. If this did exist, they would need to copy and paste that code to the new instance. If there were no red buttons, they'd need to create a new one. With Atomic Design however, it is easy to go back through the list of atoms and find that exact red button.

Although Atomic Design is very common when it comes to markup (HTML), I believe these techniques can also be used for CSS, JavaScript, or any other languages used to create a site to make overall code more modular and reusable.

So it’s important to keep in mind that at the start, the atomic design approach will require plenty of extra effort to implement, yet it will all pay off in the long run! You don’t just create a bunch of buttons and pages. You create a system. It will therefore allow you to have a system that is fully documented and can be scaled for dozens of your client’s projects (think of all the time & money you’d save on). So now that you know the benefits of integrating an atomic design system into the workflow processes.

How to build a multi-step form using React.js + Material UI

From PHP to JS ecommerce: Migrate from Magento and stay open source 🤩

Once suspended, aliraza1603 will not be able to comment or publish posts until their suspension is removed.

Once unsuspended, aliraza1603 will be able to comment and publish posts again.

Once unpublished, all posts by aliraza1603 will become hidden and only accessible to themselves.

If aliraza1603 is not suspended, they can still re-publish their posts from their dashboard.

Once unpublished, this post will become invisible to the public and only accessible to Ali Raza.

Thanks for keeping DEV Community 👩‍💻👨‍💻 safe. Here is what you can do to flag aliraza1603:

Unflagging aliraza1603 will restore default visibility to their posts.