*ReactJS * works by using components. It makes the code more reusable. These components have a specific lifecycle where they get life and work on the code then it goes into hibernation. Before starting about the component lifecycle, we need to know what is component in ReactJS?

A component is a block of a react app. Multiple components are basically blocks of the react app having a specific HTML render output in it. So we can say the starting component is App.js in the prebuilt react file. Which can be connected with the other components for routing or building the site more dynamic and useful.

So this is somewhat an idea about components and what a component really is in ReactJS. But we were talking about the component lifecycle. These components work in a cycle where it maintains 3 steps. They are:

Anyways, so in this phase the component mounts in the DOM using a default state. In the functional component the code will be similar like this.

In the above code the useState hook mounts the variable to the dom and after that it will prepare itself for updating phase.

componentDidMount() is invoked immediately after a component is mounted (inserted into the tree).

2. Updating
Updating happens when an existing dom is being changed or manipulated. These updates can be handled by state or props. From the above we somehow got a glimpse of state. But props is a value which is passed by another component. It's a read only property which is received like an argument in functional components. If we update the code by setting a new state the code will be like this:

From the above code, I’ve set the new setCounter value to 5 so the code will start counting from 5 instead of 0. Also the onClick function is updating the state on every click.

If the variable or the state is changed then the render function happens. Before that the updating process keeps going on.
componentDidUpdate() is invoked immediately after updating occurs. This method is not called for the initial render.

3. Unmounting
The component will unmounts when the component is being removed from the DOM. componentWillUnmount() is invoked immediately before a component is unmounted and destroyed. Perform any necessary cleanup in this method, such as invalidating timers, cancelling network requests, or cleaning up any subscriptions that were created in componentDidMount().

Though in react documentation it's clearly said that, “You should not call setState() in componentWillUnmount() because the component will never be re-rendered. Once a component instance is unmounted, it will never be mounted again.” 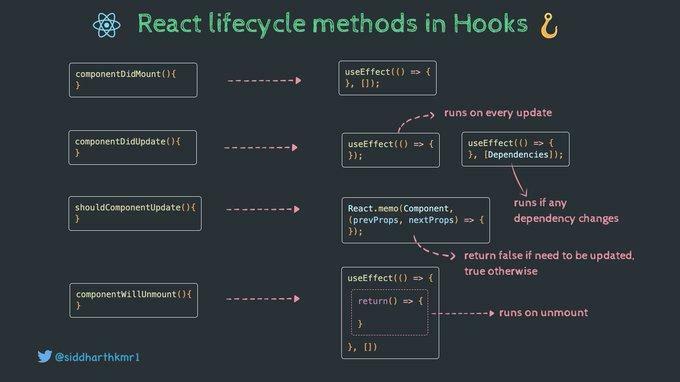 How to Run Emulator Outside Android Studio

Fahim Hossain
Welcome to the Custom Components from Styled-Components!
#react #styledcomponents #beginners #css
Redux Toolkit & its usage What is CRUD!

Once suspended, alter80 will not be able to comment or publish posts until their suspension is removed.

Once unsuspended, alter80 will be able to comment and publish posts again.

Once unpublished, all posts by alter80 will become hidden and only accessible to themselves.

If alter80 is not suspended, they can still re-publish their posts from their dashboard.

Once unpublished, this post will become invisible to the public and only accessible to Fahim Hossain.

Thanks for keeping DEV Community 👩‍💻👨‍💻 safe. Here is what you can do to flag alter80:

Unflagging alter80 will restore default visibility to their posts.