I was just a few months out of the Flatiron School, had gotten my bearings in
the codebase at my first job, and was starting to take on more responsibility. I was sitting with a product manager—let's call her Sierra—trying to explain the technical impact of a product idea she had proposed. And I was frustrated.

No matter which way I explained it, she just kept getting confused. Why couldn't she understand that making these changes would drastically increase response time on a critical endpoint? It was a simple workflow involving 2 microservices and a NoSQL database, and she didn't even have to understand the details, just how they were connected together on a high level.

At some point, I realized: No one had ever given Sierra any level of technical explanation of the system whose development she was supposed to guide every day. Instead of going further with the conversation, I asked, "Why don't we set up a meeting just to describe the basic outline of the system? Nothing overly detailed, just enough to allow us to have a conversation about how product concepts will impact the real-life product when they're translated into code."

To my surprise, she agreed. To my further astonishment, I actually enjoyed the meeting more than any other I'd had since beginning my software development career. We slowly built up a diagram of the parts of the system relevant to her job, clarified confusing points, and made sure every bit of explanation was clear to her.

At the end of the meeting, Sierra thanked me and said, "You know, no one's ever done this for me. This is going to significantly improve my ability to come up with ideas and communicate with developers. I'd really like to understand more about the technical elements of the project, but there never seem to be opportunities for me to learn."

At that moment, I realized something that has become a theme in my career: The most significant impact you can make on a product isn't through design, code, marketing, sales, or customer support. It's building bridges, enabling people of varied backgrounds and skills, each with their own perspectives and spheres of understanding, to work together through effective communication.

A Series of Fortunate Events

As I continued to mature and advance in my career, I ended up taking on the role of a more senior developer and mentor, as well as having more say in the work I was doing. Although I saw myself taking on more responsibility, there was no event that sparked a big change, until...

In late 2016, I attended RubyConf in Cincinnatti, where I heard Paulette Luftig's talk, "Finding Your Edge Through a Culture of Feedback". She ended with a few recommendations for books to read, and I decided that this should be the next step for me. There are many fantastic texts about developing skills in communication, team-building, empathy, and other soft skills; I'd be cheating myself of personal and professional growth if I didn't take advantage!

A few days after the conference, I bought a number of books recommended in that talk, plus a few I'd seen suggested around the internet. And so the fun began... 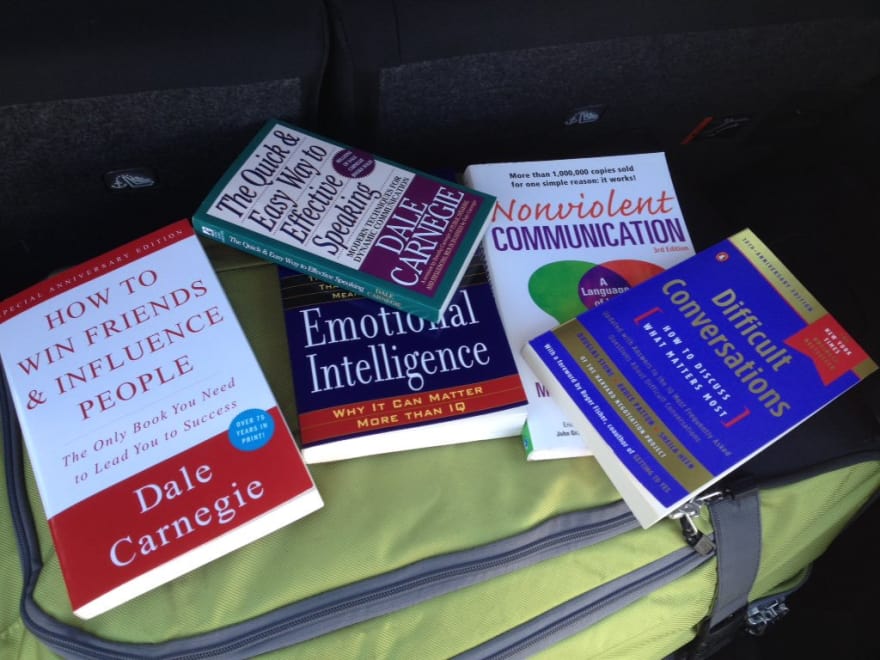 Anyone wanna #BookClub on some of these?

I wanted more, so I ordered books online. Like a good programmer, I was approaching stack overflow... 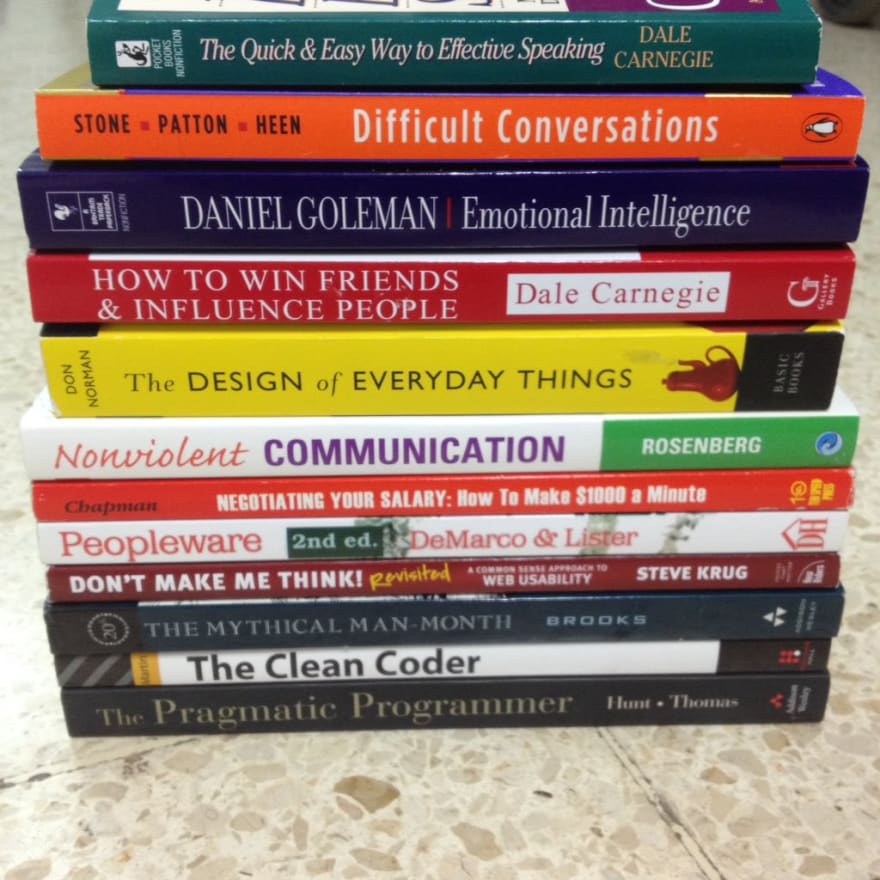 As a reminder, if you want to join me in journeying through these empathy- (& sometimes dev- too!) related books, ping me, let's #BookClub!

It was difficult to stay motivated and keep reading, so I knew I had to actually get serious about making this thing happen. Also, I would get a lot more out of it if I could discuss my thoughts with others. So I decided that RailsConf 2017 would be the Big Bang for Dev Empathy Book Club. I designed a site, set up a book club on Goodreads, and walked into the conference ready to recruit.

Justin Herrick gave a workshop about team-building and communication, so he seemed like a good person to try; he was! Amy Unger approached me in response to a tweet and asked to join as well; I was certainly delighted to have another thoughtful voice actually approach me about the club! So we had a panel.

I also gave a lightning talk (which I'm far too proud of) about a silly little hack, and used the opportunity to plug the project. So we got a bit of free marketing.

Then everyone went home, and the real work began.

Reading a dense book and actually trying to incorporate some ideas into your life every 2 months is a reasonable but still significant commitment. Even more difficult is coordinating with other people to make time for a panel discussion, keeping online materials up to date, and generally promoting the project. Dev Empathy Book Club is important to me because I think it adds a much-needed voice of compassion and humanity to the commotion in our industry. But it takes a lot of time and effort.

We also needed to evolve. Goodreads has a very unfriendly system for managing a club, and the forums weren't easy to use. So we moved to an open Slack channel. Then, we wanted to make it more interactive, less a pure announcements conduit, so we started a monthly open discussion in Slack.

We also needed to be flexible. With a small number of panelists (though we're looking to grow!), sticking to a schedule has been a real challenge, resulting in 5 instead of 6 books covered over the last year. We're hoping to do better this year, to provide a more consistent experience for participants in the club.

This Just Got Real

While being part of Dev Empathy Book Club, I took on an informal team lead role within my working group. Since we went through a few management-related books at the same time (The Mythical Man-Month, Radical Candor, Peopleware), I had the opportunity to think about the ideas conveyed and experiment in a real-life work environment. I saw that people respected me because I invested a lot of thought into how teams work in general, and how to make my specific team more effective and simultaneously much happier.

Then, a month ago, I was informed that I would have an opportunity to move into a management role at my company.

A year ago, I would have been terrified, if the opportunity had even been presented, which of course it wouldn't have. I wasn't ready. Now, while I didn't walk into the role as an expert (it takes a lot of experience to get there!), I could consider myself educated enough to know how to learn the rest. A year of investment truly paid off.

What Are You Waiting For?

Even if management will never be your thing, soft skills are the big differentiator between people who write code and people who solve real-world problems using code. They might save you wasted years of effort by solving the people problems that would otherwise have mandated countless lines of code. And they will definitely make you happier in your job. You have to deal with other people all the time; may as well learn to enjoy it and make the most of it!

Becoming a more empathetic, compassionate, kind person with better communication skills will probably be the most valuable investment in your career (and possible your life in general).

Is Dev Empathy Book Club right for you? If you're looking for something concrete and consistent to add to your routine to develop personally and professionally, check it out!

You can find out more information on our site, devempathybook.club.

Once suspended, amcaplan will not be able to comment or publish posts until their suspension is removed.

Once unsuspended, amcaplan will be able to comment and publish posts again.

Once unpublished, all posts by amcaplan will become hidden and only accessible to themselves.

If amcaplan is not suspended, they can still re-publish their posts from their dashboard.

Once unpublished, this post will become invisible to the public and only accessible to Ariel Caplan.

Thanks for keeping DEV Community safe. Here is what you can do to flag amcaplan:

Unflagging amcaplan will restore default visibility to their posts.