What is Front End Testing?

Why Front End Testing Is Needed

Essentially, testing Front-End testing can be divided into 3 categories: 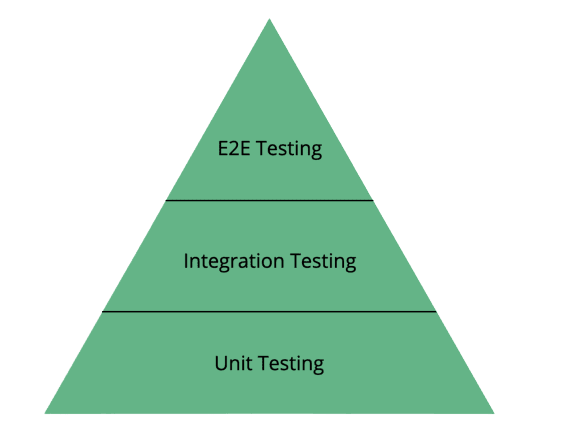 E2E Testing or end-to-end testing, is the practice of testing if the execution of an application is performing as designed from start to finish. The entire application is tested in real-world scenarios, which includes testing the communication between components such as the database, network, APIs etc. and executing your code in a diversity of browsers. Basically testing everything. It takes a lot of time to set up and costs the most.

Integration Testing consists of testing the interaction between elements of your application, for example, communication between your UI and an API. It takes a shorter amount of time to set up, and isn't too expensive.

Unit Testing is different as it consists of testing isolated parts of the code, as units. These units usually take the form of methods, properties, UI element actions etc. It is the fastest and cheapest to implement.

You've probably noted that the higher you go in our pyramid, the more time and money it takes to set up our tests. That's why a lot of projects tend to focus on unit tests as they can help you know if your code truly works by covering most scenarios, save time, and simplify deployment processes.

Jest is a JavaScript test runner that lets you access the DOM via jsdom. While jsdom is only an approximation of how the browser works, it is often good enough for testing React components. Jest provides a great iteration speed combined with powerful features like mocking modules and timers so you can have more control over how the code executes.

React Testing Library is a set of helpers that let you test React components without relying on their implementation details. This approach makes refactoring a breeze and also nudges you towards best practices for accessibility. Although it doesn’t provide a way to “shallowly” render a component without its children.

Step 1) Find out tools for Managing Your Test Plan.

Step 3) Set the timeline for the entire process.

Step 4) Decide the entire scope of the project. The scope includes the following items.

Getting Started with React

Loadables - a simple way to load data in React

Once suspended, amiraarafa will not be able to comment or publish posts until their suspension is removed.

Once unsuspended, amiraarafa will be able to comment and publish posts again.

Once unpublished, all posts by amiraarafa will become hidden and only accessible to themselves.

If amiraarafa is not suspended, they can still re-publish their posts from their dashboard.

Once unpublished, this post will become invisible to the public and only accessible to AmiraArafa.

Thanks for keeping DEV Community 👩‍💻👨‍💻 safe. Here is what you can do to flag amiraarafa:

Unflagging amiraarafa will restore default visibility to their posts.