Alright, you've dabbled with web developments, made a few projects here and there, deployed a few applications that helped you grasp essential concepts of Front-End development, from routing, server-side rendering, state-management to asynchronous queries etc.

But there's one thing you haven't put to practice, either because you were willingly avoiding it, or simply because you didn't see its use: testing. More specifically, Front-End unit testing, one very important part of the testing ecosystem.

I posted this very article on my blog earlier today and wanted to have some feedback from you all, enjoy !

I'll just go over the basic knowledge to understand the role of unit testing in your everyday applications.

Essentially, testing Front-End code can be divided into 3 categories: 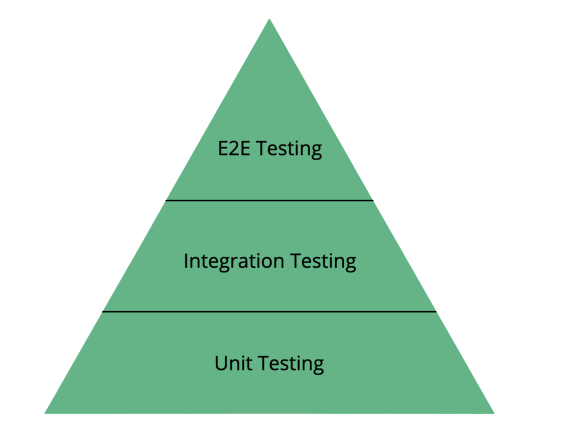 E2E Testing or end-to-end testing, is the practice of testing if the execution of an application is performing as designed from start to finish. The entire application is tested in real-world scenarios, which includes testing the communication between components such as the database, network, APIs etc. and executing your code in a diversity of browsers. Basically testing everything. It takes a lot of time to set up and costs the most.

Integration Testing consists of testing the interaction between elements of your application, for example, communication between your UI and an API. It takes a shorter amount of time to set up, and isn't too expensive.

Unit Testing is different as it consists of testing isolated parts of the code, as units. These units usually take the form of methods, properties, UI element actions etc. It is the fastest and cheapest to implement.

You've probably noted that the higher you go in our pyramid, the more time and money it takes to set up our tests. That's why a lot of projects tend to focus on unit tests as they can help you know if your code truly works by covering most scenarios, save time, and simplify deployment processes.

Example of a unit test ⚙️

Before we get into it, it's worth mentioning what a testing framework is.

A testing framework allows you to easily set up your testing environment and run test suites. You could see testing frameworks as what React or Vue are to UI development, they give you a multitude of tools and make your life easier by doing so.

I would immensely recommend Jest as it is commonly seen on most projects and is maintained by a great team of engineers at Facebook. Note that I will be using this framework in my examples.

I'll be covering a few basic examples of unit tests, so let's get to it. If you want to follow along, feel free to use a website called TDDBin.

Let's break down the code:

Other tests we could add

Here are some other tests that would be reasonable to add for this example:

Testing our method's error handling (when anything other than a number is passed as parameter):

Note: you may have seen that we used toThrow() and not toBe(). Jest offers a multitude of matchers to check if a value matches a given result. So you can check if a value is null, true, greater or less than etc.

Alright, I've shown a pretty unrealistic example of unit testing, so let's try it on a real component from start to finish.

I've created a project using create-react-app, which comes out-of-the-box with Jest set up. Whatever framework you're using, most of their CLIs configure Jest for you, so it's just a matter of creating your test files and writing your tests ! If you're not using one of those CLIs or just need to configure Jest from scratch, feel free to read up on their getting started documentation.

Now, let's install Enzyme which will allow us to test our components' output by rendering them. Note that there are many well known tools that can be used to test Front-End applications, Jest and Enzyme being some of the most well known.

Let's follow their introduction documentation by installing the necessary packages:

We then need to set up our adapter by creating the following file:

Note: if you're using an older version of React, make sure to configure the right adapter for the version you're using, feel free to read up on their installation documentation.

You may have noted that create-react-app creates the following unit test:

All test files have a similar format: *.spec.js or *.test.js depending on your preference. I personally always use the first format. 😄

Try it out by running npm run test in your console. You should get the following output:

We'll now build a basic counter application that lets the user click on a button to increase a value on the screen. The source code can be found here so feel free to clone or fork the repo to try it out.

So where do we start? Ask yourself what aspects of the component we could test, in this case:

Enzyme's JQuery-like syntax and Jest's assertions make it extremely easy to test these cases, here's how we should go about it:

You probably noticed a couple of things, so let's go through the code.

Alright, on to our second test.

Testing events is made very simple thanks to Enzyme, here's how we test that a click to our button increases our counter:

We use the simulate method on the button wrapper to trigger the event and then check our title to see if it is equal to 1.

An important concept to grasp is code coverage, it represents the percentage of your code being tested.

And could look something like this (based on our previous example):

One of the most used code coverage tools our there is called Istanbul and is used by create-react-app to report your application's code coverage when you run the following command npm run test --coverage.

Tools like Istanbul generate a code coverage report in the form of HTML files that can help you have an overview of what parts of your code haven't been tested. It highlights the specific lines not covered during your unit tests to help you reach that sweet 100% coverage.

Note: code coverage isn't everything and 100% coverage doesn't mean you've tested every scenario for a given component, so you should only strive to it when it makes sense.

As noted by @edaqa, code coverage can be seen as a bad metric, as it may "provide a false sense of security by equating lines executed with lines tested" amongst other problems. So use it with caution as a way to have an overview over how much of your code is covered, and by not confusing a metric with an objective.

Here are some things that I didn't talk about that deserve to be mentioned, in no particular order:

I believe this is enough information for a single introduction to Front-End testing and should get you on your way to learning many, many things about unit testing as a whole.

Testing may feel like a time-consuming and useless practice to you right now, but believe me, you will eventually realize how relevant testing an application is. It will help you debug and structure your code, save time, reduce technical debt, improve your workflow and overall boost your productivity on the long run.

As always, thank you so much for taking the time to read this, I hope you've learned something along the way.

If you have any questions please feel free to send them to me on Twitter @christo_kade, and if you enjoyed this post, following me will give you a heads up whenever I upload anything new !

How to Build a Slack Clone with a Chat API