I'm going to tell you how I built a Godot client/server game deployed on DigitalOcean Apps. Well, it's more of an experiment than a game at the moment, but I thought it's worthwhile sharing as Godot server resources on the net seem to be scarce, let alone deployment of such.

The game will be an online single-player persistent-universe game. The server should support multiple players playing on the same server, each in their sandbox.

Initially choosing Python and Phaser3 for development, my partner humbly asked me why don't we use an existing game engine, and I did not have a decent answer to give. Recalling a famous quote from somewhere around the web: "make games, not engines." I decided I have to try at least making a proof-of-concept for this kind of game, using a game engine. Enter Godot. Why not Unity? See further down this article.

By leveraging the Godot's High-Level multiplayer networking API I can have the engine handle tasks such as syncing state between the server and client as well as issuing bidirectional commands between the peers. The client might send a "get star system data" or "fly a spaceship to planet X" and the server might report a random "space dragon attack" event or any other game-related data and logic.

A requirement for the game is running on a browser, so I chose the WebSocketMultiplayerPeer class in the GDScript code.

We are developers, I'll talk less and show more code.

The peer.active_relay = false command is so the server does not broadcast the connection of each peer to all the other connected peers (thanks LordDaniel09).

Forgive me for all the OK assertions, I am rather new to Godot and a combination of not knowing what I'm doing and compiler warnings made me do that.

This code will initialize a server or connect to one depending on some feature or command-line argument. To run the server I just run this from the project's folder:

You need the server build of Godot for that. This is what we'll deploy eventually with the Dockerfile on DigitalOcean Apps.

Running the client is simply running godot or running the game from the editor. I also obviously want an HTML5 build so I exported the game rather early and made sure all this Websocket madness works.

Creating a new game or joining an existing one

On the client-side, when we connect to the server, we create a Game Scene locally and then ask the server (peer id 1) to create game 123 for us or let us join the one that is already running. Authentication, unique Game IDs, and game->player association is still something I'm thinking about. More on that soon.

We need the local scene so the hierarchy on the server which will soon create a similar node will be the same for the two peers. This makes Godot happy when doing the high-level multiplayer magic, or so I understand. 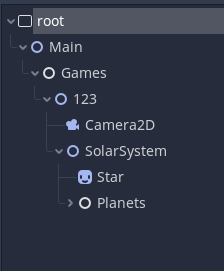 And on the server:

So at this point, both the client and server have "agreed" on the hierarchy and the game can start (or resume as we'll see).

The Game scene contains a Solar System scene. In the future, we might have a Galaxy scene or Planet or any other screen that we might need.

Inside the Solar System scene, we start having interesting fun. Let's look at the _ready() of that scene.

For the client, which is not the network master at any point for any node (besides GUI, which is not networked either way), I call get_planets with call_deferred. As you'll see in the implementation of get_planets, the scene should exist for the client so _ready() should have been run already when this call is made. Well, that's what I tell myself, as without call_deferred I had "Failed to get path from RPC" errors.

The planets are rotating around the star. As part of the POC, I wanted to make sure I get a consistent state between the client and server, even when I refresh or restart the client. So if for example a planet just passed "3 o'clock" and I'd reconnect briefly after, I'll see that planet a bit more towards "4 o'clock" and not in a completely new random position.

It's worth noting that the Solar System scene is initialized on the server once, and I intend to keep it alive as long as the game lives. This will be needed for the whole universe simulation to keep running in the background. The client however will delete and create new Solar System scenes as they go through the systems in the galaxy. There's no need for a client to know all the mysteries of the universe and it would be a waste of resources (think mobile browsers).

At this point, the server and client should have the same state. And the sweet part is that because we run the game on the same engine, then the simulation of the heavenly figures will be in sync without a need to continuously update the positions of the planets.

I will however add additional get_planets call from the client to the server every, say, 10 seconds, just to be sure we are really in sync.

Deploying the server and a static HTML5 website to DigitalOcean Apps

So the only viable option for running this on the DigitalOcean Apps PaaS is with a Dockerfile. Actually two Dockerfiles. One for the main server and the other for building the HTML5 build of the game and hosting that on a static website in the platform.

Searching DockerHub, I found the barichello/godot-ci repo which was a fantastic replacement to my flaky Docerfile build. Basically what my Dockerfile did and the repo's one do is download a copy of godot-headless, which can build things e.g. the HTML5 build.

Let's start with what I called Dockerfile.html5 as it's a bit easier.

We copy the project, build things to some build folder, and then remove the code to keep the image leaner. The build is standalone and does not require the code at all even for HTML5.

For the game server, we also need to download godot-server so the Dockerfile would look something like this:

It took a bit of trial and error to get the build paths right, also for DigitalOcean Apps to pick the static website folder, but I managed eventually.

Deploying the server was pretty easy. For the static website, I needed to use doctl to edit the spec for my App so I can provide a Dockerfile path for the static build.

Then you'd edit the static website's section and add a Dockerfile_path and the now-required output_dir:

And I think that did it!

It was a bit painful, but eventually, I got a game up. When I refresh the browser, I get the planets' state as they are on the server in my little persistent universe, which keeps on turning while I am not actively connected to it.

I think the whole code as a "clone and run" repository is redundant. I gave you the ideas and snippets and you'll educate yourself better if you do some more hands-on on this one.

I lean towards an external auth service such as Auth0 to generate some lovely JWTs for me. Then I would need a way for Godot to validate these JWTs.

When a client connects to the server, I could either use a C# or C++ module that handles JWT validation as suggested here or maybe use a cloud function of some sorts to validate the token before letting the peer know the secrets of the universe.

I chose Godot for 2 reasons.

One, it's open-source and I thought that if I manage to get this game somewhere then a "made with Godot" banner would be very nice for both projects.

Second, Unity's network stack is being re-written at the moment. I did not want to play around with a deprecated API. One could say I can use Mirror for Unity and they would be right, however, when trying this a few months ago I didn't get the HTML5 build to work properly and it's something I want for my game.

Amir Eldor
Python pytest testing with SQLAlchemy for my game
#database #testing #gamedev #python
Early Heroku and App Platform infrastructure, with some thoughts about letting you know when your colony ship has been built
#gamedev #heroku #digitalocean #devops
Introducing a Development Blog about my Online Persistent-Universe Game
#gamedev

Once suspended, amireldor will not be able to comment or publish posts until their suspension is removed.

Once unsuspended, amireldor will be able to comment and publish posts again.

Once unpublished, all posts by amireldor will become hidden and only accessible to themselves.

If amireldor is not suspended, they can still re-publish their posts from their dashboard.

Once unpublished, this post will become invisible to the public and only accessible to Amir Eldor.

Thanks for keeping DEV Community safe. Here is what you can do to flag amireldor:

Unflagging amireldor will restore default visibility to their posts.