Last year we launched a web store on flatlogic.com to sell our admin dashboard templates directly to our customers. Till recently we sold more than 8000 licenses of our templates on a third-party marketplace, so opening our own platform is an important event for us. Reaching this milestone provoked some reflexive thoughts, which I want to share in this post.

It all started in June 2013, when we initially uploaded our first theme called Light Blue to Wrapbootstrap – one of the available bootstrap marketplaces at that time. From today’s perspective, Light Blue obviously looks outdated; however basic features like gradient background and transparent widgets were already in place.

This is Light Blue template right after release in June 2013. 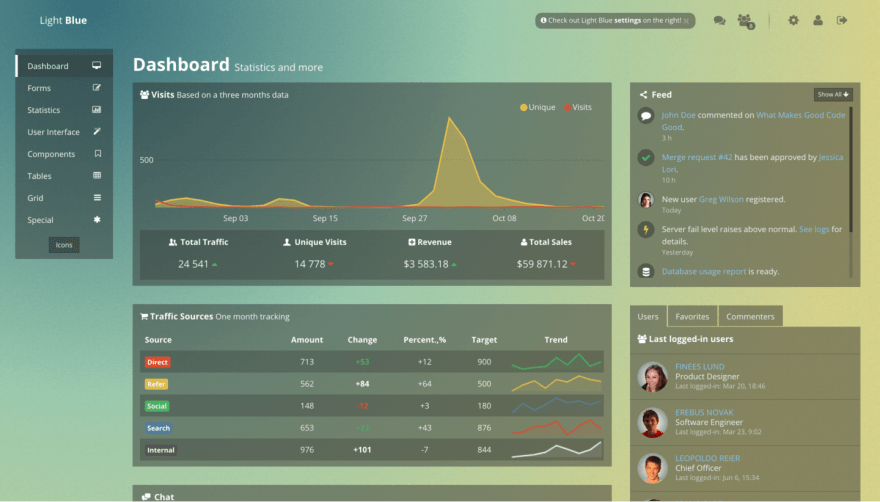 This is not a marketing post, but I want to say that Light Blue was indeed a first admin dashboard template with a gradient background and transparent widgets. I believe template developers were a bit afraid to experiment with the design, so most of the admin templates at that time looked similar: dark colors for a sidebar and light colors for a content area. If you watch all of these fiction movies, you have probably seen how they operate transparent interfaces in spaceships. So an appearance of this trend in design was a matter of time from our perspective. We made a bet on transparent design and created Light Blue which proved itself successful in the long run.

An initial response to Light Blue was excellent. It stayed on top of the marketplace’s front page during a few months and gained lots of sales. I personally felt very proud when I saw other templates getting inspired by a design of Light Blue. 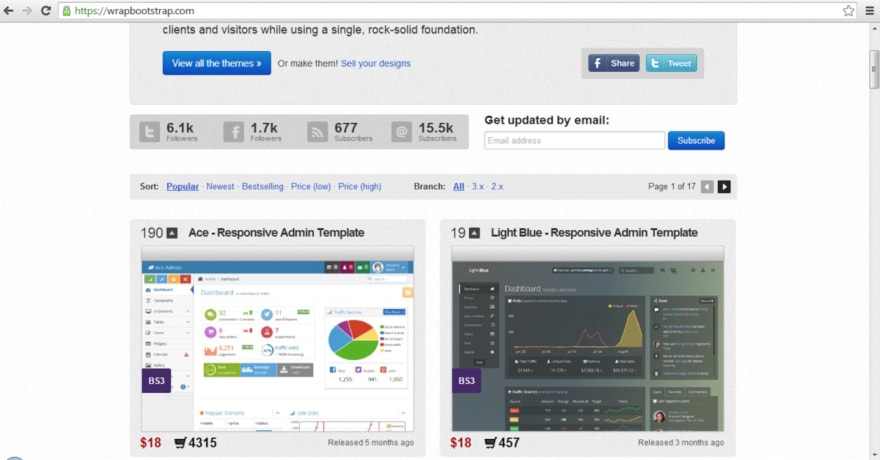 Some template developers went even further and simply copied the design of Light Blue and started selling it on other marketplaces. This, of course, was unacceptable for us, so we had to learn what a DMCA takedown notice is in order to deal with such cases.

During this period we received lots of development inquiries: Light Blue served as a starter project for many companies to build their web apps. It is then we have been approached by large businesses like SC-Networks GmbH in order to build their automation software on top of our template.

The final chart of sales looks as follows: 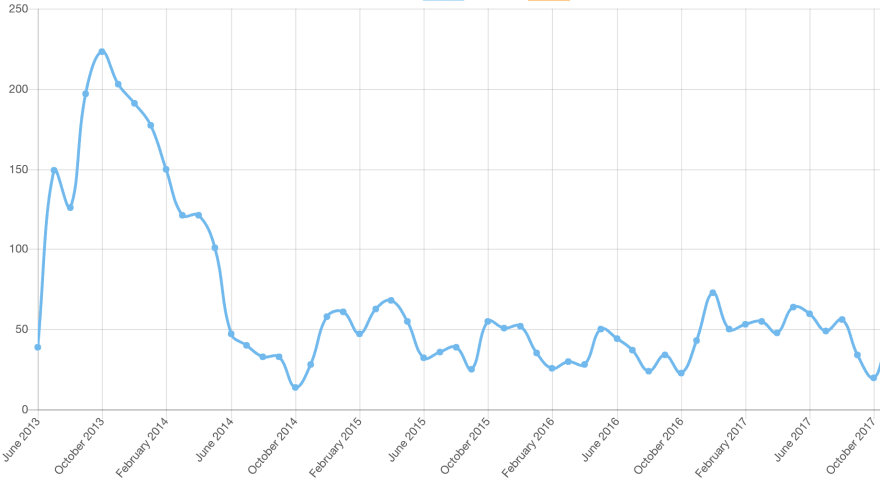 I tend to credit the high spike of sales at the beginning of the chart to the novelty of design. The more transparent analogs appeared on the market, the lesser sales we had. Sales gradually dropped to around 50 per month and stayed on this level during the last four years. In terms of technologies, Light Blue always supported a recent version of Bootstrap and Javascript frameworks, so it must not be the reason for the drop.

The only conclusion I can draw from these statistics is that admin templates market is very competitive: as soon as you release some popular feature, it will be copied by competitors in a pretty short period. So in order to stay on the top one has to constantly keep adding new features to the product. Which we, of course, did with a second template.

Light Blue was a marginal template in terms of design. Fancy designs are good for expositions, but not for everyday use. For an application that one uses every day, a template must have very smooth and unobtrusive design focused on content like charts, texts, graphics, etc.

Hence Sing App looked classically: dark sidebar with a light content area. We also came up with an idea of moving sidebar – it is only when a user hovers the mouse over a sidebar it becomes visible; otherwise, it stays closed. 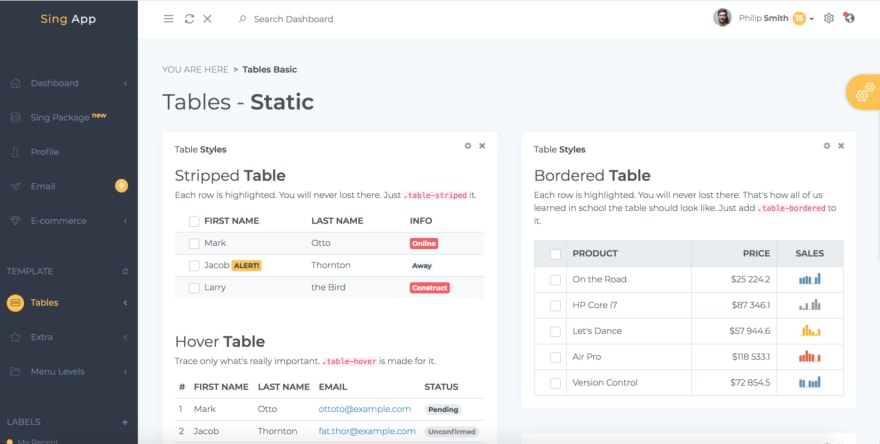 Initial sales were average and stayed on a 50/month level for the whole year. Then Google announced an early release of Angular 2, so we decided not to miss an opportunity and to ride a wave! It took several months to develop an initial release since Angular ecosystem was very volatile – Google released breaking changes once in a week. Finally, we shipped it, and Sing App was the first admin template worldwide to support Angular 2. This gave us a huge boost in sales and integration requests.

We have been contacted by many large and small business again in order to build web apps on top of Sing App. We participated in many cool projects like drone data analytics platform and booking management system, where Sing App served as a backbone of the application. 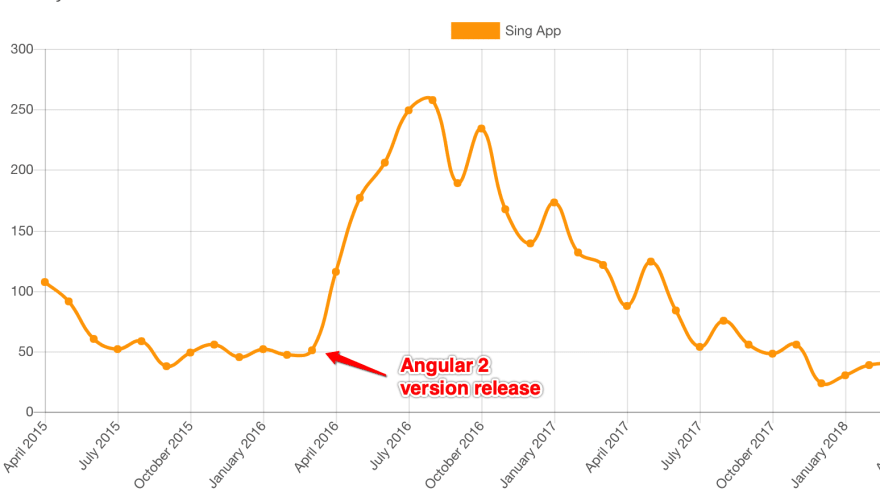 Popularity lasted for a year: other template authors were catching up and released Angular 2 versions too. We kept supporting and releasing new versions like React and Vue for both templates. Also, our team was involved in lots of integration projects, so having around 100 sales per month was enough. Until we realized selling on a third-party marketplace was not a scalable solution.

Marketplace vs. Own E-commerce Store

Selling on a marketplace obviously has one, but huge benefit: there is no need to spend any resources on marketing, which makes this a favorite path for template developers, who do not have marketing skills. That’s it. From a seller perspective, there are no more benefits. I tried to search for some articles on this matter and found a pretty similar analysis, where the author highlights the same points.
Now let’s go to downsides. There are a lot.

First, according to a marketplace fee structure we had to give up $10 from every $35 dollar purchase, which left us with only $25. So if we made 100 sales per month it means that we paid at least $12,000 per year as marketing costs! I mean like, come on, we could invest this amount of money into google adwords and attract the same or even bigger amount of traffic (well that’s in theory of course).
Second, we did not know who our customers were. We did not know either email or any other contact details in order to gather feedback and create a better product.

Third was brand recognition. People contacted us and said they bought our templates from Wrapbootstrap. They did not even know our company exists! I am more than sure they would not come back to Flatlogic in order to buy more products, they would come back to the marketplace.

As soon as we realized all of these points the final decision was obvious: we need to move away from the marketplace to our own store. Of course, in order to sell via the store, we had to a) build the platform itself, and b) attract enough traffic to generate sales. We felt like we had enough expertise in both areas, so we decided to give it a try and developed the whole platform in three months, including design and appropriate marketing positioning.

The final signal to completely move our templates away was that the marketplace failed to make payouts three months in a row.

From the early beginning, Wrapbootstrap was not focused on building great relations with its authors. For example, our own themes were reviewed for months before being approved. You can google for wrapbootstrap issues and find lots of developers complaining about this marketplace on various forums. Lots of themes never received any feedback at all.

It seems that James Simmons, Wrapbootstrap owner, was a developer and as James says himself, he got bootstrap marketplace idea from a comment on Hacker News in 2012.

I have a feeling that James treated his marketplace more like a side project rather than a serious business: during five years no new features were added. I think Wrapbootstrap perfectly caught the wave and created the marketplace in perfect time, right when Bootstrap started to gain popularity. However, James failed to grow it into something bigger to fully leverage the opportunity.

From July to September 2018 none of the Wrapbootstrap authors were paid. Moreover, lots of people tried to contact James via email and telephone, but he did not respond. After three months of silence, he made all of the payments but did not provide any explanation for a delay. For most of the authors, this was the last straw that broke the camel’s back. Top themes like Inspinia and SmartAdmin moved to a newly created marketplace. Some authors simply shut down their themes. For us, this was also a last red flag. Since by that time we had our platform ready we moved our templates there.

Anyways, I cannot say only negative things about this marketplace: we have been successfully selling our themes during five years, lots of developers found templates and lots of template creators made a living by selling themes there.

Since the beginning of 2018, we have been working a lot identifying our market niche and trying to find a perfect intersection of our skillset and market demand. We think that there is a place for a truly premium themes vendor that competes with sites like Themeforest and other marketplaces on a quality basis, not price. Therefore we launched our own web store, to sell themes directly to our clients.

In a small research, which we held internally, we determined three key features of a successful template: a) design quality, b) amount of pages and components, c) long-term support and maintenance. So the secret sauce is clear, and that’s why we are going to steadily grow in all of these directions, building long-term relations with our clients by providing truly premium products and support. Of course, we will not be able to be perfect from the beginning, so another key ingredient is the ability to take and apply feedback from our customers. This is why we are eagerly waiting for it 😉

To be more specific, in the nearest future we plan to provide more pages for our dashboards: blog article and lists, more e-commerce pages, investment and asset management dashboards, project and contact management tools, issue trackers, etc. Also, there will be completely new products with fresh designs and maybe some UI kits.
Originally published at https://flatlogic.com/blog/from-selling-admin-templates-on-a-marketplace-to-creating-our-own-platform-a-story-of-flatlogic/

As a developer through and through, is there any other job you could see yourself doing besides coding?