In this post, I'll talk about how a bot tweets translations of Urdu words to English.

Why this bot
How the bot works
- How the Oxford Dictionaries API works
- The difficulties in using the API
- The workarounds
- How do the tweets happen
Where's the code
Why this bot, again

I know Urdu. At least, I think I know Urdu, chiefly because I know the lyrics of practically every popular Hindi film song ever made. But film songs are ... poems, and there's this thing called poetic license, and then, not all words always mean what I might think they mean.

And I am not alone. Dozens of people around me, growing up following the major religion in India (which is 'Films') know and quote lyrics off the cuff, but don't always know the exact meaning of certain words. For example, I (and hundreds of others) went through teenage and the rest of our lives thinking jigar means heart. It doesn't. Nope.

So, when I chanced upon the Oxford Dictionaries API, which includes an Urdu dictionaries endpoint, I thought, "Why not make a tweet bot?"

How the bot works

It picks a Urdu words one by one from a list I give it, supplies those words to the Oxford Dictionary API endpoint, gets the JSON responses, parses the responses to pick the translations, and tweets the Urdu words and their English translations.

Its requirements are as follows:

How the Oxford Dictionaries API works

It serves a JSON response through REST endpoints that are well-documented2.

The actual translations of a word are contained in a list of dictionary objects; the list is called results.

Each dictionary object in this results list has a key called lexicalEntries. If you drill down from there, you finally arrive at a list called translations where a dictionary key called text contains the actual translation. The following image shows the complete sequence, with the translation highlighted in a red box : 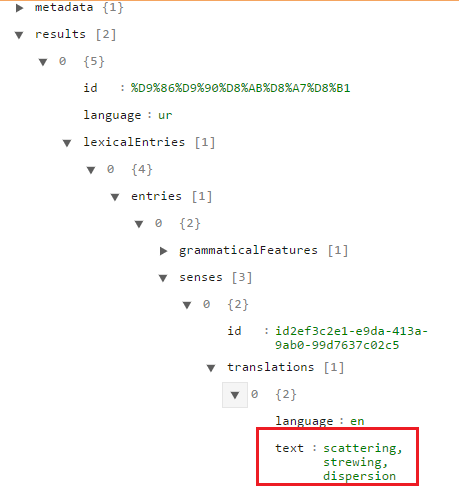 A word can have several meanings and, therefore, several translations. How would one know how many meanings exist? Well, one looks at the number of items in the senses list for every dictionary object in the results list. Here's the hierarchy of senses:
['results'] > ['lexicalEntries'] > ['entries'] > ['senses']

The difficulties in using this API

The script. The difficulty is the script.

Urdu, as spoken in its daily form in India, is indistinguishable from Hindi. Urdu, when written, is written in a script called Nastaliq. I don't know how to read Nastaliq3. The Oxford Dictionaries API takes input only in the Nastaliq script. Uh oh!

Because none of these workarounds were feasible, I had to generate a word-list manually. I used Platt's dictionary to make my word-list. I would type the Urdu word in Roman script, and copy the Nastalikh version of it in my word-list.

How do the tweets happen

Why, on GitHub of course. Where else?

Why this bot again?

Because other resources - bot tweets, emailed WOTDs, non-bot tweets - are either boring or overwhelming. The design goals for this bot were:

So, that was the story about my first tweet bot. What do you think?

alfaaz is an Urdu word that means 'words'. (Urdu has a different word for the singular word 'word'; it is lafz.)

In its spoken form, Urdu is practically indistinguishable from Hindi. However, for writing, the two languages use different scripts. Hindi uses Devanagari; Urdu uses Nastaliq. The sentences in each language would be exactly the same, but written in two totally different writing styles, whose major differences are these:

I am technical writer. I taught myself Python so I could explore all of the interesting APIs out there. At the moment, I am building a Mahabharat chatbot (API too, hopefully?)

This is an anonymous post sent in by a member who does not want their name disclosed. Please be thoug...

Exploring the path of a new and unfamiliar codebase

Anindita Basu
@aninditabasu
I am technical writer. I taught myself Python so I could explore all of the interesting APIs out there. At the moment, I am building a Mahabharat chatbot (API too, hopefully?)
location
India
joined
May 30, 2017