What is Canary Testing?

Canary Testing is a method used to test new functionality or features in production with reduced risk and minimal impact on users. In this testing method, the new feature or new version of the product is released to only a small group of users at a time. This gives minimal exposure to the new feature, allowing teams to validate the new changes without affecting the user experience at large.

The term canary testing originates from the coal mines terminology. Canary birds were once used in coal mines to test for dangerous levels of odorless toxic gases in the mine. The presence of dangerous gases would kill the canary before it could kill the miners. So, if the canary is alive, singing happily inside the mine, then miners know they can keep working. The death of a canary bird would prompt the miners to evacuate the mines immediately.

So like a canary bird works as an early signal for coal miners to evacuate the mines before the dangerous gases reach them, the end-users testing the new service or product also provide an early warning for any glitches before the feature is released for all users. In both cases, the canary and the users are not aware that they are being used for testing. The analogy fits perfectly, hence the testing is named canary testing.

Canary test is performed after the product is tested in a sandbox environment. The process for canary testing is automated. So if there is any indication of errors, the release can be quickly reversed.

How does Canary Testing work?

The basic premise of canary testing is the idea that the new features are deployed to only a certain percentage of users. The canary test can be performed by different deployment strategies like blue-green deployment or even by using feature flags. 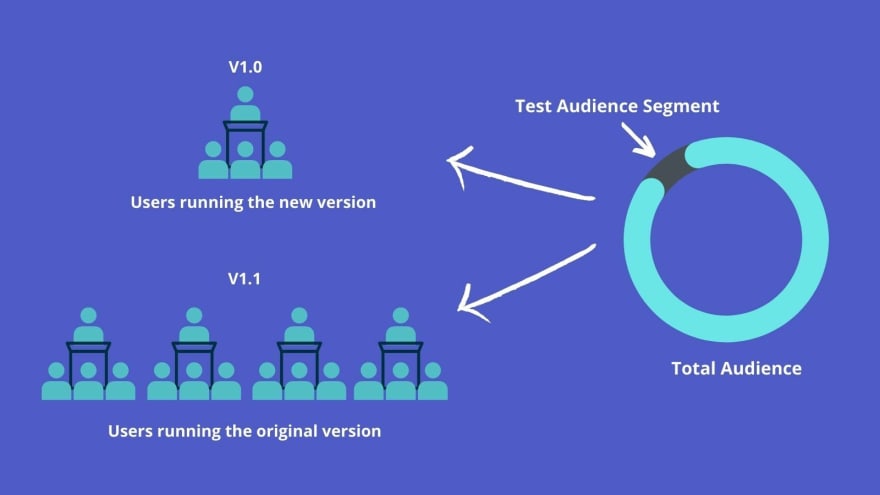 Performing this deployment methodology, teams can look out for, analyze and even prevent downtimes, revenue effects, bugs or errors, and the overall sentiment of customers towards the new feature. This is a way to quickly learn about how the new features will be received by users to then formulate an informed strategy for the code version.

So in canary testing, once the product is tested for a few users, it is rolled out to more users in phases. This largely minimizes the risk of deploying new features and gives the team an opportunity to solve problems that might turn fatal if ignored.

A different method to run canary testing is by using feature flags. Feature flag or feature toggle is a software development process that allows you to turn a feature on or off during runtime without deploying code.

Feature flags, unlike the blue-green deployment, don't make use of multiple production environments. Canary testing is performed using feature flags, as feature flags enable teams to separate the process of code release from simple feature enablement. So the team can simply turn a feature on or off remotely for a certain percentage of users without affecting the original version.

For canary testing, using the feature flags, teams can roll out new features to only 1% of users and validate the feature for all the key metrics. If the team comes across any errors, the feature can be easily turned disabled by using feature flags.

Once the team has tested for all possible errors and metrics the new feature can be rolled out to 100% of the user base in phases.

Continuous Delivery is a software development process that allows teams to easily deploy new code changes into the production environment. As the name suggests, there is a continuous upgrade to the previous code version. So teams work on changes to the code in short cycles, so the new code can be tested and deployed frequently. It is a method quite commonly used to deliver improved software quickly to your end-users.

Hey! If you liked this article, you should also consider checking out these articles on building your products:

Once suspended, anjalivanga will not be able to comment or publish posts until their suspension is removed.

Once unsuspended, anjalivanga will be able to comment and publish posts again.

Once unpublished, all posts by anjalivanga will become hidden and only accessible to themselves.

If anjalivanga is not suspended, they can still re-publish their posts from their dashboard.

Once unpublished, this post will become invisible to the public and only accessible to Anjali Vanga.

Thanks for keeping DEV Community 👩‍💻👨‍💻 safe. Here is what you can do to flag anjalivanga:

Unflagging anjalivanga will restore default visibility to their posts.