Image on the cover is not really related to the article content, it just to catch your attention. It's Berkhamsted castle in UK.

In this small post, I want to share our experience that we had related to FE deployments and how we improved it in the end.

In my company, we are using an approach that is very popular nowadays, when a big app consists of apps divided by functionality (and usually supported by separate teams) and called micro-frontends (I will use abbreviation mFE from now on).

Approach with mFE's as NPM packages

This is a setup that we had before the change was made.

Each micro-frontend is an npm package that is published to the private registry and later consumed by the "main" app that is composing many of these micro-frontends to become one app and look like a monolith to the user. 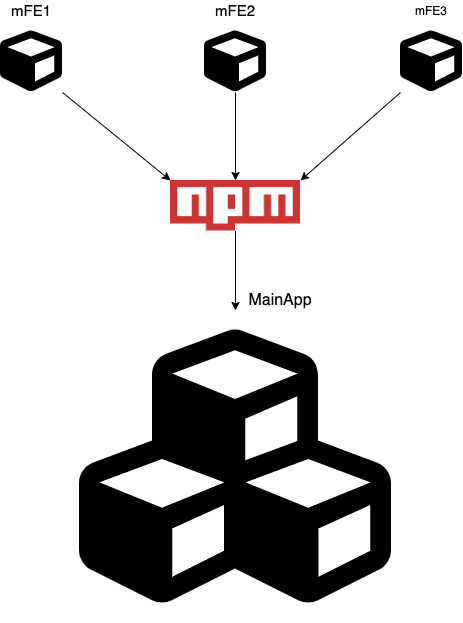 So each mFE has its own repo with its own CI pipeline and usually managed by a separate team. The final step of mFE pipeline is publishing a new version of the npm package. To test something on staging you create a canary release package. To revert - you change the version of the package to the previous one and rebuilt the main app.

The main app is built and deployed to the CDN bucket where it is becoming publically available.

Let's assume the developer from the team that manages mFE1 needs to do a really small fix, for example, change button color. He will do a 1 line change and push this code to mFE1 repo: 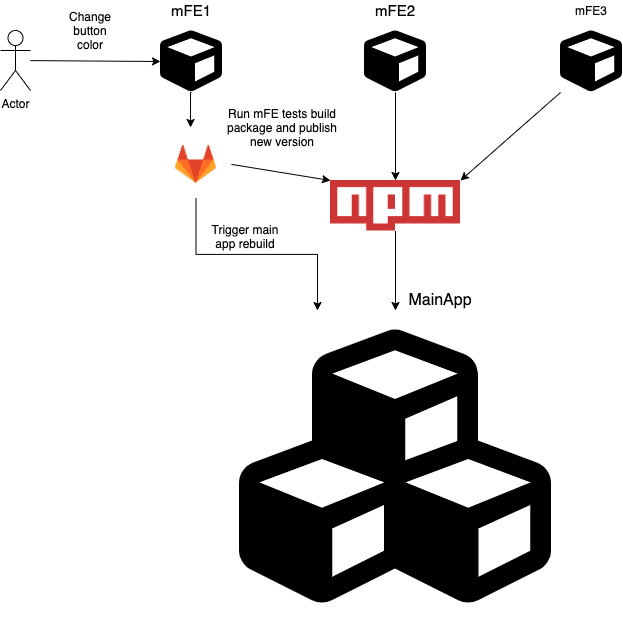 From the image above you can clearly see that this approach has some downsides:

So we decided to change the situation to allow teams to deploy their changes without the need to redeploy the main app.

After creating RFC and analyzing possible solutions to our problems we were left with 2 possible approaches:

We discarded the module federation approach because:

import-maps is a proposal that will allow resolving ES imports directly in the browser.

The browser doesn't know where it should look for lodash source. Import-maps allow us to map lodash to some URL with actual code.

Today it is not fully supported by browsers, actually, it is supported only by Chrome and you need to enable a special feature flag to use it. So we had to use SystemJS module loader to support most of the modern browser versions.

Pipelines of mFE's were changed to output system-js compatible bundles and deploy them to CDN instead of publishing npm packages. Also, we created separate repo that holds import maps JSON files with its own pipeline, the purpose of the pipeline in this repo is to update JSON with a new bundle file name when we need to deploy or revert the mFE.

mFE CI pipeline triggers import-maps repo pipeline with GitLab downstream pipelines feature passing the new version filename. This file name is used to update the import-maps JSON with jq, committed to the repo, and deployed to CDN. This was mFE CI don't need to have any code related to updating import maps in their own pipelines.

So now to do a small change, like button color we don't need to rebuild the main app, we can build and deploy mFE independently which increased delivery speed to prod almost 3 times. 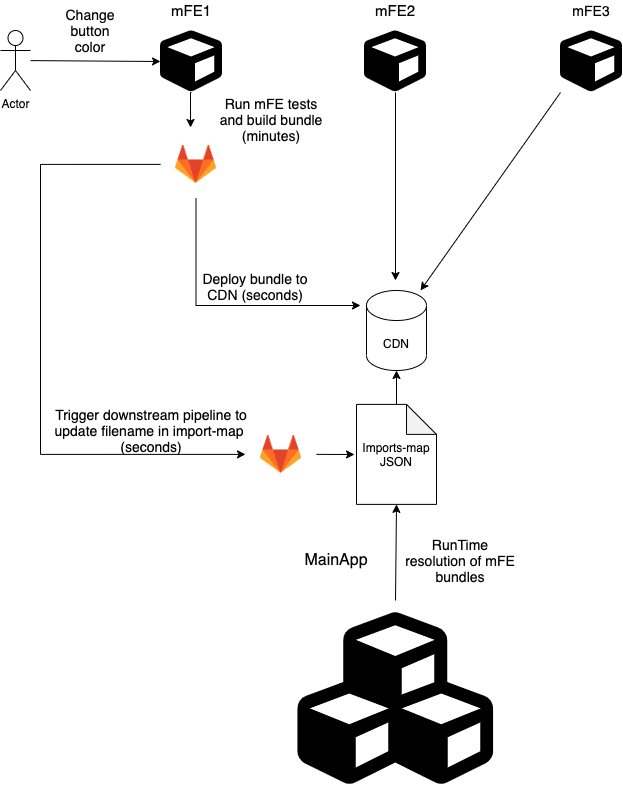 When you go to the user dashboard website the main HTML contains a reference to import-map and meta declaration of the import-map type:

And the import-map JSON file itself looks like this:

To resolve mFE app module on runtime we created this custom hook:

So far we migrated 4 mFE's, and it works very well us.
Each mFE bundle is published to it's own folder in CDN bucket. Static assets also published in the same folder, and we use __webpack_public_path__ to set the public path on the fly.

We have an automatic retention policy on the bucket that removes files older than 90 days.

With the previous setup, we were only exposing one bundle split in chunks. So any change in one of the mFE's was causing the creation of a completely new bundle with new chunks. So it was really hard to cache JS.

In import-maps approach, we are using separate bundles per mFE with hash in the filename and they will be cached by the browser independently. So if mFE was not updated for a while - it will be reused from cache instead of downloading.

Of course, there are some downsides, the main app bundle becomes smaller, but mFE's bundles are now duplicating some of the dependencies that were deduped during the main app build. We extracted react, react-dom to shared packages, but maintaining a big list of shared packages may become a burden that no one wants to carry. So the total size of assets downloaded by end-user increased. The total size of all JS assets is now twice bigger, but if you keep caching improvement in mind it is not that bad.

I want to say huge thanks to Joel for creating such a beautiful website with a very good gathering of documentation related to the microservice architecture of frontend apps. I recommend visiting it if you struggle to understand the terms in this post: SingleSPA.

Oleksandr Odinok
I enjoy writing code and solving problems
You're running an online conference but get called out for having an all-male speaker lineup 2 days prior. Yo, What do you do?
#discuss #serverless #aws
Do you take notes? The story of a Notetaker
#beginners #codenewbie #career
VSCode: my 5 vital extensions to be productive
#vscode #productivity #webdev #javascript

Once suspended, aodinok will not be able to comment or publish posts until their suspension is removed.

Once unsuspended, aodinok will be able to comment and publish posts again.

Once unpublished, all posts by aodinok will become hidden and only accessible to themselves.

If aodinok is not suspended, they can still re-publish their posts from their dashboard.

Once unpublished, this post will become invisible to the public and only accessible to Oleksandr Odinok.

Thanks for keeping DEV Community 👩‍💻👨‍💻 safe. Here is what you can do to flag aodinok:

Unflagging aodinok will restore default visibility to their posts.