What you have already tried

or any other ng commands.

Error produced by the previous command

Before heading into the fix, let me ask a question

Are you sure that Angular is globally installed in your machine? If yes, you can continue to read this article. Else I recommend you to visit the official Angular site and get the latest version installed :)

This problem is caused due to the reason that npm is unable to find ng. There are few ways that we can follow to get rid of this error.

This can be done using the command,

2. Setting the location of npm folder

In this case, you may need to uninstall angular from your machine with the command

4. Giving an alias to ng path

To do this you must know the full path of your angular installation. For example: “/Users/ So the command would be

Note that the above option works for many users but the problem is that this is just a temporary solution. It means that this command works only on your current terminal (same terminal where you ran the above command). Once you close and open a new terminal, the problem seems to reappear.

So how can we permanently solve this? Here comes the solution. Credits: Thanks for this fix.

5 . By adding the PATH directly to the Mac OS terminal

Before doing this we just have to verify whether angular is installed to the base of the user. To check this, in your terminal enter

to get to the base of your files. Then in order to list all your base files, enter

Now you must see “.npm-global” listed in the files. 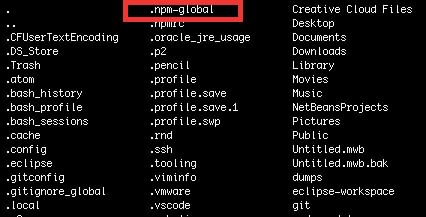 If its not there, again I recommend you to install Angular using the official documentation link I have mentioned in the beginning.

If the folder is listed, you are good to go. Go back to the base of the user using the command

Here we are going to edit the paths using vim editor. Use “sudo” in front of the command to avoid permission issues. Here you will be prompted to enter the device’s password.

The editor now opens a file containing some paths as shown below. All you have to do here is to insert the path of .npm-global/bin to the list. To do so you have to press insert from your mac keyboard (press fn + i key combination), navigate to the bottom of the list and add ~/.npm-global/bin as I have added below.

Now to save your changes and exit, press ESc key and then type :wq vim command which means to write/save the changes and quit. This will bring you back to the terminal window. Now restart your terminal and type

This should give you all the paths with the newly added one concatenated at the end.

There you go! Thanks for reading this article. Have a great day!

How to copy to clipboard with angular material

Angular Inject Function: A New Way To Work With DI

Adding the ESLint to an Angular application

Once suspended, apdharshi will not be able to comment or publish posts until their suspension is removed.

Once unsuspended, apdharshi will be able to comment and publish posts again.

Once unpublished, all posts by apdharshi will become hidden and only accessible to themselves.

If apdharshi is not suspended, they can still re-publish their posts from their dashboard.

Once unpublished, this post will become invisible to the public and only accessible to Angela Amarapala.

Thanks for keeping DEV Community 👩‍💻👨‍💻 safe. Here is what you can do to flag apdharshi:

Unflagging apdharshi will restore default visibility to their posts.