In this article, I'm going to discuss about my Bachelor's degree final project, which is about evaluating the robustness of OCR systems (such as Tesseract or Google's Cloud Vision) when adversarial samples are presented as inputs. It's somewhere in-between fuzzing and adversarial samples crafting, on a black box.

It's an old project that I recently presented at an International Security Summer School hosted by the University of Padua. I decided to also publish it here mainly because of the positive feedback received when presented at the summer school.

I'll try to focus on methodology and results, which I consider being of interest, without diving into implementation details.

I published this ~1 year ago - not sure if it still works as described here. Hopefully it does, but I'm pretty sure Google made changes to the Vision engine since then.

Let's start with what I considered to be plausible use cases for this project and what problems it would be able to solve.

Now, let's focus on the different constraints and challenges:

Modern OCR systems are more complex than basic convolutional neural networks as they need to perform multiple actions (e.g.: deskewing, layout detection, text rows segmentation), therefore finding ways to correctly compute gradients is a daunting task. Moreover, many of them do not provide access to source code thus making it difficult to use techniques such as FGSM or GANs. 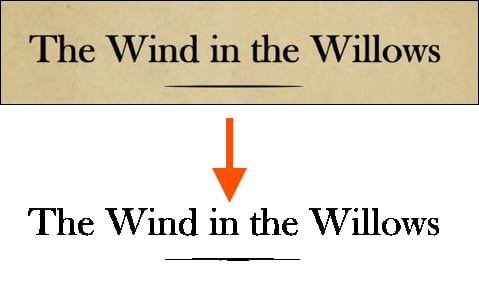 An OCR system usually applies a binarization procedure (e.g.: Otsu's method) to the image before running it through the main classifier in order to separate the text from the background, the ideal output being pure black text on a clean white background.

This proves troublesome because it restricts the samples generator from altering pixels using small values: as an example, converting a black pixel to a grayish color will be reverted in the binarization process thus generating no feedback.

This is specific to Tesseract, which is rather deprecated nowadays - still very popular, though. Modern classifiers might be using this method, too. It consists of performing 2 iterations over the same input image. In the first pass, characters which can be recognized with a certain confidence are selected and used as temporary training data. In the second pass, the OCR attempts to classify characters which were not recognized in the first iteration, but using what it previously learned.

Considering this, having an adversarial generator which alters one character at a time might not work as expected since that character might appear later in the image.

This refers to the fact that the input data is rather 'limited' for an OCR system when compared to... let's say object recognition. As an example, images which contain 3D objects have larger variance than those which contain characters since the characters have a rather fixed shape and format. This should make it more difficult to create adversarial samples for character classifiers without applying distortions.

A direct consequence is that it greatly restricts the amount of noise that can be added to an image so that the readability is preserved.

OCR systems will attempt to improve their accuracy by employing dictionaries with predefined words. Altering a single character in a word (i.e.: the incremental approach) might not be effective in this case.

For this project, I used Tesseract 4.0 for prototyping and testing, as it had no timing restrictions and allowed me to run a fast, parallel model with high throughput so I could test if the implementation works as expected. Later, I moved to Google's Cloud Vision OCR and tried some 'remote' fuzzing through the API.

In order to be able to cover even black box cases, I used a genetic algorithm guided by the feedback of the targeted OCR system. We observe that the confidence of the classifier, alone, is not a good metric for this problem, a score function based on the Levenshtein distance and the amount of noise is employed.

One of the main problems here was the size of the search space which was partially solved by identifying regions of interest in the image and focusing only on these. Also, lots of parameter tuning...

Given the constraints, the following properties of the noise model must be matched:

Applying salt-and-pepper noise in a smart manner will, hopefully, satisfy the constraints.

Initially, the algorithm worked using only overtext mode, which applied noise in the rectangle which contained characters. However, this method is not the best choice for texts written using smaller characters mainly because there are less pixels that can be altered thus drastically lowering the readability even with minimal amounts of noise. For this special case, the decision to insert the noise in-between the text rows (artifacts) was taken in order to preserve the original characters. Both methods presented similar success rates in hiding texts from the targeted OCR system.

Just for fun, here's what happens if the score function is inverted, which translates as "generate an image with as much noise as possible, but which can be read by OCR software". Weird, but it's still recognized... 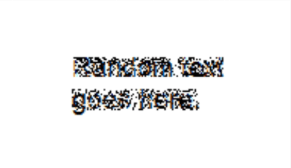 Promising results were achieved while testing against Tesseract 4.0. In the following figure is presented an early (non-final) sample in which the word "Random" is not recognized by Tesseract: 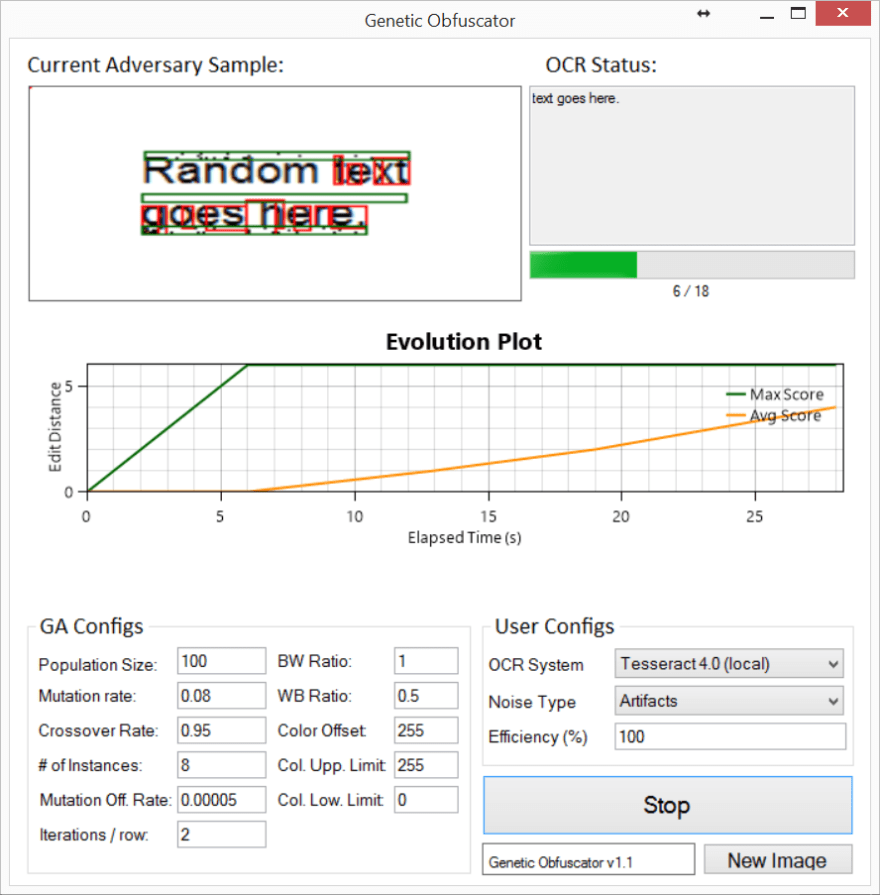 This is where things get interesting.

The implemented score function can be maximized in 2 ways: hiding characters or tricking the OCR engine into adding characters which shouldn't be there.

One of the samples managed to create a loop in the recognition process of Google's Cloud Vision OCR, basically recognizing the same text multiple times. No DoS or anything (or I'm not aware of it), I'm still not sure if the loop persisted or not - it either produced a small number of iterations, failed (timed out?) or they had load balancers which compensated for this and used different instances.

Let's take a closer look at the sample: below, you can see how the adversarial sample was interpreted by Google's Cloud Vision OCR system. The image was submitted directly to the Cloud Vision platform via the "Try the API" option so, at the moment of testing, the results could be easily reproduced.

Also the 'boring' case where the characters are hidden:

It works, but the project reached its objective and is no longer in development.
It seems difficult to create samples that work for all OCR systems (generalization).

Also, the samples are vulnerable to changes at the preprocessing stage in the OCR pipeline such as:

However, we can conclude that, using this approach, it is more challenging to mask small characters without making the text difficult to read. I compiled the following graph, in which are compared: the images generated by the algorithm (below 7% noise density) and a set of images that contain random noise (15% noise density). The 2 sets contain different images with characters of sizes: 12, 21, 36, 50. Each random noise set contains 62 samples for each size - average values were used.

Noise efficiency is computed by taking into account the Levenshtein distance and the total amount of noise in the image.

Understanding How to Evaluate Textual Problems

How Bias Sneaks into Machine Learning

Once suspended, apex95 will not be able to comment or publish posts until their suspension is removed.

Once unsuspended, apex95 will be able to comment and publish posts again.

Once unpublished, all posts by apex95 will become hidden and only accessible to themselves.

If apex95 is not suspended, they can still re-publish their posts from their dashboard.

Once unpublished, this post will become invisible to the public and only accessible to Dan Sporici.

Thanks for keeping DEV Community 👩‍💻👨‍💻 safe. Here is what you can do to flag apex95:

Unflagging apex95 will restore default visibility to their posts.