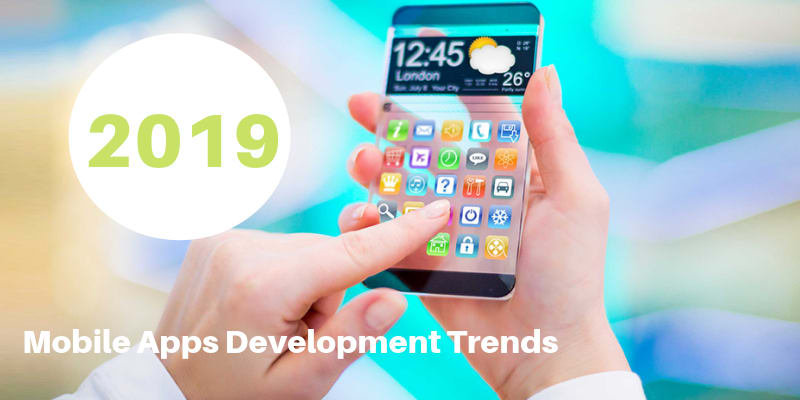 For the first time ever, growth in the smartphone segment declined in 2018. No, the market is still expanding at an impressive rate but not as fast as before. This is a clear indication that with around 3 billion users, the market is reaching a pivotal point from where the engine of growth is shifting from hardware to software and services. After all, through smartphone sales are faltering, the market for mobile app users is larger than ever.

That is, for businesses that rely heavily on mobile apps 2019 presents an immense opportunity for growth given they readily evolve with new trends. If you are one such business, here are top mobile app trends you need to watch out for in 2019:

IoT has been dubbed an “emerging” technology for quite a long time but 2019 would finally be the year when it would realize its true potential. There are two key reasons for its inevitable surge.

First, as virtually everyone now owns a smartphone; people are starting to acquire other smart devices ranging from watches and fitness bands to speakers and home appliances. There are smart toilets, pillows, and even sex toys- all of which ultimately need mobile apps as an interface. That is, the more people buy IoT devices, the more demand for mobile apps would rise.

Second, 5G is set to launch in the first quarter of 2019 and given that its properties- low latency, high resilience, and high bandwidth are perfectly suited for IoT ecosystems, we expert massive growth in the segment and as explained above, growth in IoT devices effectively translates into mobile app growth.

While AR too has been around for quite some time, 2018 was a significant year owing to the fact that both iOS and Android released their AR SDKs- ARKit and ARCore. It’s been already a few months since their launch- enough for developers to play around and cross the initial learning curve. In 2019, we can expect the technology to gain prominence with new products and integration into existing popular apps.

VR, on the other hand, still seems to be stuck in the early adoption phase and though there might be some activity in the segment in 2019- maybe some new headsets or more integration with gaming consoles but there is little scope for it to capture wide consumer market.

As the number of smart devices and mobile apps balloon this year, businesses would need powerful intelligent tools to make sense of the immense amount of data that they would collect. Currently, AI and ML are deployed only by large applications with massive footprint but as such tools become cheaper and accessible (due to integration with cloud services), more and more businesses would move towards building intelligent apps.

The three above mentioned technologies can be considered the staple of mobile app development trends for the coming year. Apart from that, there are also many other smaller trends that we that combined shape the app development industry in 2019. Some of those trends include:

Google has been long pushing for PWAs and there are also quite a lot of popular apps that have embraced the platform. But given that iOS earlier in 2018 released support for PWAs, its growth prospects have drastically increased. The point is, many businesses looking for cost-effective means to reach out to a large number of mobile users would increasingly find themselves inclined to deploy PWAs.

2018 can easily be claimed to be the year of mobile wallets with many new products and increased popularity. But as we move forward, businesses would try and bridge the highly fragmented space with unified gateways for seamless transactions.

As bots get smarter and easier to build, they are attracting businesses for the obvious benefits like reduced costs and higher customer satisfaction. And since they have now proved their worth, you can expect many applications to either switch entirely to bots or at least integrate them at some level. In any case, bot development is set for a major uptick in 2019.

If you have noticed, 2019 won’t be a year of some brand new technology but rather a year when many of the long talked about technologies realize their true potential. And because top app development companies have been building their expertise in these domains for a very long time, there is no shortage of skills for businesses that need to get onboard these mobile app trends.

How We Built a Cross-Platform Library with Rust

Ada James
App development agency is an independent rating firm that evaluates software development companies around the globe to offer clients a transparent and trusted listing.
Guide for Hiring Mobile App Developer for Your Business
#mobileappdevelopment