With a very tiny footprint and lightning fast performance, Git has become the de facto standard for source control management. Branching is an essential feature of a VCS (version control system), that allows developers to diverge from the main line of development and continue their work on multiple features in parallel, without affecting the main line. Branching is often considered as Git's "killer feature" as its incredibly lightweight to perform branch operations, like creating a branch or switching between branches, which are often instantaneous.

This post performs a comparative analysis of the three most popular branching strategies, namely, Git Flow, Trunk based development and GitHub Flow.

The popular branching strategies can be divided into two categories, mainline based and feature based.

Published in 2010 by Vincent Driessen, Git Flow provides a robust workflow with a strict branching model, focusing around project releases. At its core, the repository holds two main branches, with an infinite lifetime:

To aid development and release activities, a variety of supporting branches can be used, which are short lived, unlike the main and develop branches, and aim at providing support for production releases, hot fixes, and parallel feature development. 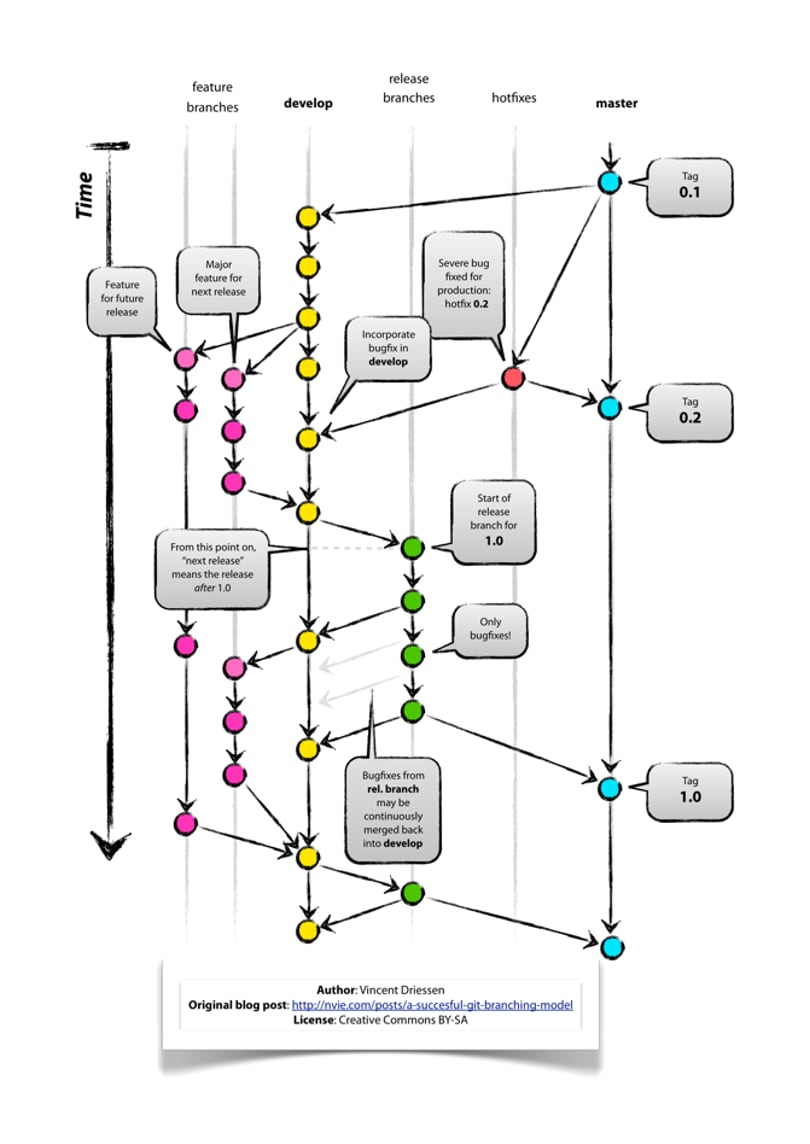 As seen in figure 1 above, Git Flow outlines the below workflow for managing development and release activities:

TBD is a popular version control strategy in centralized version control systems (VCS) and is equally applicable to distributed VCS, whereby developers commit their changes to a shared trunk (or main) branch in repository. The goal of TBD is continuous integration and thereby continuous deployment, which is achieved via a series of small and incremental commits directly into the main branch. 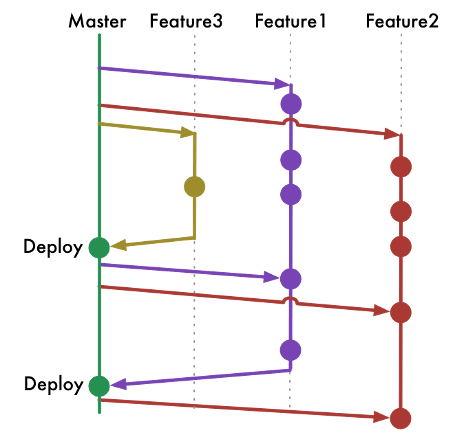 Trunk based development outlines the below flow for minimal branching and continuous delivery:

Created by and extensively used at GitHub, GitHub Flow is a lightweight, branch-based workflow that supports teams and projects focused primarily on continuous delivery. Unlike Git Flow, there are no "releases" to production, deployment happens frequently, almost every day, even multiple times a day.

At its core, the repository holds two types of branches:

As seen in figure 3 above, the GitHub flow outlines the below workflow for managing development and release activities:

How TBD differs from GitHub Flow

Both TBD and GitHub flow follow a trunk or mainline based branching strategy for development and release. However, they differ in one significant way.

In an enterprise with large number of developers working on the same project, GitHub flow could lead to significant wait time as every approved pull request should be deployed to production, leading to a bottleneck.

Hence, for such scenarios, TBD with a predefined release cadence, is preferred, where the deployment occurs after merge to main and the commits present in the main branch at the cutoff date are deployed to production.

Regardless of the branching strategy your team chooses, here are few practices that we implemented to ensure high code quality.

The images are copyrights of respective authors, as applicable.

Once suspended, arbitrarybytes will not be able to comment or publish posts until their suspension is removed.

Once unsuspended, arbitrarybytes will be able to comment and publish posts again.

Once unpublished, all posts by arbitrarybytes will become hidden and only accessible to themselves.

If arbitrarybytes is not suspended, they can still re-publish their posts from their dashboard.

Once unpublished, this post will become invisible to the public and only accessible to Vaibhav Sharma.

Thanks for keeping DEV Community safe. Here is what you can do to flag arbitrarybytes:

Unflagging arbitrarybytes will restore default visibility to their posts.