In this multi-part tutorial, we'll create and deploy a multi-server architecture web application.

Let's dig a little deeper into Adonis and create a Rest API. For this, we'll need to create a data model, routes, and controller. We'll also set up a database table migration and create a seeder to seed the database with.

Adonis makes the standard CRUD operations easily available for you so that you don't have to define everything yourself.

Using Route.resource() will automatically set up all of the typical CRUD routes for you. Let's add in the following route:

What this does is set up our CRUD routes for /movies and assigns them to refer to the MoviesController, in which we'll define later on.

However, since I am making a simple app and am only interested in fetching either all of the movies or a single movie, I'll use .only() to only include the index and show routes.

Run the following command in your terminal to verify that only the index and show routes are created.

To create a new model, use the following command:

This operation creates a new file at /app/Models/Movie.ts and gives us a head start with creating the model.

Recalling the data points that we need for our front-end, we'll define the model class for Movies as follows:

Make a data migration and migrate the database

Run the following command to create a new migration:

This will create a file located at /database/migrations/<timestamp>_movies.ts.

Let's navigate to the migration file and add in the table columns.

Time to migrate the database by running the following command:

Let's double check our database to see if the table migrated successfully.

I like to use TablePlus to manage my databases; so, I'll open that up to check that a migration row was added to the adonis_schema table and that my movies table and it's columns were properly migrated. And... They look good! 🎉

Make a seeder and seed the database

We'll now set up a seeder to seed our database with the example movies that we identified while creating the front-end - Children of Men, The Terminator, and The Sisterhood of the Traveling Pants.

The above command will output a new seeder file at databases/seeders/Movies.ts.

Let's import the Movie data model and then add JSON for the 3 sets of movie details we want to seed our database with.

Now, to seed the database, run:

At this step, I was asked to install luxon prior to being able to successfully run the seed command. You can install this package running the following:

Once you have successfully ran the seed command, go back to your database management client and verify that the data was correctly seeded.

Time to create the controller class!

This will create a controller file at app/Controllers/Http/MoviesController.ts.

Head over to the new file and we'll start by adding in the Movie model.

Next, we'll add in our index function.

The .all() method is a shorthand to query and return everything from the movies table.

We'll use this route for our homepage that displays the list of movies.

Now, for our details page, we only want to return data for a single movie.

Let's add in the following to our MovieController class:

We're passing in params.id in the .find function to pull the movie id from the request url and then looking up the movie in our database using the returned id.

We now have all routes and controller defined. Time to test the API! 😎

To test the API, I'll use Postman; though, you can use your favorite web browser if you do not want to use an API client.

In Postman, I'll make a Get request and add in my local address and append the url with /movies.

This request will trigger the index router and then return the full list of movies as we defined in MoviesController. 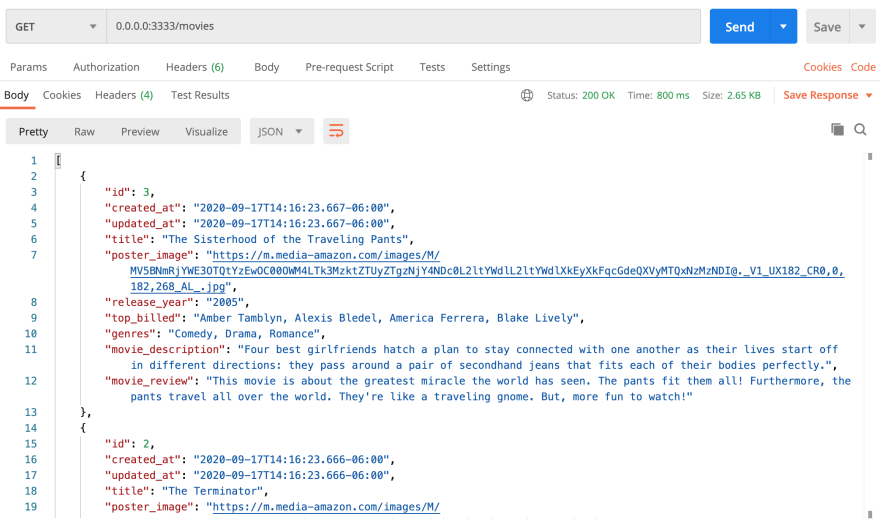 Now, let's check passing a movie id to verify it only returns data for that movie. 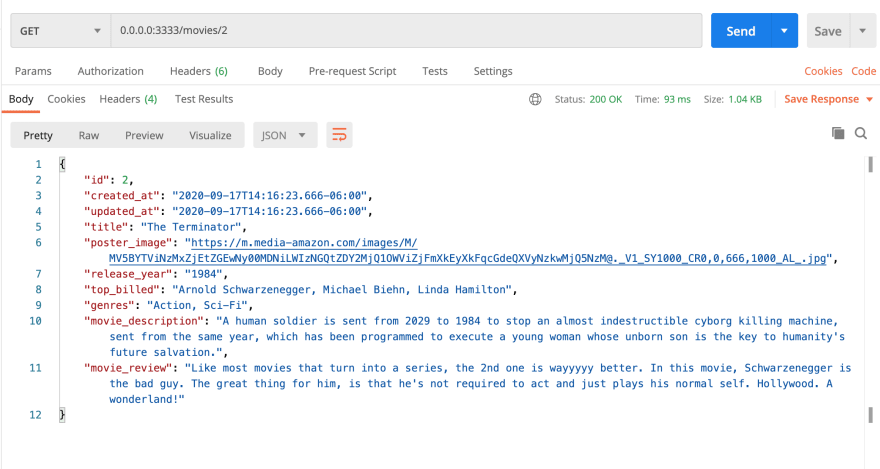 We now have our API ready and will update the front-end to dynamically call and place the data from the API in part 4.

Following along? View Part 2 progress on GitHub at https://github.com/armgitaar/moviesapi.

Building a Scatter Plot in JavaScript