For this contest, you'll only be able to submit projects that you started after this announcement post was published.

Well, I guess I am disqualified. But, leaving this post up as a resource for anyone that may like it.

I am a big fan of Tailscale for a Wireguard VPN mesh. Some months ago, someone requested that Tailscale support an Ansible Galaxy role to set up a Tailscale node. I saw the help wanted tag and knew what I must do.

However, Tailscale supports a large number of operating systems, and I wanted my Tailscale Ansible role to support everything that Tailscale supports. I needed a CI workflow that would test all those systems in parallel whenever I created a new PR.

Ansible role to install and enable a Tailscale node.

This role initializes a Tailscale node.

You must supply a tailscale_auth_key variable, which can be generated under your Tailscale account at https://login.tailscale.com/admin/authkeys.

A Node Authorization auth key can be generated under your Tailscale account at https://login.tailscale.com/admin/authkeys.

Encrypt this variable with the following command:

See Ansible's documentation for an explanation of the ansible-vault encrypt_string command syntax.

Whether to use the Tailscale stable or unstable track.

Stable releases. If you're not sure which track to use, pick this one.

Pass any additional command-line arguments to tailscale up.

The Ansible role can be found on Ansible Galaxy here.

The key for this GitHub Action matrix workflow to work is the following setup in my molecule.yml file:

From there, I can set up which systems to run Molecule against with a matrix:

Important! - You don't want to forget fail-fast: false.
This stops the action workflow from stopping whenever a single job fails. We want each spawned job to run in isolation from the others, so we can independently see which systems are good and which have issues.

Then, we just need a single job definition that uses the distro matrix variable. GitHub Actions will automatically spawn a job for each item in the matrix.

This spawns a job for each matrix distribution: 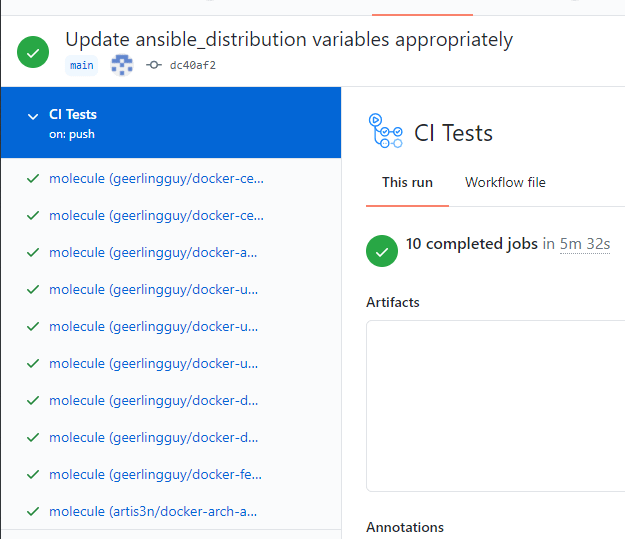 Once suspended, artis3n will not be able to comment or publish posts until their suspension is removed.

Once unsuspended, artis3n will be able to comment and publish posts again.

Once unpublished, all posts by artis3n will become hidden and only accessible to themselves.

If artis3n is not suspended, they can still re-publish their posts from their dashboard.

Once unpublished, this post will become invisible to the public and only accessible to Ari Kalfus.

Thanks for keeping DEV Community 👩‍💻👨‍💻 safe. Here is what you can do to flag artis3n:

Unflagging artis3n will restore default visibility to their posts.