(This article originally appeared on Bearer.sh)

As you begin working with third-party APIs, you'll run into a variety of API authentication methods. The three most common methods to perform authenticated requests with an API are:

Each method has its own pros/cons.

Even if you don't use many APIs, you are likely to encounter all three methods. For example, Mailchimp and Twilio use a basic authentication method. Stripe or Sendgrid have preferred dealing with API Key. While Google, Facebook, and Twitter mostly use OAuth.

If you are using some exotic APIs, you might also discover other methods (like JWT or custom ones). As they are less common today, I'm going to focus on the other ones.

The basic authentication, as we use it today, is 20 years old 🥳 Officially standardized in June 1999, it has been very largely implemented and all browsers still support it out-of-the-box (even IE).

It works by passing an Authorization header alongside the request:

The string Basic indicates that we are using basic access authentication. And the string dXNlcm5hbWU6cGFzc3dvcmQ= is a base64-encoding of username:password.

It's not mandatory to pass a username and password here. For example, Twilio uses [YOUR ACCOUNT SID]:[YOUR AUTH TOKEN].

Contrary to the basic authentication, there's no standard on the API Key. The most common pattern is to pass it alongside the Authorization header:

What's great with API Keys is that id adds granularity to the API. One of the champions in that category is the Stripe API, which on top of a "master" API Key, allows developers to create "restricted keys" that can provide more specific access, like "read-only".

Introduced in 2007, OAuth has a strong focus on the user experience. The core concept of OAuth is that the end-user doesn't share any credentials with the third-party application, i.e. the developer.

Whilst the UX is clearly the best with that authentication method, it's sometimes tricky for a new developer to start with.

There are two reasons for this. First, there is not one-way of doing OAuth, but 5:

Second, it introduces several concepts at once. For instance, it requires to first request an access_token, then it can start to perform API calls, but only for a limited period of time because it needs to refresh that token.

But once you have become an OAuth master 👩‍🎤, you'll see that it looks familiar:

Of Basic, API Key and OAuth, which can you expect to see most often? 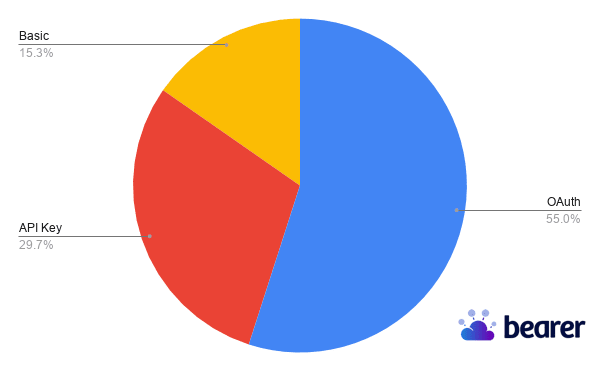 We surveyed 100+ APIs monitored at Bearer.sh and OAuth is the most widespread method 🥳.

📢 The most common API authentication methods was originally published on the Bearer blog.

Once unpublished, this post will become invisible to the public and only accessible to Corentin.