⏱ This tutorial is an introductory walkthrough of creating a Vue app on Begin. It should take less than 15 minutes.

This tutorial uses the Vue starter app, extended by an example API endpoint. You'll have all the capabilities of Vue for building beautiful user interfaces, combined with the power, speed, and security of cloud functions and serverless data storage.

Vue (pronounced like view) is a progressive framework for building user interfaces. The core library is focused on the view layer only and is easy to pick up and integrate with other libraries or existing projects. On the other hand, Vue is also perfectly capable of powering sophisticated Single-Page Applications when used in combination with modern tooling and supporting libraries.

If you’d like to learn more about Vue before diving in, here is a video walking through the core principles of Vue and a sample project.

Although it would be helpful to have some experience with Vue, it's not required to follow along with this tutorial. (Related, the Vue docs are a great reference.)

You do not need to be an expert in any of these things in order to follow along and make your first Vue app in Begin! 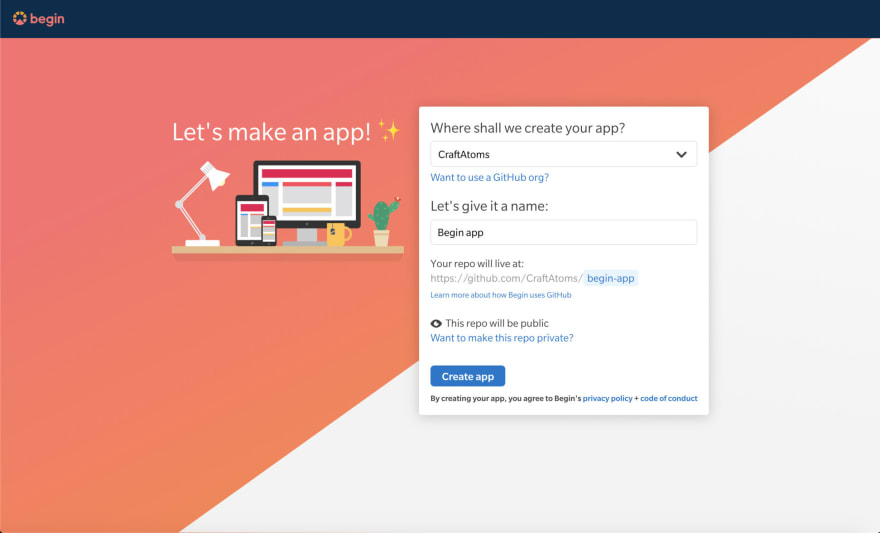 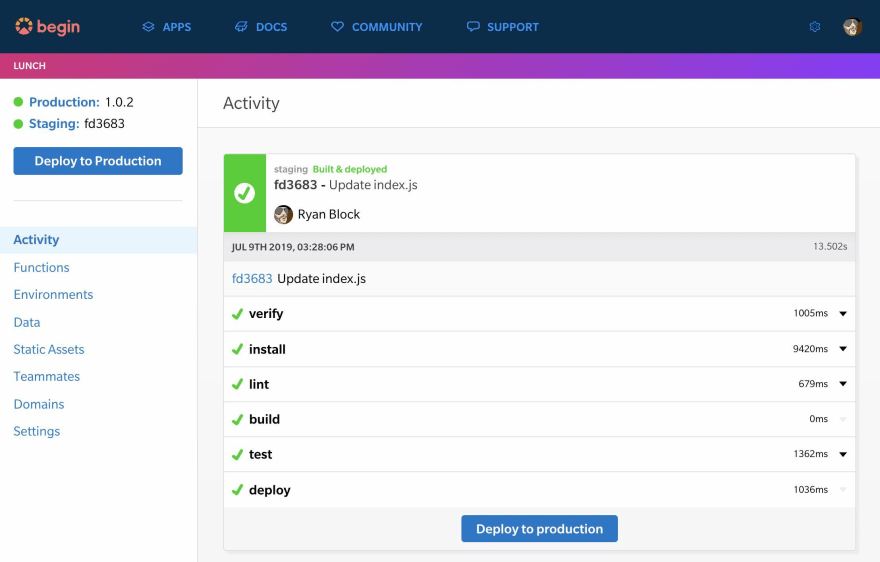 Go ahead and click the Staging link in the upper left corner of your left nav to open your new app's staging URL. You should now see your Vue app: 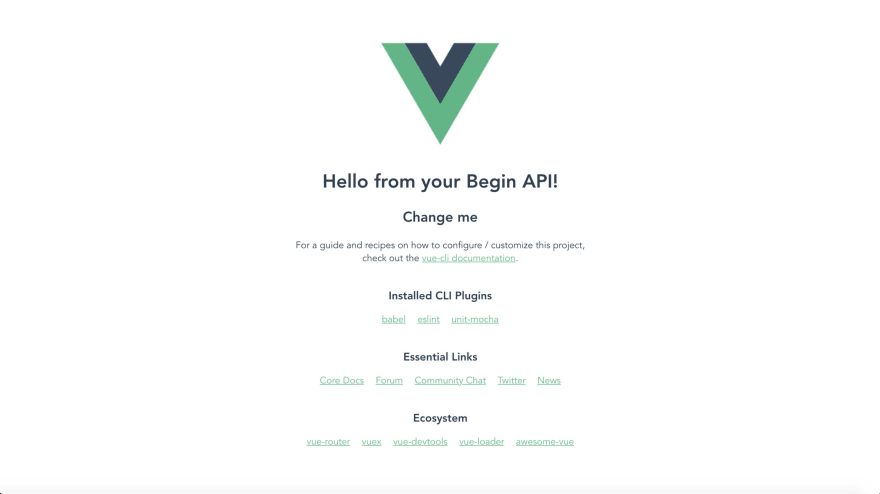 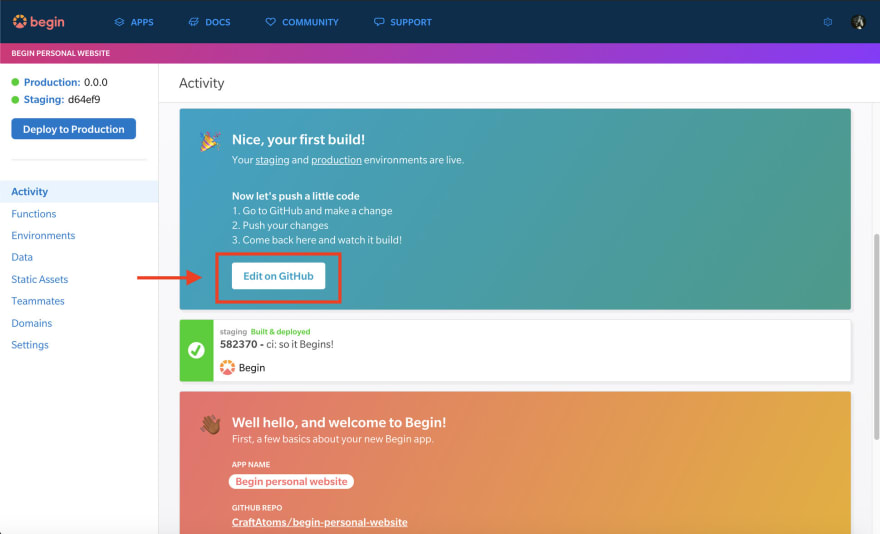 Vue CLI is a command-line interface that acts as standard tooling for Vue.js development. It's feature-rich with out-of-the-box support for Babel, Typescript, ESLint, Unit Testing & End-to-end Testing. You create, develop and manage your projects through an accompanying graphical user interface. It's really cool and you might want to set it up in your project for future use. We'll show you how to do that.

Since we've already created our project and have it set up locally on our machine, all we have to do is install the CLI globally and run the command to start the GUI(graphical user interface)

Once you start the GUI, you will see this screen load up in your browser on http://localhost:8000
Our project is already on our local machine so let's click the import button to sync our project and the GUI. 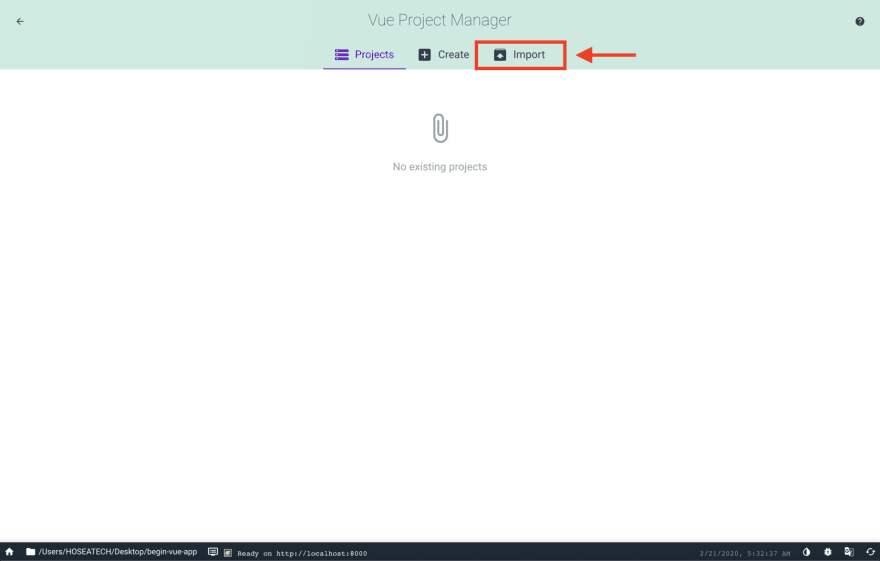 Look for your begin-vue-app project folder and click import this folder as shown in the screen below. 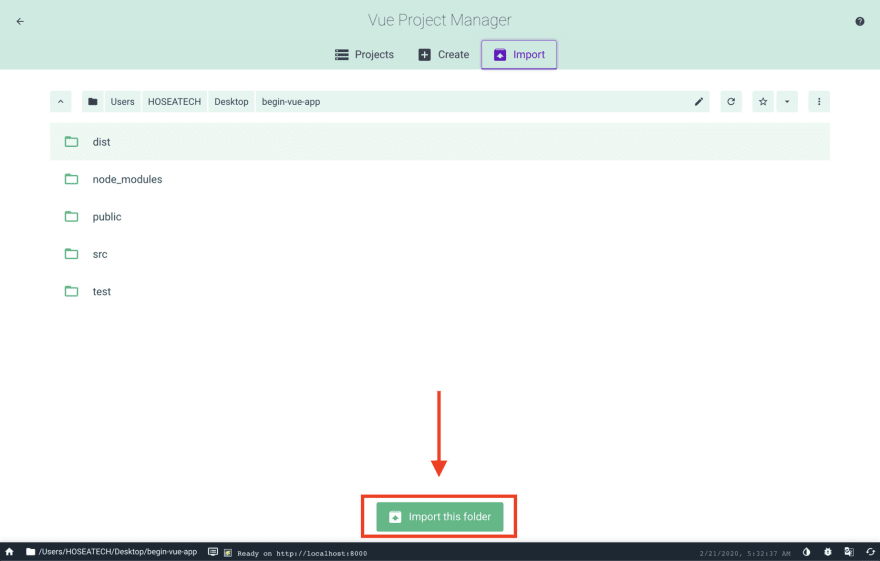 Now we're synced. Welcome to your new project! Vue CLI and the accompanying GUI tool give you tremendous insight and analytics into your Vue app. 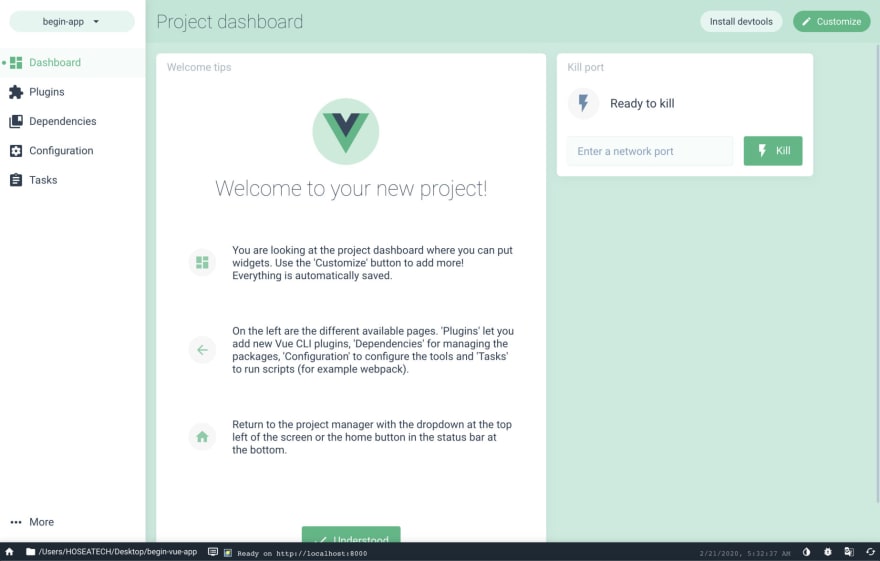 💡 Learn more! Be sure to head over to the Vue CLI docs to learn everything that you can do with these Vue development tools.

Now that your app is live on staging and running locally, let's take a quick look into how the project itself is structured so you'll know your way around. Here are the key folders and files in the source tree of your Vue app:

Let's go over each of these directories & files and learn how you may use them:

The file public/index.html is a template that will be processed with html-webpack-plugin. During build, asset links will be injected automatically.

All of our apps static assets(images) can be exported from this folder and imported into our components via relative paths.
When you reference a static asset using relative paths (must start with .) inside JavaScript, CSS or *.vue files, the asset will be included into your Webpack dependency graph.

You guessed it. This directory is where we keep our apps components.

Components are one of the most powerful features of Vue.js and can be reused as many times as you want. They help you extend basic HTML elements to encapsulate reusable code. At a high level, components are custom elements that Vue.js’ compiler would attach specified behavior to. Think of them as reusable Vue instances with a name!

The cloud function that handles example API requests is found at src/http/get-api/.

Some Begin apps are inert static web sites – but not this one. Your Vue app utilizes this built-in small, fast, individually executing cloud function that handles HTTP API requests and responses. (We call those HTTP functions, for short.)

The HTTP function that handles requests to GET /api is found in src/http/get-api/.

In the next section, we will go more in-depth about how to provision HTTP functions in your Vue app.

The script tag is for our JS and where we import in our HelloWorld component.

In our src folder you will find a main.js file which is the entry point into Vue. Here we import Vue and our main app component which is a file called ./App.vue.

We create a new Vue instance and we render the app component inside of an element with the id of app. This would be the div in public/index.html that has an id of 'app'.

Your Vue project comes built-in with a few boilerplate tests to ensure that things are running smoothly in your app. We've even loaded some example tests for web integration & Begin data in the /test/example/ directory.

With that said, Vue CLI has built-in options for unit testing with Jest or Mocha that works out of the box. There is also the official Vue Test Utils which provides more detailed guidance for custom setups.

Now for the fun part! Let's go over how HTTP functions work.

The text in the red box below is actually being fetched from an example API endpoint, handled by src/http/get-api/index.js. 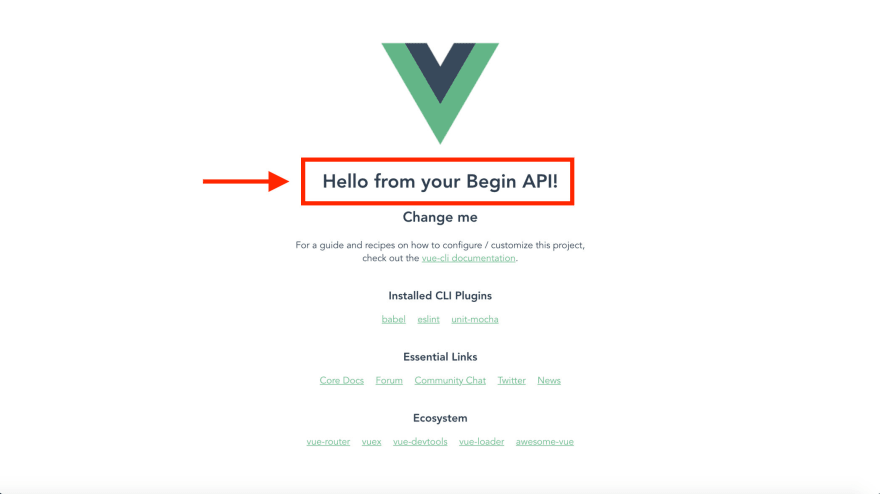 The output of this HTTP function can be called by fetching GET /api, and subsequently used by any component within your Vue app:

Now let's navigate to src/App.vue to see how this HTTP function is being implemented into your app. ./App.vue is our apps root component. Inside of the script tag you will find an import of our HelloWorld component. This component actually holds and displays the data from our Begin endpoint. As you can see below, GET /api/ is fetched via async function.

Then if we head over to our /components/HelloWorld.vue we'll find the h1 receiving the message prop being passed down from our apps root component ./App.vue

As you can probably see by now, being able to fetch and display data within your app serverlessly is an awesome way to extend the capabilities of your Vue app.

Head on back to Begin and open your staging URL once your build is complete. Looking good? Excellent.

When your next build is done, click the production link in the upper left corner to see the latest release of your app.