I applied to attend RubyConf 2017 as an Opportunity Scholar several months ago not really expecting to be selected. After all, the odds are typically against any one person receiving any highly sought after scholarship. In the end, I didn’t receive an initial spot and went on with my regular daily schedule. However, just a few weeks before the conference I received an email that made me almost leap out of my seat: A spot opened up… would I want it? How could I say no? After checking with my wife and our shared family Google calendar I accepted and started getting ready to head down to New Orleans.

As someone who graduated the Flatiron School only a couple months before, what would I find at this conference of hundreds of seasoned coding experts? Would I be welcomed? Would I feel completely over my head the whole time? I was incredibly fortunate that another graduate of the Flatiron School (regular dev.to contributor Yechiel Kalmenson), someone who I had become friends with, was also selected as an Opportunity Scholar, so I wouldn’t be going down completely alone, but we would be in a sea with hundreds of Ruby (DigitalOcean) sharks all around. 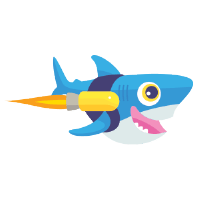 So was the experience as cutthroat as I feared? Absolutely not. The opening keynote was by none other than Yukihiro “Matz” Matsumoto, the creator of Ruby who emphasized the inclusive nature of the Ruby community. “Ruby is nice so we are nice,” or as it also goes, “Matz is nice so we are nice.” From the moment I arrived in the conference hotel I was not surrounded by a sea of sharks, but rather by a sea of t-shirt clad people sporting sticker bedecked laptops accompanied with welcoming smiles and an eagerness to get to know you. I quickly felt at home.

In fact, I realized I knew more than sometimes I give myself credit for. My education at the Flatiron School, my current part-time work as a technical coach at the school and my continued work on projects along with regular blogging and obsessively reading posts at places like The Practical Dev really does work to keep me current and informed. That is not to say I didn’t feel out of my depth at times — I did at times, but those were moments where I purposefully attended something that I knew would be a stretch and push the boundaries of my knowledge.
As part of the Opportunity Scholars program sponsored by the Google Cloud Platform (thanks Google!) I was assigned a “guide” for the conference. In my case I was actually assigned two guides, as there was a scheduling issue right before the conference with another scholar. While I spent more time with my original guide, both guides were eager to offer advice and a friendly face throughout the conference. It was also inspiring to me that my original guide was also a bootcamp graduate and she is now doing really great work at a company that hosts many bootcamp portfolio projects, along with enormous enterprise applications… I guess their primary business are those enterprise systems and not the small student capstone projects after all! We were also placed into smaller cohorts of guides and scholars and my cohort facilitator went out of his way to be incredibly welcoming and to get to know each person in his cohort. His exuberance (along with his height) made him easy to spot throughout the conference.

What were some of the major highlights for me? 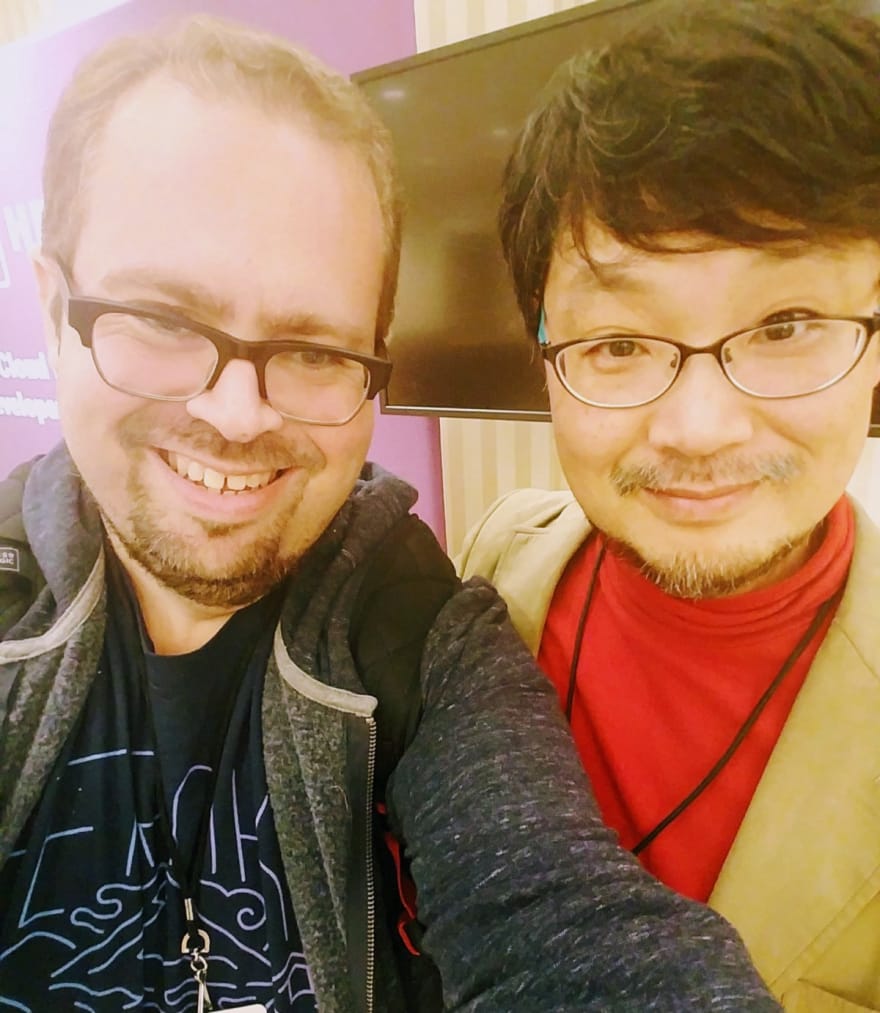 How could this not be the number one highlight? Matz ended up creating a programming language almost 25 years ago that proved to be elegant in its simplicity and incredibly robust in its applicability. Ruby has been the first language for so many bootcamp graduates as it brings us into the world of programming and that is not an accident. While at this point in my life I also spend a lot of time in Javascript, some time in PHP and a lot of time in the React framework, who doesn’t get a smile when they hear the words “Ruby on Rails?” I had a chance to go up to him, thank him for his immense contribution and, of course, grab a selfie. It is evident that he is much more expert at the art of selfie taking than I am since he knows to look at the camera unlike me!

When you learn to code, you quickly fall in love with it. If you don’t have a passion for it, it could be hard to sustain that devotion after the first night of debugging until the sun rises. Yet, the people in your life up until that point, might not be able to go along that journey fully with you. You start speaking a foreign language that uses a lot of English, but yet manages to be incomprehensible to your loved ones and current friends. They want to understand but have a hard time keeping up with all the git commits, iterators and data structures. You may think you’re being RESTful, but they just think you’re being odd. Thus, it is so nice to make new friends who share your passion. People you can talk about code with so you can focus on other topics with your older friends and your significant other.

This conference I made a lot of new friends, fellow Opportunity Scholars and seasoned programmers alike. We met in the hallway in between sessions, sat together during presentations, enjoyed Cafe Du Monde in the evening and sipped cocktails on Saturday night. A couple of these people I knew as screen names on Slack before, but most I did not know at all beforehand. I got to meet a “developer evangelist,” who quickly explained she wasn’t there to convert me and who even offered me a shoutout on Twitter after and people working on really interesting open source projects out in Ohio, fellow New Yorkers (lots of people from Brooklyn) and a couple from Colombia who just got back from spending a year traveling the world. I met a lot of bootcamp grads and current bootcamp students from all over, including Seattle, Denver, Austin and other places.

I am so excited to keep in touch with all these folks that I had the opportunity to meet and become friends with. The next RubyConf in 2018 is now not a theoretical idea, but a concrete opportunity to reconnect with real people, with an actual community of coders and Rubyists.

There was so much to learn at RubyConf! From the large keynotes that touched upon the intersections of programming, psychology and sociology to the sessions throughout each day that varied across topics from TDD, to open source, to machine learning, there were constant moments of one’s mind being expanded and pushed. 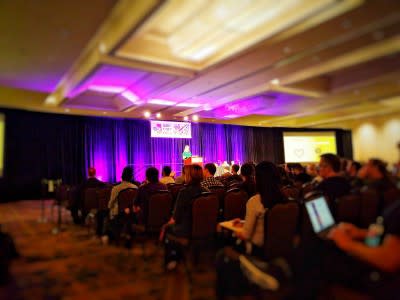 Every session I attended was thoughtful, engaging and well prepared. Among the many talks that stood out, I will remember for a while the ones on “Augmenting Human Decisions with Data Science,” “Git Driven Refactoring” and “Deterministic Solutions to Intermittent Failures”. I will be posting my notes and takeaways from these talks in a upcoming post. For now, just two words: rspec --bisect. If you already knew that command, give yourself a clap, but remember back to when you first learned it and what a paradigm shift that is in testing. Now you can relate to how I feel.

Seriously, I believe these conferences should be renamed to SockConf or ShirtConf. I wish someone had told me in advance that all you need is something for the first day, but otherwise your suitcase will be overflowing with a cornucopia of t-shirts and socks after visiting the sponsors at their booths. Also, stickers. So many stickers. I am not sure I have enough surface space in my whole apartment for all the stickers I collected in the past few days.

Overall, a huge thank you to my guides Stella Cotton, Caleb Thompson, to Allison McMillan for being instrumental in organizing the scholars program, to Jonan Scheffler for being an incredible cohort facilitator and to all my new friends for just being awesome (including Caroline, Joanna, CJ, Lauren, Chloe, Krista, John, Tim, Mihir and so many more).

Last, but certainly not least, was the city of New Orleans itself. It is a special place with a unique culture and people that seem to be in a constant state of happiness. I know that last part is most certainly not true, but coming from New York, I felt like everyone lived with a constant smile on their faces. While I did not get to see too much of New Orleans during the conference, I was grateful to enjoy a special Shabbat with the Jewish community of Metairie, LA after the conference. I also took moments during the conference to walk with people along the river or walk around the city and admire the architecture. During those walks I came across the New Orleans Holocaust Memorial and the Monument to the Immigrant, both situated prominently on the riverfront. 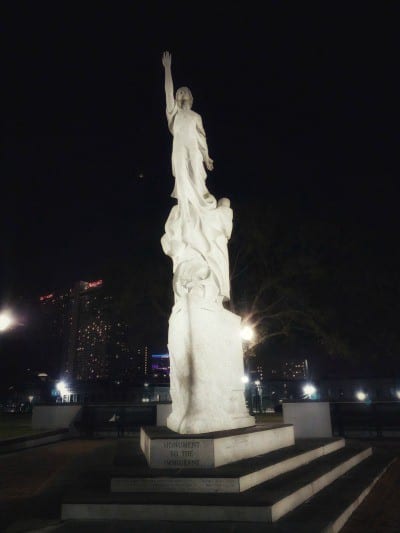 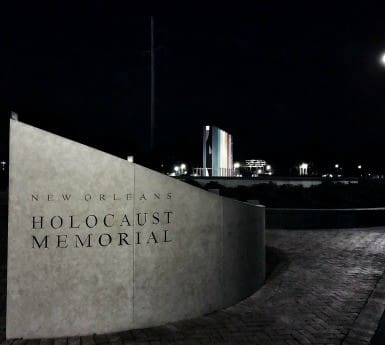 In short, this has been an incredible whirlwind week and I am grateful to the folks at RubyConf and Google Cloud Platform for making it possible!

What does "class << self" actually do in Ruby?