In your Angular application, you have the scenario of 2 Routes that load the same component ComponentA. ComponentA is configured to use ChangeDetectionStrategy.OnPush. It checks the route data, calls a REST API to retrieve data from the server, and then binds the data to a Grid or table.

When navigating to the other route, the old data sticks to the DOM during the time elapsed between clicking the route and receiving the new data from the server!

If you are facing such a scenario, then continue reading on to see how you can eliminate this behavior.

In addition, have a look at this article Angular 2 Component Reuse Strategy written by Julia Passynkova, where she explains in-depth how Angular reuses the same instance of the components to render them again in the DOM.

The scenario in depth

I've provided a sample Angular app to reflect the above scenario. You can access the application on StackBlitz.

When going through the code, you will notice that I've made use of a basic and container components by following the best practices in developing Angular apps. Sometimes they are also called dumb and smart components. If you are interested in reading more about how to organize your components in an Angular application, follow this link: Presentational and Container Components.

Run the application and click on Blogs. ComponentA loads, retrieves the data from the server, and then binds the data to the input parameters of ComponentB. Figure 2 illustrates this action.

I'm implementing a fake backend provider to simulate calling a REST API, hosted somewhere in the cloud, to retrieve some data. You may check the code for more details. 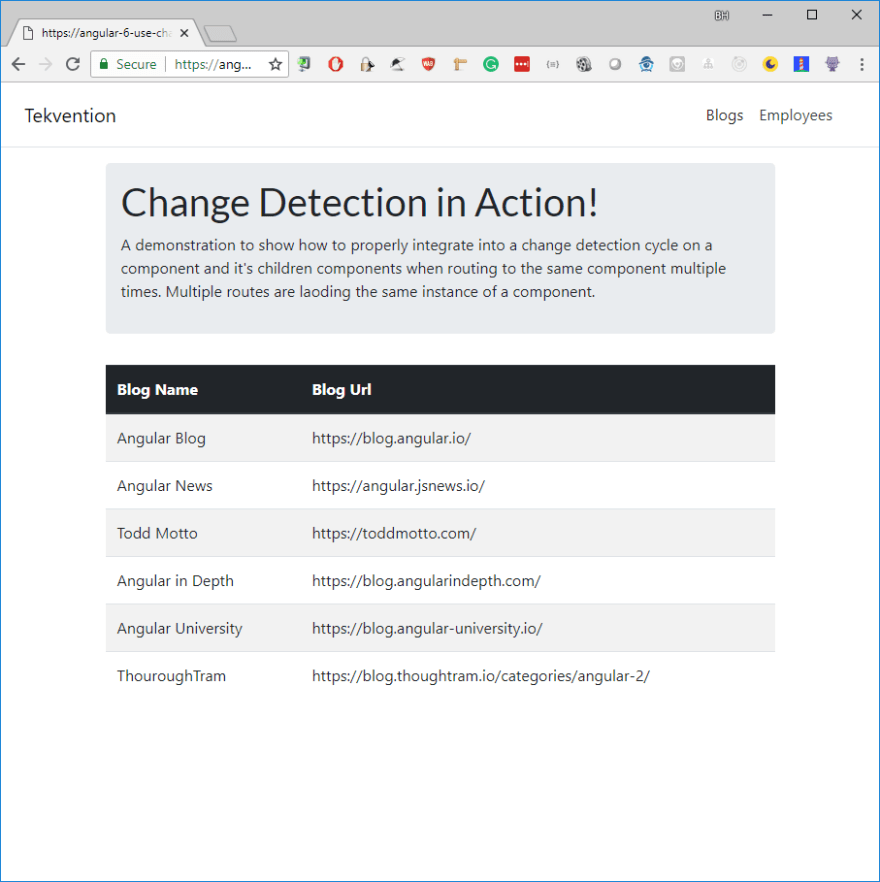 Now, click on Employees to load the employee's data.

By design, Angular reuses the same instances of ComponentA and its children components when routing to ComponentA multiple times. You clearly see how problematic behavior is popping up. Figures 3 and 4 illustrate that. 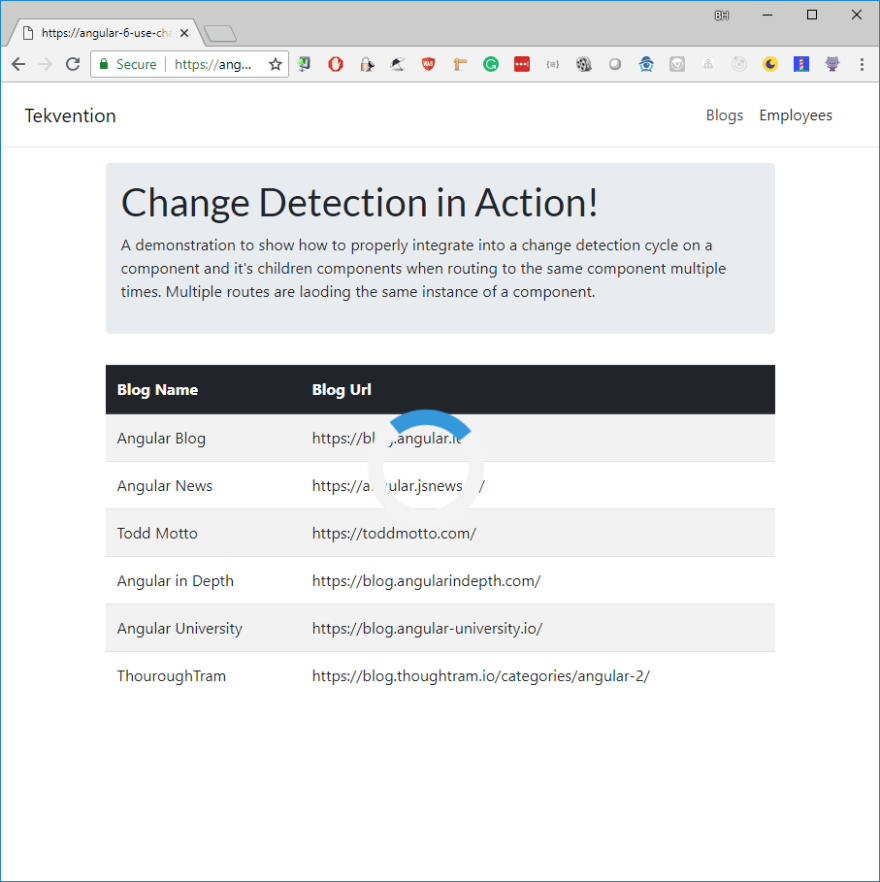 Even though you've clicked on a new Route, ComponentA is still showing the old data! 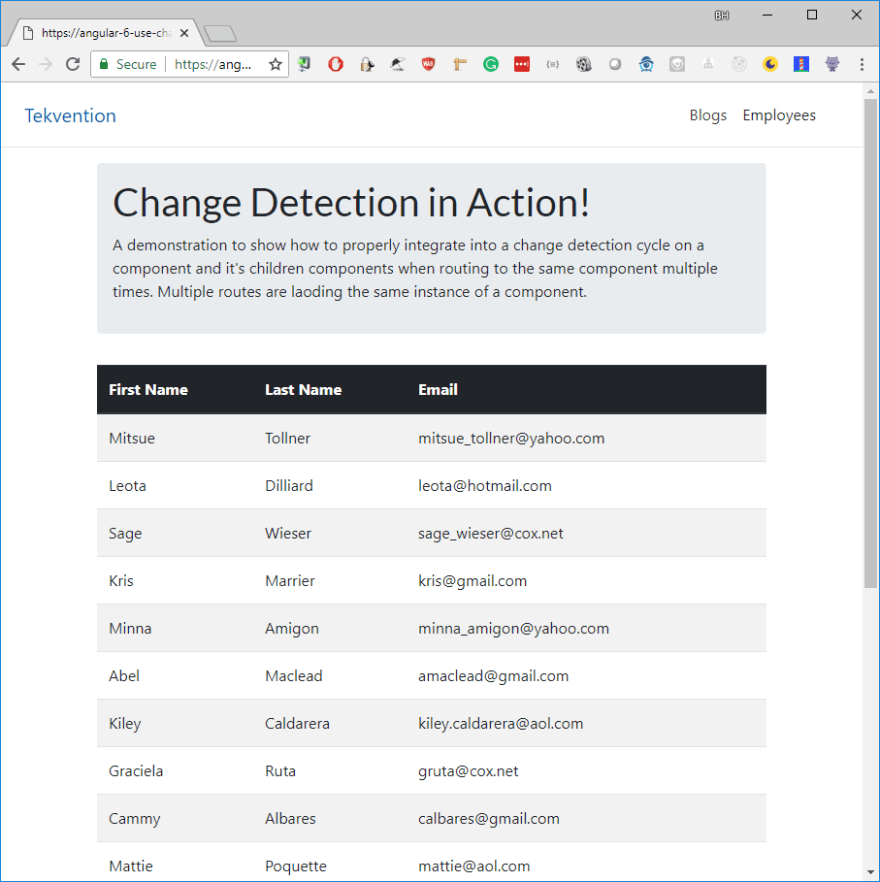 Upon receiving the new data from the server, ComponentA reflects them on ComponentB and hence on DOM.

The core problem we are facing here is the fact that the ComponentA keeps on holding the old data when a new Route, pointing also to ComponentA is clicked. Only when the new data arrives from the server, ComponentA will reset the DOM and displays the new one!

Let's have a thorough analysis of this problem from an Angular point of view.

Analysis of the problem

The behavior we are witnessing here doesn't necessarily mean that Angular is malfunctioning. On the contrary, Angular is doing its job perfectly. We need to adapt our code to fit the way Angular deals with change detection cycles internally.

When Angular runs a change detection cycle on ComponentA, it will start first by locating its children components. In this case, there is only a single child component, ComponentB.

Angular continues on with the change detection cycle and makes a check to see if there is any change in the values of the input parameters on ComponentB. If a change is detected, it will trigger ngOnChanges() function on ComponentB.

Finally, Angular renders the DOM of ComponentB with the new input parameter values, if there was a change, otherwise, it will render the old data.

We can easily relate the above to the problematic behavior in hand. What is really happening in our case can be summarized as follows:

Once subscribed to the Router events collection, the code acts only when the event is of type NavigationStart. It simply clears the local variables in ComponentA that are bound to the input parameters of ComponentB.

By the time the change detection cycle starts, Angular detects a change in the input parameters of ComponentB and hence it removes the old data from DOM and shows blank instead.

When the new data arrives, Angular triggers another change detection cycle updates the input parameters of ComponentB with the new data received, and finally renders them to the DOM. 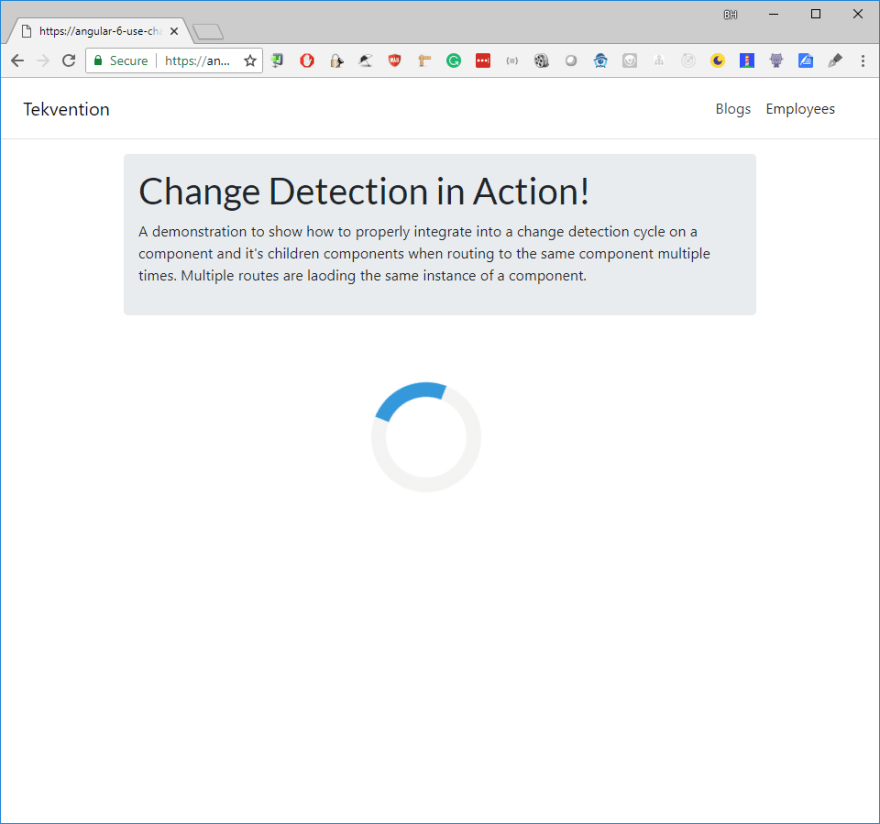 Learning how a change detection cycle works in Angular, helps you find solutions to many problems that you face in your daily work. In this article, we've made use of the Router events available, to reset local variables, inside a Component, that are bound to input parameters on a child Component. This is so that the change detection would notice a change, reflects that on the DOM when a new Route is clicked, and eventually re-load the same Component at hand.

Day 3: CI for farmworld, a Python package - a failed attempt

This is the article published via easy blog !! -02

Once suspended, bhaidar will not be able to comment or publish posts until their suspension is removed.

Once unsuspended, bhaidar will be able to comment and publish posts again.

Once unpublished, all posts by bhaidar will become hidden and only accessible to themselves.

If bhaidar is not suspended, they can still re-publish their posts from their dashboard.

Once unpublished, this post will become invisible to the public and only accessible to Bilal Haidar.

Thanks for keeping DEV Community 👩‍💻👨‍💻 safe. Here is what you can do to flag bhaidar:

Unflagging bhaidar will restore default visibility to their posts.