Caching, is a concept that was gifted to software world from the hardware world. A cache is a temporary storage area that stores the used items for easy access. To put it in layman’s terms, it is the chair we all have. 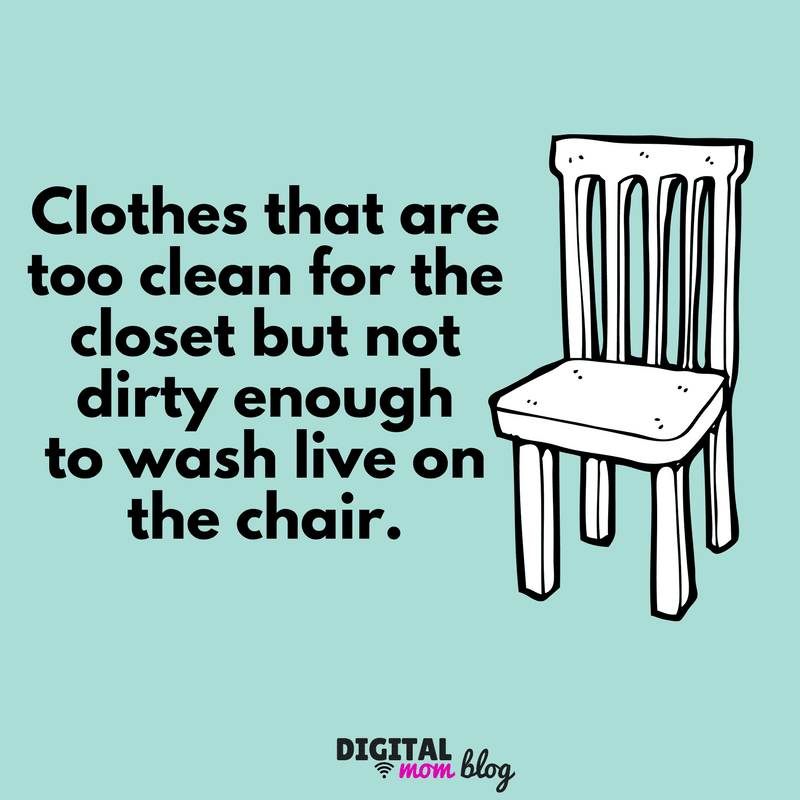 This blog covers the basics of

In the world of computer science, Caches are the hardware components that store the result of computation for easy and fast access. The major factor that contributes to the speed is its memory size and its location. The memory size of the cache is way less than an RAM. This reduces the number of scans to retrieve data. Caches are located closer to the consumer (CPU) hence the less latency.

There are two broad types of caches operation. Cache such as Browser caches, server caches, Proxy Caches, Hardware caches works under the principle of read and write caches.

When dealing with caches we always have a huge chunk of memory which is time consuming to read and write to, DB, hard disk, etc., Cache is a piece of software/hardware sitting on top of it making the job faster.

A read cache is a storage that stores the accessed items. Every time the client requests data from storage, the request hits the cache associated with the storage.

Write caches as the name suggests enables fast writes. Imagine a write-heavy system and we all know that writing to a DB is costly. Caches come handy and handle the DB write load which is later updated to the DB in batches. It is important to notice that, the data between the DB and the cache should always be synchronized. There are 3 ways one can implement a write cache. 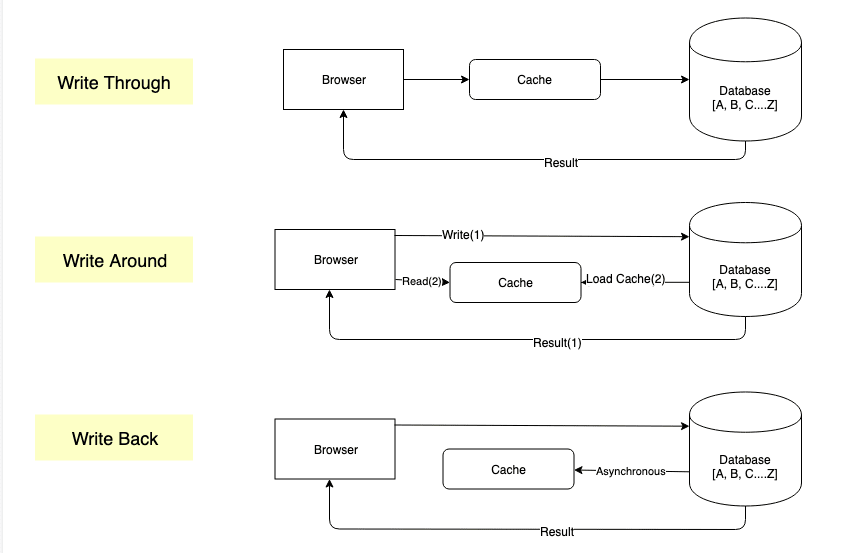 The write to the DB happens through the cache. Every time a new data is written in the cache it gets updated in the DB.

Write back is when the cache asynchronously updates the values to the DB at set intervals.

This method swaps the advantage and disadvantage of Write through. Though writing to a cache is faster of Data loss and inconsistency

Write the data directly to the storage and load the cache only when the data is read.

Caches make the reads and write fast. Then it would only make sense to read and write all data to and from caches instead of using DBs. But, remember the speed comes only because caches are small. Larger the cache, longer it will take to search through it.

So it is important that we optimize with space. Once a cache is full, We can make space for new data only by removing the ones are already in the cache. Again, it cannot be a guessing game, we need to maximize the utilization to optimize the output.

As the name suggest when a cache runs out of space remove the least recently used element. It is simple and easy to implement and sounds fair but for caching frequency of usage has more weight than when it was last accessed which brings us to the next algorithm.

LFU takes both the age and frequency of data into account. But the problem here is frequently used data stagnates in the cache for a long time

Why on earth will someone use an MRU algorithm after talking about the frequency of usage? Won’t we always re-read the data we just read? Not necessarily. Imaging the image gallery app, the images of an album gets cached and loaded when you swipe right. What about going back to the previous photo? Yes, the probability of that happening is less.

FIFO - First In First Out

When caches start working like queues, you will have an FIFO cache. This fits well for cases involving pipelines of data sequentially read and processed.

Caches are basically a hash table. Every data that goes inside it is hashed and stored making it accessible at O(1).

Now how do we kick out the least recently used item, we by far only have a hash function and it’s data. We need to store the order of access in some fashion.

One thing we can do is have an array where we enter the element as and when it is accessed. But calculating frequency in this approach becomes an overkill. We can’t go for another Hash table it is not an access problem.

A doubly linked list might fit the purpose. Add an item to the linked list every time it is accessed and maintain it’s a reference in a hash table enabling us to access it at O(1). 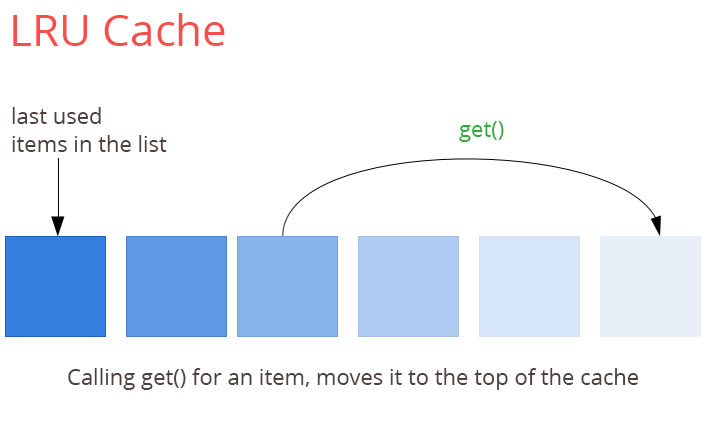 When the element is already present, remove it from its current position and add it to the end of the linked list.

Where to Place the Caches?

The closer the caches are to its consumer faster it is. Which might implicitly mean to place caches along with the webserver in case of a web application. But there are a couple of problems 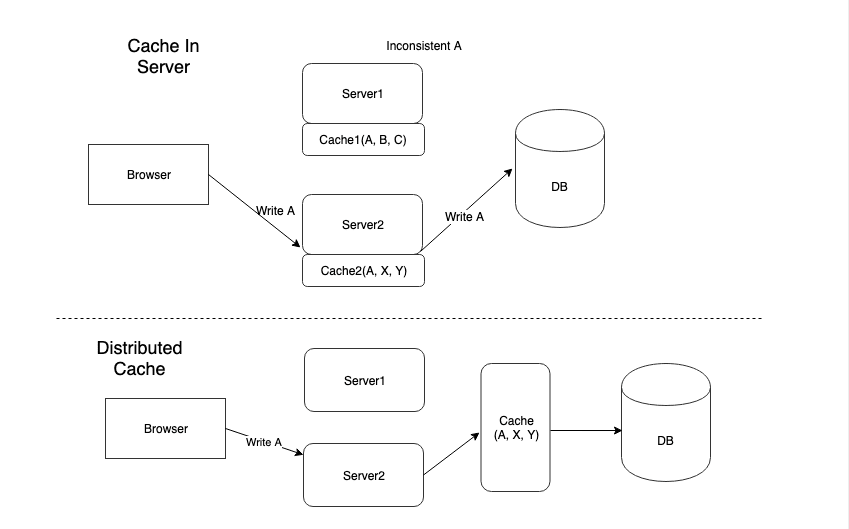 The most viable solution is to maintain a cache outside the server. Though it incorporates additional latency, it is worth for the reliability of caches.

Distributed Caching is the concept of hosting a cache outside the server and scaling it independently.

When to Implement Caches?

Finding the technologies to implement caches is the easiest of all steps. Caches promises high speed APIs and it might feel stupid not to incorporate them, but if you do it for wrong reasons, it just adds additional overhead to the system. So before implementing caches make sure

To understand caching we need to understand the data we are dealing with. For this example I am using a simple MongoDB Schema of User and Event collections.

We will have APIs to get User and Event by their associated IDs. The following code snippet comprise a helper function to get a respective document from MongoDB

LRU-Caching like you see in the following example is easy to implement since it has out of the box Python support. But there are some disadvantages

To support other caches like redis or memcache, Flask-Cache provides out of the box support.

With that, We have covered what caches are, when to use one and how to implement it in Python Flask.

How to setup a Svelte + TailwindCSS +DaisyUI development environment?

Everything you need to know about Generators in JavaScript 🚀

What is the DOCTYPE Declaration in HTML?