For example- Consider the following time complexities of two algorithms.

Today we will be discussing more about Space Complexity. Space complexity is amount of memory of a system required to execute a program to produce some legitimate output. Similar to Time Complexity, Space Complexity is often expressed asymptotically in Big O Notation such as O(1), O(log n), O(n), O(n log n), O(n^2), O(n^3), O(n^y), O(2^n), O(n!) where n is a characteristic of the input influencing space complexity and O is the worst case scenario growth rate function.

Why it's important to know the space complexity? Answer to this is, the computational device has limited memory and our overall cost increases with the increase in storage. So it's very important to know beforehand the amount of space required for the size of input data set.
For any algorithm, memory is used for the following purpose:

Mathematically if we put in equation, space complexity can be defined as,

When a program is under execution, it uses computational device memory for three main reasons:

When we want to perform analysis of an algorithm based on its Space complexity, we usually consider only Data Space and ignore Instruction Space as well as Environmental Stack.That means we calculate only the memory required to store Variables, Constants, Structures, etc.

Cheat sheet, to keep it handy.
Below is the list of some common Space Complexity terms, which we knowingly or unknowingly use in our day to day coding. It is arranged in order of there execution time when their input size increases.

For better understanding See the below graph, it's combination of all the graphs for different Space Complexities, You can clearly see with the increase in input data set how space complexity varies. Based on the amount of input data set choose your algorithm wisely. 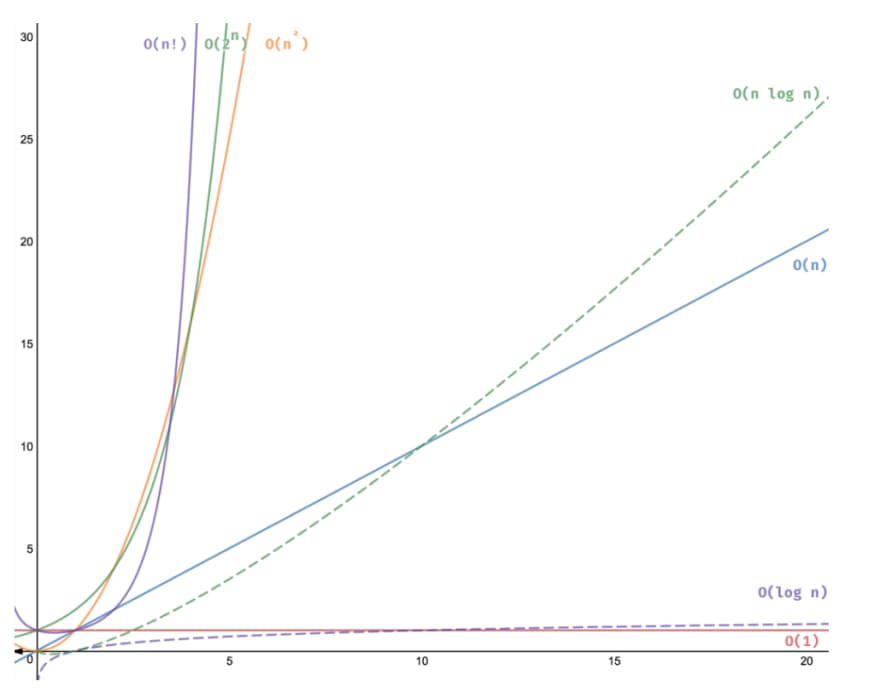 However you are always free to choose some sample unit (like T size) for same type of variables to calculate the size.
Now lets take some example and decode how to calculate space time complexity:

In the above expression, variables a, b, c and z are all integer types, hence they will take up 4 bytes each, so total memory requirement will be (4(4) + 4) = 20 bytes, this additional 4 bytes is for return value. And because this space requirement is fixed for the above example, hence it is called Constant Space Complexity.
If any algorithm requires a fixed amount of space for all input values then that space complexity is said to be Constant Space Complexity or O(1) space complexity.

Example 2- It's bit complex than first one,

Example 3- When you implement binary search, You will find total memory requirement will be something similar in terms of log(n). Hence it is called as Logarithmic Space Complexity or O(log n) Space Complexity.
In practical on day to day basis,
LOGSPACE is the set of problems that can be solved by a deterministic Turing machine using only O(log n) memory space with regards to input size. Even a single counter that can index the entire n-bit input requires log n space, so LOGSPACE algorithms can maintain only a constant number of counters or other variables of similar bit complexity.

here, the memory requirement will be some constant *( n * log (n)). Hence it is called Linearithmic Space complexity or O(n log n).

Similarly, we can have quadratic and other complex space complexity as well, as the complexity of an algorithm increases.

But we should always focus on writing algorithm code in such a way that we keep the space complexity minimum.

To conclude, i would say, better the space complexity of an algorithm better will be performance of it. Before finalizing the algorithm for your programming code the worst case scenario should be considered. It would help in longer terms with respect to scalability and sustainability of the overall system and it will help in keeping the resources in healthy condition without burning out.

If you have some algorithm and want to calculate the space complexity, put the code in the comment section and we can decode together.

Babloo Kumar
I love to program and have done so for 17410+ hours over the past 7+ years. Data structures, Algorithms, JavaScript, Angular, React & Cloud excites me.
Time Complexity
#datastructures #timecomplexity #algorithms #performance