TL;DR: Python asyncio is about 3.5 times faster than threading. Golang is very performant and has better scalability. It is curious to see why.

In recent years we have seen the rise of async programming in mainstream programming languages. Constructs like promises, async/await, and coroutines can now be found in Javascript, Python and even good old C++. As we all know, this is a side effect of another trend -- more and more applications now rely on network IO, and IO takes time. Instead of wasting your precious CPU cycles waiting for the servers to get back to you, it is wiser to continue other essential tasks, like UI rendering, and resume what you were doing when the data is available.

As a long time user, the first language that comes to my mind is Python. Traditionally, Python has limited concurrency support. It has a threading library, but in Python, there should be only one thread running at each given time because of the Global Interpreter Lock (GIL), thus limiting the usefulness of threads 1. Python also has a multiprocessing module in the standard library. However, its drawback is that it forces the programmers to deal with Inter-Process Communication (IPC) — the default choice is too restricting (pickles).

Even if Python had good support of threading and (sub)processes, I am not too keen to use them because they are often too low-level to be helpful. You need to handle communication and synchronisation. Threads/processes are system-level resources, so proper clean up is always required, adding unnecessary complexity to application code. Plus, compared to other concurrency models like coroutines, threads and processes are always more expensive -- they consume more memory and are slower to start.

Fortunately, from Python 3.6 on, we have the new asyncio standard library baked into the language 2.

Let's demonstrate the benefits of async programming by walking through an example: I want to get a list of Pokemon's names through the Pokemon API. Here is how I would do it in traditional Python:

The above code is easy to understand; the only thing to notice here is that http.get is synchronous. Python interpreter will block further execution if the HTTP client has not got a response. Time, your precious time, is wasted!

Below code achieves the same effect, but using asyncio:

Admittedly, the code becomes slightly more complex. But we programmers know we must pay a little bit price for concurrency, right? Compared to the threading version3, which is the "old" way of achieving concurrency, the asyncio code is very readable -- it hides details an application developer does not care about.

So how does asyncio perform? 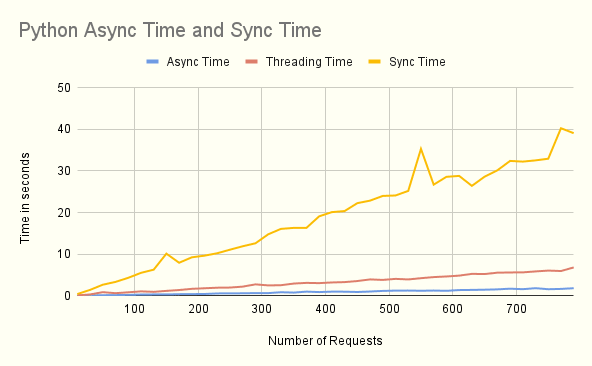 It is no doubt that the sync and wait version is slow, but what this graph does not tell you is that the threading pool version is much slower than the async one; let's zoom in a little bit: 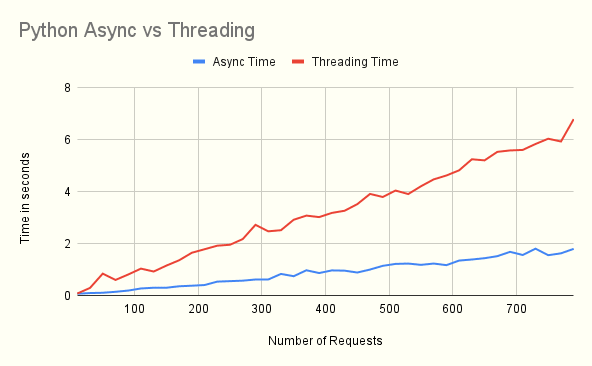 And plotting for only asyncio: 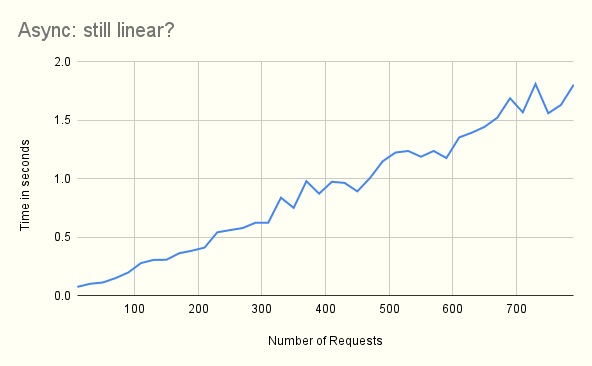 In general, even when using multi-threading in Python, getting all the responses we need is slower by 3.5 times than using asyncio. This might be unintuitive, as asyncio uses only one thread. But as mentioned previously, the GIL is playing a role here, so there is no concurrency, although we have multiple threads. In contrast, in asyncio, the concurrency is achieved through OS-provided IO multiplexing -- a single thread can wait on multiple IO events simultaneously using the epoll system call and schedule its work using an event loop.

But I am not satisfied. Although asyncio is faster, if we look at the blue line, the total time to get all the response has a linear relationship with the number of requests we sent. My theory was that when using asyncio, since the GIL does not bound us, we simultaneously established many TCP connections to the server. Assuming the server itself is concurrent, we should get all the responses back at an almost identical time. Thus the blue line's slope should not be that obvious.

Like sprinters racing to cross the finish line, our HTTP responses should arrive at almost the same time.

Somehow this is not the case. I have several theories, but none of them can fully explain this issue at this moment.

But what about other languages? Do their implementation of asyncio suffer the same issue? 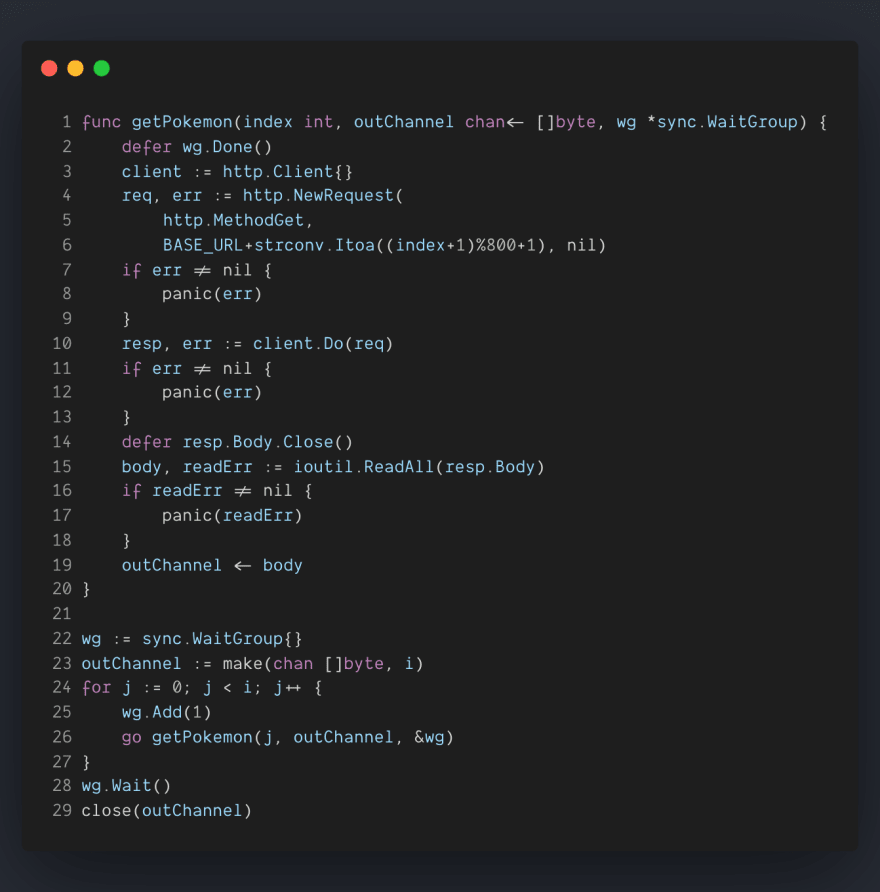 Note that in Golang, we do not have the concept of a coroutine; goroutine is a special primitive that can only be found in Golang. The code here may give you the impression that function getPokemon seems to be running in a thread, but there are two essential things to remember:

Let's look at the performance: 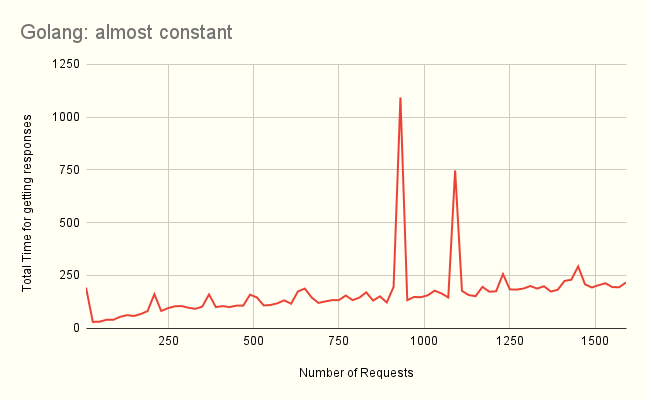 Ignoring the apparent outliers, we can see that the line is almost flat. This is what I have expected, and it shows that Golang's implementation has better scalability than Python when using async IO.

Also, to note: the y-axis's unit for Golang is milliseconds, not seconds, and the x-axis's maximum value is almost 1600, twice as many as Python's. Compared to Python, Golang is much faster.

Given that we know that Golang and Python are all using epoll internally for IO multiplexing, and we understand from libevent's benchmark below that epoll has an almost O(1) scalability. Python's linear scalability seems rather strange and suggests that asyncio has some optimisation awaiting. 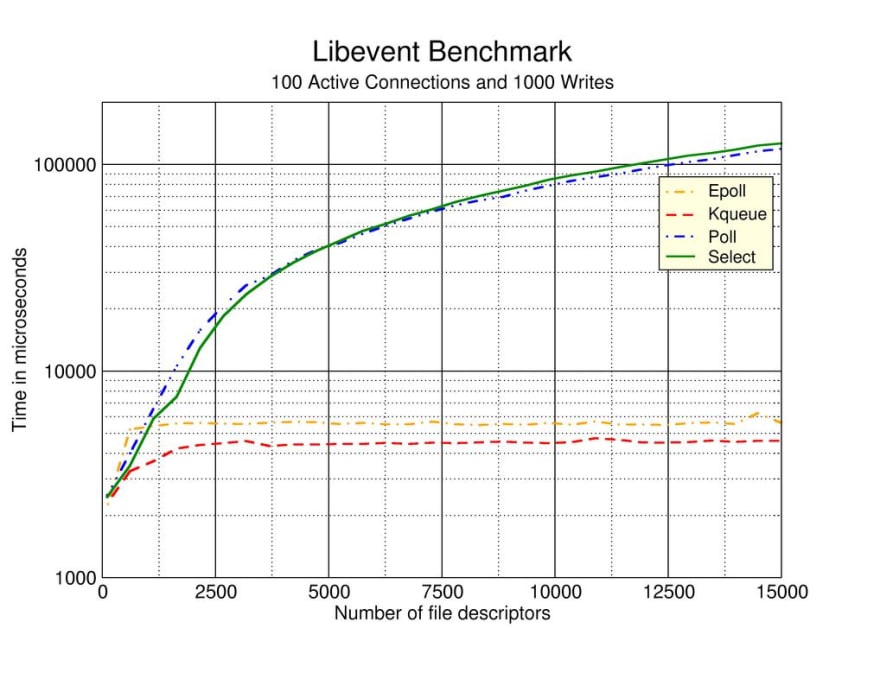 Special thanks for Pokemon API. I have spaced out my experiments, so it should be well in the range of their fair use policy's tolerance.

Mastering Factory Design Patterns through the Construction of a Banking System

Once suspended, bobfang1992_0529 will not be able to comment or publish posts until their suspension is removed.

Once unsuspended, bobfang1992_0529 will be able to comment and publish posts again.

Once unpublished, all posts by bobfang1992_0529 will become hidden and only accessible to themselves.

If bobfang1992_0529 is not suspended, they can still re-publish their posts from their dashboard.

Once unpublished, this post will become invisible to the public and only accessible to Bob Fang.

Unflagging bobfang1992_0529 will restore default visibility to their posts.