I wrote the NES emulator with Rust and WebAssembly to learn Rust. It’s not perfect and have some audio bugs, but it’s good enough to play Super Mario bros.

Here is the source code. Also, you can play the game in the canvas below

The Nintendo Entertainment System (NES) was the world’s most widely used video games.

I had to emulate the above specs with WebAssembly and browser features. 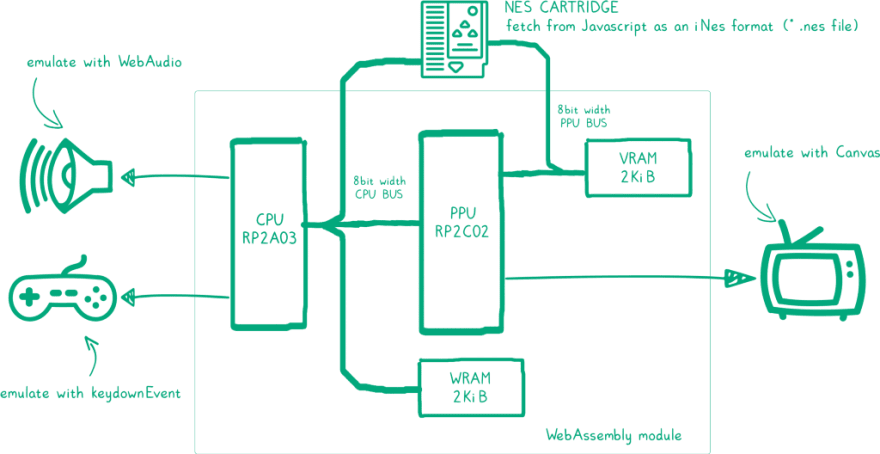 The most important of these are NO_EXIT_RUNTIME and EXPORTED_FUNCTIONS. NO_EXIT_RUNTIME is used to freeze the memory on the Rust side to use it from the JavaScript side. Without this setting, memory will be freed and unexpected behavior will occur.

EXPORTED_FUNCTIONS is used to specify the function to export to the Javascript side. Actually it is invoked from JavaScript side as follows.

I wanted to use closure so I struggled and finally wrote it as follows.

This is expressed as follows.

How to emulate CPU

The 6502 does not have a pipeline structure like a recent CPU, and can be emulated simply by repeating fetching, decoding, and execution from Program ROM.

In addition, the opcode dictionary is created using lazy_static. That is a very good library.

The PPU reads the sprite information from the cartridge and constructs the screen. So the data bus of the PPU is directly connected to the cartridge.

Sprites are 8 x 8 or 8 x16 pixels as follows, PPU places sprites based on data set in VRAM. (Below is the output of Super Mario Bros. sprite data).

Please refer to the following article for details about the NES graphic.

After generating data for one screen from VRAM data and sprite information, I emulated game screen by drawing on Canvas.

canvas_render is Javascript side code. If you are using emscriptenyou will be able to call on the Rust side via mergeInto.

The game pad emulated using keydownEvent. Specifically, the following handlers are registered at initialization, and specific bytes of ArrayBuffer are written at keyDown / keyUp. This is because, from the viewpoint of Browser, the memory on the Rust side can be handled as ArrayBuffer.

Just like Canvas, we used mergeInto to invoke Javascript code using WebAudio API from Rust side.

As an example, the waveform is generated using the WebAudio API as follows

Although we omitted it considerably, we implemented NES Emulator with Rust and WebAssembly like this. The whole code please see the following repositry.

If you want to know deeply, you may want to look at the following.

Dev.to is the perfect demonstration of how content-based web apps should be developed