The ArcGIS Runtime SDK for .NET has a robust set of capabilities, including the ability to query, select, and filter features from a map using C#. This tutorial will teach you how to use a SQL query to filter the data displayed by your GIS mapping solution.

In this section, you will learn how to select and highlight a sub-set of a feature service’s data. The tutorial will build off the WPF application you created in the previous tutorial.

In the MapViewModel.cs, the class initializer method will simply call a single method, InitializeMap().

The InitializeMap() method will populate the map and set the initial viewpoint. Start with the same code you used in the previous tutorial.

The above code will load the entire data set and display all of its features on the map. Suppose you want to select those features which are subway routes operated by the Metropolitan Atlanta Rapid Transit Authority (MARTA). Recall that the application’s MapView is bound to the Map property of the MapViewModel. It is when the Map property is updated that the program’s UI is refreshed and the map is populated. When you perform a query on feature layer that has been added to the map, the Map property gets updated.

To query against the feature table, you will define the SQL query as part of a QueryParameters object.

Next, execute the query and await the results. Save the list of features that match the query as a FeatureQueryResult type. 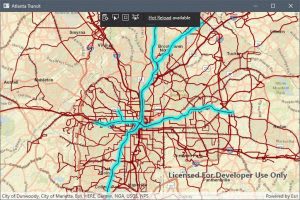 Filtering and Displaying Subset of Data

Suppose you want to display only those features that match a given query. In this case, you should load the feature service as a Feature Table. This will allow you to edit the table, keeping only those results that are of interest. Finally, you will load the modified table as a feature layer and add it to your map.

For this example, create a private field to hold the values of the feature table and feature layer. This will make it easier to pass them to various methods in your C# class.

Next, construct the InitializeMap() method. It will look similar to the previous example, except you will load the feature service as the private ServiceFeatureTable you created earlier, instead of loading it directly as a FeatureLayer.

Line 22 creates a map with a given basemap, and it sets the initial viewpoint to the Atlanta region. Next, you loaded the Atlanta transit routes feature service as a feature table and set the ServiceFeatureTable.FeatureRequestMode property to ManualCache. This ensures that the map will not automatically be populated by features from the service. Instead, the map will only be populated manually by calling the PopulateFromServiceAsync() method.

One Line 29, you have referenced a method, OnTableLoaded(), that will be called in response to the Loaded event of the ServiceFeatureTable being raised. For a primer, see the tutorial on event-driven programming.

The OnTableLoaded() method will be your filter method. This method should query the table and update it to show only results that match the query terms.

Similar to the example above, you have started by defining SQL query parameters to search for subways operated by MARTA. The outputFields variable is used when populating from the service to define which fields are loaded. In this example, all fields will be loaded. This is useful for displaying a callout or popup to show data to the user, such as the subway route number, etc. You could also limit the fields that are returned to only those your application will use.

Finally, Lines 46-53 include a try-catch block that executes a call to the PopulateFromServiceAsync() method based on the query parameters and the fields you wish to return. The try-catch provides basic error handling in case the sql string is improperly formatted, for example.

The second argument of the PopulateFromServiceAsync() is a bool parameter which indicates whether the cache should be cleared before the table is populated. When this value is set to true , as in this example, the table will be cleared and replaced with the query results. If it were set to false , the results would be appended to the table. 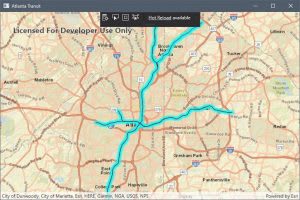 In this tutorial, you learned a technique for querying and selecting features from an ArcGIS feature service. You also learned how to filter a feature table to show a map that contains only the results that match a specific query string. These techniques form the building blocks to more advanced GIS applications. If you have any questions, feel free to ask in the comments!

Adding Startup.cs back to .NET 6 Project

Dependency Injection pattern and Inversion of Control with C#

Once suspended, bradwellsb will not be able to comment or publish posts until their suspension is removed.

Once unsuspended, bradwellsb will be able to comment and publish posts again.

Once unpublished, all posts by bradwellsb will become hidden and only accessible to themselves.

If bradwellsb is not suspended, they can still re-publish their posts from their dashboard.

Once unpublished, this post will become invisible to the public and only accessible to Bradley Wells.

Thanks for keeping DEV Community safe. Here is what you can do to flag bradwellsb:

Unflagging bradwellsb will restore default visibility to their posts.