Do you let the code speak for itself? Or do you comment until the cows come home?

At Mobile Jazz we develop mobile apps and websites for our customers. Weâ€™re committed to delivering high quality software, and for us that means paying attention right down to the smallest detail.

A timeless hot topic among developers is commenting on the code. Even within our team we hold animated internal discussions on this: Some people rarely comment on their code, while others like to throw in a bucketload.

One of the main purposes of adding comments is to aid future work. In our case this is particularly crucial, as it enables us to work on different projects at the same time or work on a project every X months only.

Letâ€™s look at a real example from some code we inherited from one of our developers. We came across a problem that should have been a breeze to solve. But, because of a poorly constructed comment, it quickly turned into a real headache.

As you can see, the comment makes it clear that thereâ€™s a custom library jar, but this doesnâ€™t really help us. Hereâ€™s why:

As you can see, comments are important. Usually developers don't pay too much attention to the comments because, to them, what theyâ€™re working on is obvious.

Imagine, however, that this particular developer leaves the company. So, too, do the rest of the team over a 2-year period. Now thereâ€™s no-one in the company that understands the comment, and when a new developer needs to delve back into the codeâ€”whoops, thereâ€™s no way of knowing whatâ€™s going on. This is exactly what happened in this example.

Also, you should always document any change you make to an existing library and keep the code of the modified version. Then, you can add a link to the code and the document of changes, via the comment itself. If you are using a public library available in GitHub, itâ€™s a good idea to create a branch of the original library and keep the modified version in your GitHub account.

Do too many cooks spoil the broth? Absolutely not.

Itâ€™s always better to have too many comments than none at all. In my case, for example, I work on a lot of different projects and languages at the same time, so for me having comments on the code helps massively when it comes to quickly understanding what's going on.

Letâ€™s take a look at another example, this time of code with quality comments.

The following screenshot contains some GO code from Bugfender. Even if you don't understand GO and don't know anything about Bugfender you can easily follow what's happening the code: 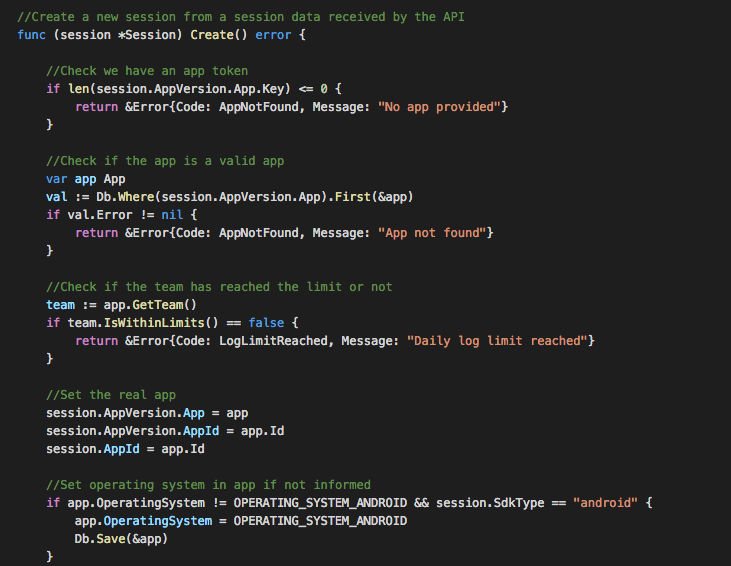 Yes, most of the comments might look redundant as the code is quite clean and clear, but having the comments in plain text allows anyone to understand what the function is doing in just a couple of seconds. Thereâ€™s no need to understand GO or the models in the product. It makes it so much easier if you then want to delve deeper into a particular area of the code.

Now, take a look at the following screenshot of some previous code we inherited from a client: 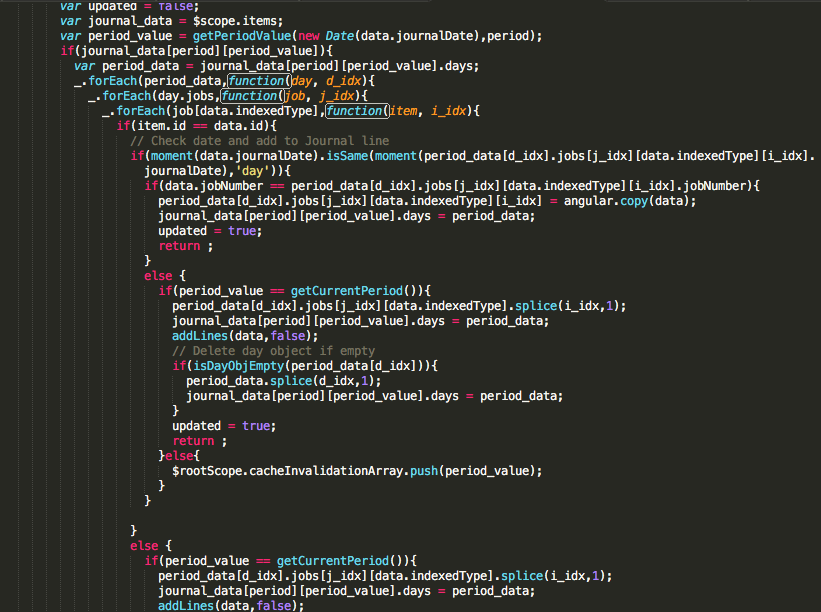 Yes, there are some comments in the code, but itâ€™s really hard to understand what the code is doing even with the comments as they donâ€™t provide enough information.

The more complex the code, the more comments it should have.

At Bugfender and Mobile Jazz, we take code quality very seriously. We always ensure our projects are written with clean, clear code that can be easily understood and transferred to our clients.

Here's our blueprint for writing comments:

Do you have any commenting rules in your company? Share them with us!

How do you write technical documentation?

The zen of focus

Easy CRUD setup with Meteor in only 4 steps from scratch

Bugfender
Get fast remote access to your applications’ log files on users’ devices - wherever they are in the world. Bugfender logs virtually everything, and goes beyond simple app crashes. It even logs...
Hard things in Computer Science
#computerscience #discuss #hardthings
Nobody talks about this in the IT world
#beginners #productivity #programming #discuss
How long is too long to stay at a company?
#anonymous #discuss #career