Have you ever dreamed of writing more content in less time? One of the solutions is a Markdown editor. Let’s find the perfect one for you.

I used to think that we all take notes the same way. Wrong. It wasn’t until I looked for a Markdown editor that I realized this truth: Everyone is very opinionated about what a note taking app should look like.

In my case, I want a note taking app with Markdown support. Or a Markdown editor that allows me to take a variety of notes, not just programming ones.

Oh Markdown editor, where art thou?

During my daunting search, I realized that I wasn’t specific enough. The clearer I get with my criteria, the less time it takes for me to find the right beau. I found myself asking a lot of questions that I hadn’t thought of:

Do I want a WYSIWYG, or a no-nonsense Markdown editor? Simple tool is usually not versatile and customizable.

Do I need cross platform?

Can I dictate where my notes are stored?

How much money am I willing to drop for Markdown app?

What bells and whistles do I need in addition to the standard Markdown support? If all I do is writing codes and documentation, a simple app like Macdown would suffice.

However, I also take a copious amount of study notes, and write online content fairly frequently. At the minimum, I need a nice option for file attachment.

How important does UI rendering play in my decision? I thought I was easy going about UI, until I used SimpleNote.

The list goes one and on, but below is my pick, in case you are scratching your head about what Markdown editor to use.

Okay, I know what you’re going to say. Notion is pseudo Markdown editor. Indeed, if you google “markdown editor”, the name Notion will never come up.That’s because it can do many things: note taking, project management, life planning, big-picture review etc. 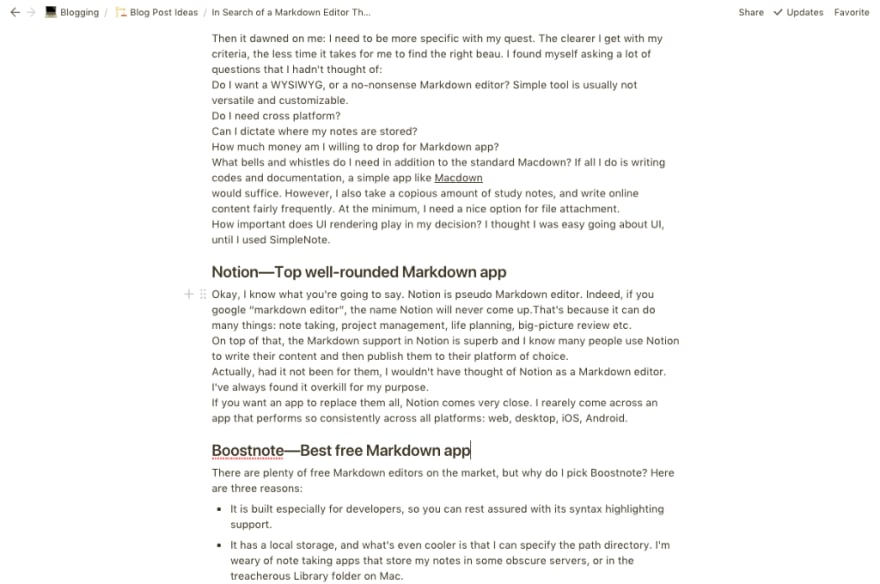 But what really tipped the scale towards Notion is that its Markdown support is superb. Don’t be fooled by its WYSIWYG interface. You can write all your content without ever leaving the keyboard.

I know many people use Notion to write their content and then publish them to their platform of choice. Actually, had it not been for them, I wouldn’t have thought of Notion as a Markdown editor. I’ve always found it overkill for my purpose.

If you want an app to replace them all, Notion comes very close. I rearely come across an app that performs so consistently across all platforms: web, desktop, iOS, Android. 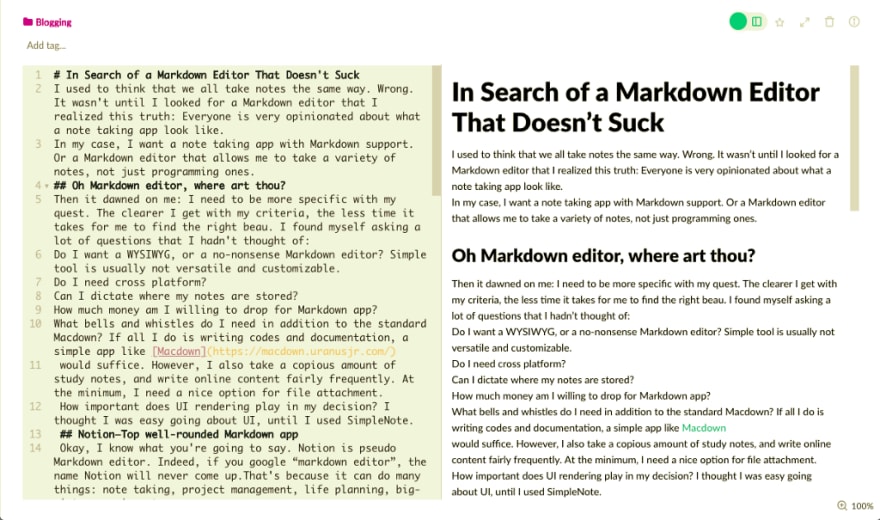 There are plenty of free Markdown editors on the market, but why do I pick Boostnote? Here are four reasons:

That being said, Boostnote is an open-source app and its UX is not clear. Besides, you would have to use third-party serivices like Dropbox for syncing. But Typora doesn't offer syncing either, so Boostnote makers have nothing to feel ashamed about.

For now, I’m grateful that I can get so much out of a free app, thanks to a group of generous developers.

Typora is a minimal, distraction-free Macdown editor. If you are a writer, journalist, student etc, I have no doubt that you would love Typora. 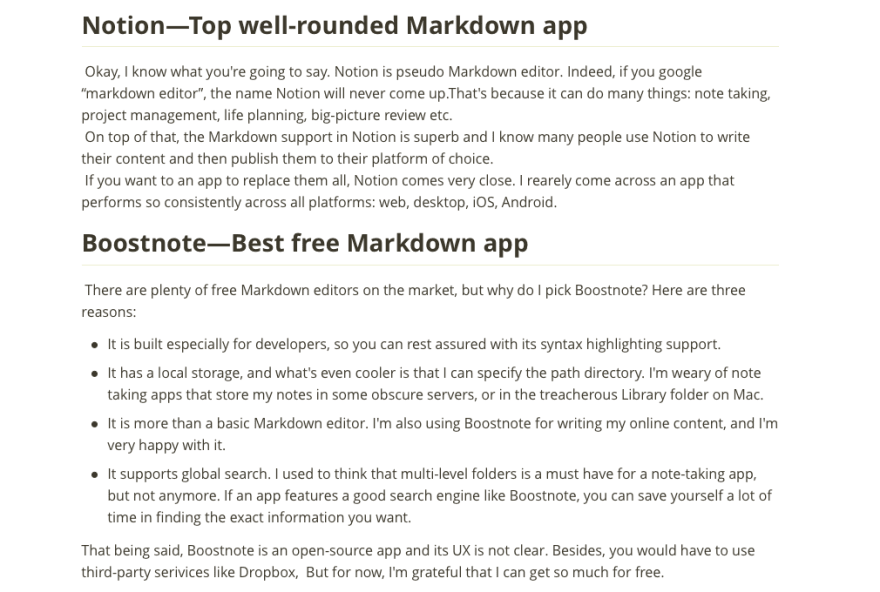 You write Markdown as usual, and when you leave the current line, Typora renders your input. There is nothing I dislike about Typora, but I hesitate to commit to it, knowing that it is still a beta and there is no word on the future pricing model.

Better the devil you know.

That’s what I realized after spending a not-so-small amount of unproductive time on researching, exploring, and testing Markdown editors. And that’s not all.

If you want to get the most out of an app, you need to spend time learning its shortcuts and configuring it to your liking, so that it becomes automatic.

So, what is your favorite Markdown editor? I won’t get sidetracked by another shiny app, but I love to hear your thoughts.

I finally switched from Sapper to SvelteKit

Once suspended, bytrangle will not be able to comment or publish posts until their suspension is removed.

Once unsuspended, bytrangle will be able to comment and publish posts again.

Once unpublished, all posts by bytrangle will become hidden and only accessible to themselves.

If bytrangle is not suspended, they can still re-publish their posts from their dashboard.

Once unpublished, this post will become invisible to the public and only accessible to Trang Le.

Thanks for keeping DEV Community safe. Here is what you can do to flag bytrangle:

Unflagging bytrangle will restore default visibility to their posts.