There are 23 classic design patterns which are described in the original book Design Patterns: Elements of Reusable Object-Oriented Software. These patterns provide solutions to particular problems often repeated in software development.

In this article, I am going to describe how the Factory-Method Pattern works and when it should be applied.

On many occasions we need to create different types of objects that are not known a priori from a list of possible objects. The natural tendency is to create a factoryManager class that allows us to obtain the different types of objects based on a parameter. However, this solution has two serious drawbacks that we will describe throughout this article:

The following code shows the classic problem in which there is a create method that returns an object of a type based on a parameter pass as an argument:

The Factory-Method pattern allows for clearer code, since it avoids the problem raised above. The UML diagram of this pattern is as follows:

The classes that make up this pattern are the following:

It is important to clarify several points that are often misunderstood as a result of the name of this pattern:

Factory-Method Pattern: When To Use

The Factory-Method pattern has a number of advantages that can be summarized in the following points:

However, the main drawback of the factory-method pattern is the increased complexity in the code and the increased number of classes required. This a well-known disadvantage when applying design patterns — the price that must be paid to gain abstraction in the code.

Next we are going to illustrate two examples of application of the Factory-Method pattern:

In this first example, we’re going to translate the theoretical UML diagram into TypeScript to test the potential of this pattern. This is the diagram to be implemented:

First of all, we are going to define the interface (Product) of our problem. As it is an interface, all the methods that must be implemented in all the specific products (ConcreteProduct1 and ConcreteProduct2) are defined. Therefore, the Product interface in our problem is quite simple, as shown below:

The next step is to define the Creator abstract class in which an abstract factoryMethod must be defined, which is the one that will be delegated to the concrete classes for the creation of an instance of a concrete object. The really important thing is that it must return an object of the Product class.

On the other hand, the operation method has been defined which makes use of the factoryMethod abstract method. The factoryMethod method that is executed will be that of the concrete class in which it is defined.

Finally, we would see how the class Client or Context can select which objects created without prior knowledge, and how this pattern keeps the Open-Closed Principle (OCP).

Example 2 - POS of a Restaurant (Simple-Factory)

In this example, a solution will be developed that does not satisfy the Factory-Method pattern but uses a FactoryManager class that is responsible for building any object. This solution breaks with the Open-Closed Principle, in addition to having spaghetti code in the creation of objects. The interesting thing is that this same example is refactored into the following example using the factory-method pattern.

The solution proposed here is not a design pattern, but it is a solution that is widely used in the industry. In fact, it has been called Simple Factory and has serious problems as the application scales.

The application to be built is a simple application that allows you to create different types of objects: Pizza, Burger or Kebab.

The creation of these objects is not known a priori and depends on user interaction. The ProductManager class is in charge of building an object of a certain class through the createProduct method.

Below is the UML diagram of this first proposal. A priori the two problems of this solution are already observed:

As in other examples, we will gradually show the code for the implementation of this solution. The Product interface is exactly the same as the one used in the solution proposed by the Factory-Method pattern.

The next step consists of the implementation of each of the specific objects that you want to create in this problem: Burger, Kebab and Pizza.

Finally, we implement the ProductManager class, which is responsible for creating each of the object types based on the type parameter. An enum type has been used that allows us to avoid using strings in the use of the switch-case statement.

Finally, it would be necessary to show the Client or Context class that makes use of the productManager class. Apparently from the Client class it is not observed that under this class there is a strongly coupled code that violates the principles of clean code.

In this example, we are going to take up the problem posed in Example 2 (POS of a restaurant) to propose the solution using the factory-method pattern. The objective of this solution is to avoid the spaghetti code that has been generated in the productManager class and to allow respecting the Open-Closed Principle.

Therefore, following the same methodology as the one we have presented in the previous examples, we are going to start by looking at the UML diagram that will help us identify each of the parts of this pattern. 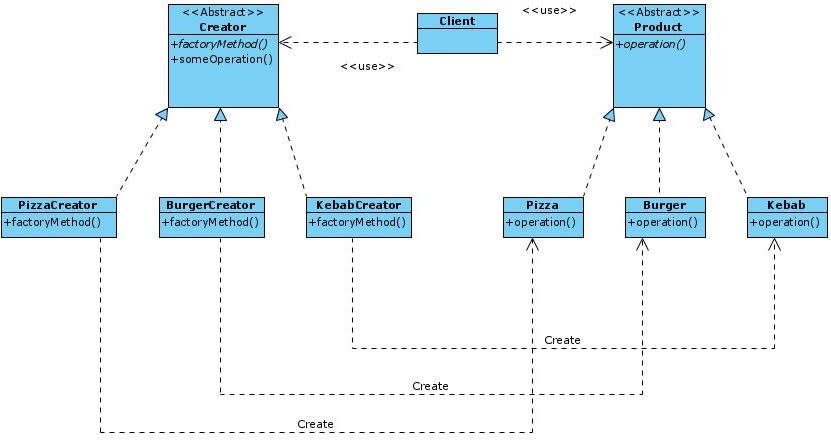 In this case, the objects that we want to build would be those corresponding to the Pizza, Burger and Kebab classes. These classes implement the Product interface. All this part of code is identical to the one presented in the previous example. However, let's review the code to keep it in mind:

We would still have to define each of the specific BurgerCreator, KebabCreator and PizzaCreator creator classes that will create each of the specific objects (NOTE: remember that it is not necessary to always create an object, if we had a structure of data from which instances that were cached were retrieved, the pattern would also be implemented).

The last step we would have to complete our example would be to apply the pattern that we have developed using it from the Client or Context class. It is important to note that the Client function does not require any knowledge of the Creator or the type of object to be created. Allowing to fully delegate responsibility to specific classes.

Finally, I have created three npm scripts through which the code presented in this article can be executed:

Factoy-Method is a design pattern that allows respecting the Open-Closed Principle and delegates the responsibility for creating objects to specific classes using polymorphism. This allows us to have a much cleaner and more scalable code. It mainly solves the problem that arises when it is necessary to create different types of objects that depend on the interaction of a client with the system, and that it is not known a priori which object the client will create.