There are 23 classical design patterns which was described in the original book,
Design Patterns: Elements of Reusable Object-Oriented Software. The patterns provides a solution to a particular problem which is repeated in the software
development.

In this article, I’m going to describe the Strategy Pattern how it works,
how and when should be apply. This pattern is known as Policy in other
context.

Define a family of algorithms, encapsulate each one, and make them
interchangeable. Strategy lets the algorithm vary independently from clients
that use it — Design Patterns: Elements of Reusable Object-Oriented Software

The main feature of this pattern is that the client have a set of algorithms in
which a specific algorithm will be selected for use during runtime. This
algorithms are interchangeable between them.

The following code show the classical problem in which you need selected a
concrete algorithm in your app. In this code, you use the switch control
structure of any programming language. 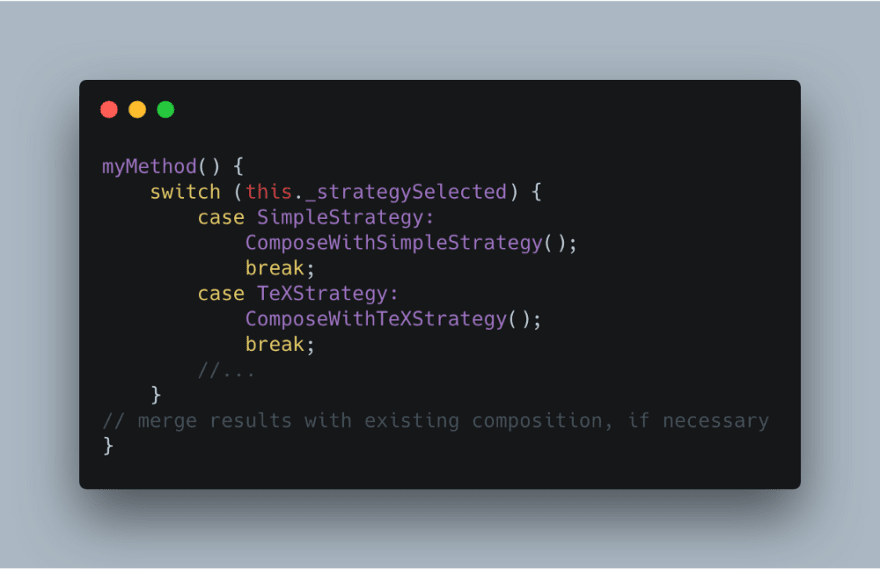 However, it can be more flexible using the Strategy Pattern which will be
the following structure:

The UML’s diagram of this pattern is the following:

Each strategy is represented using a concrete object. So, the client/context
contains a Strategy object (concreteStrategyA, concreteStrategyB,...) which
implements the in interface Strategy. The key of interchange between strategy
consists in implement a method in context which change the strategy, for
example, setStrategy.

Strategy Pattern: When To Use

The Strategy Pattern have several advantages which can be summary in the
following points:

Now, I’m going to show you how you can implement this pattern using JavaScript,
you must remember that Javascript lacks interfaces. So, you need programming a
class called StrategyManager which is used as the interfaces: 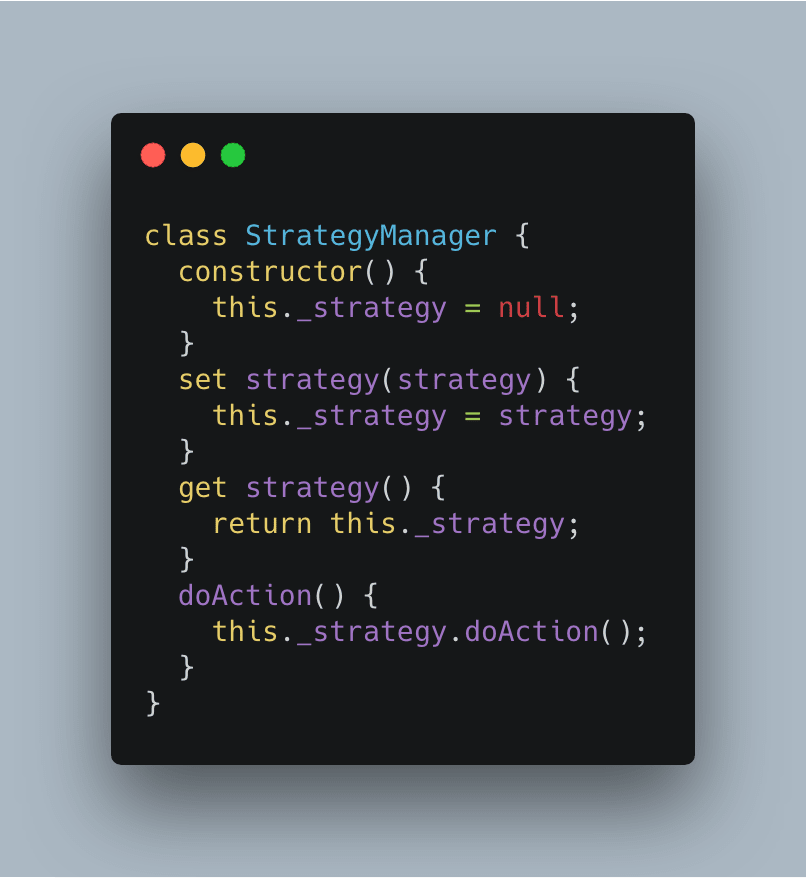 This class contains a private attribute called _strategy which represents the
strategy that will be used in this moment. The method doAction is the method
which will be implement in each concrete Strategy. The Strategy pattern differ
from the UML in JavaScript due to lack of OOP features in the language.

The implementation of each concrete Strategy is the following: 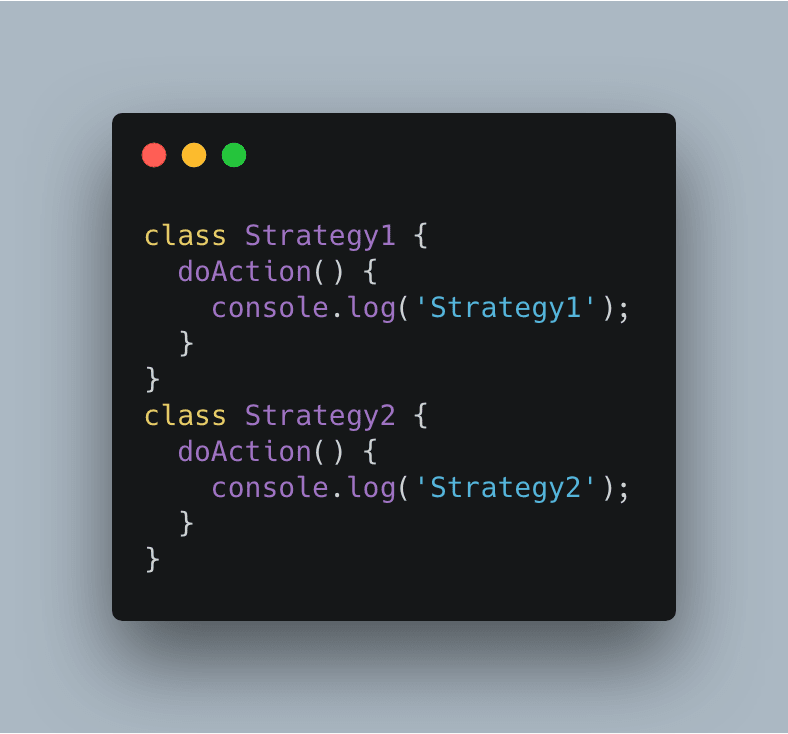 Note that the concrete method doAction is implemented in each concrete
strategy.

Finally, the context/client must contains the StrategyManager (or strategy
interface is the language is OO) to use the concrete strategy: 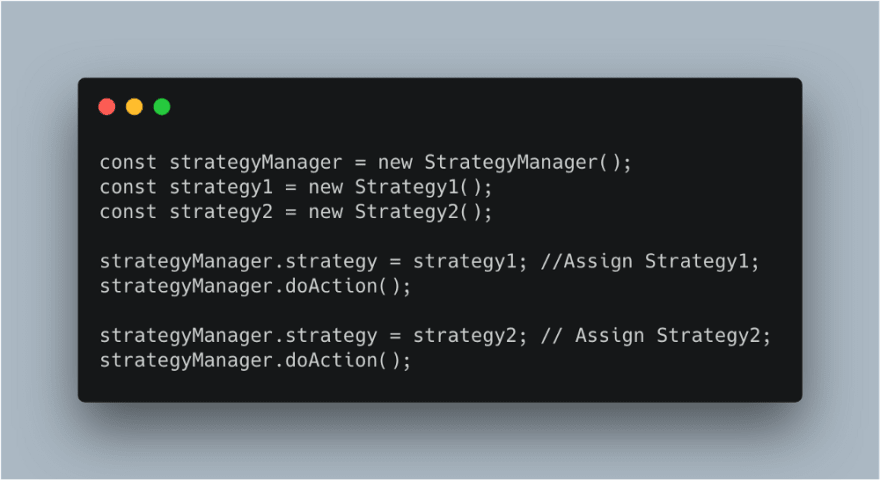 In the following implementation, our StrategyManager can be more complex and
contains a list of algorithms. In this case, you can change the attribute
_strategy instead of an array called _strategies.

Finally, you can add new strategies in our list of strategies using the method
addStrategy. The Strategy class have two attributes: 1) Strategy’s name; 2)
Algorithm (called handler). The method doAction is the used to invoke the
concrete algorithm. 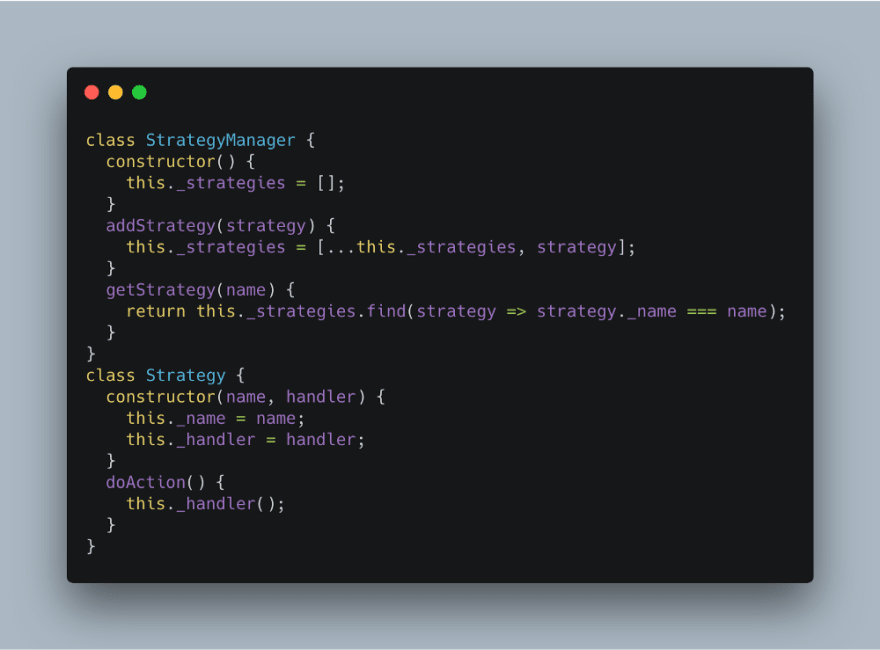 Finally, the client/context code where we use the concrete strategy is the
following: 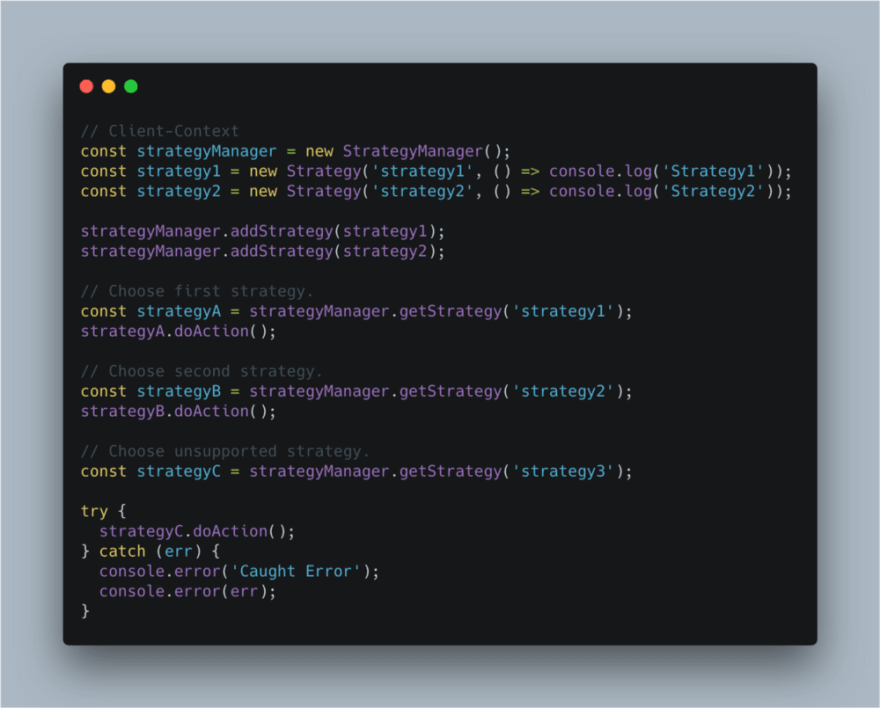 The first part is create concrete strategies (which can be construct using the
Singleton pattern and the Factory pattern) and added in our
strategyManager (which could be our interface). The next part of the client
is selected the strategy to use, this strategy can be selected using a GUI
or CLI from our app.

Finally, you can note that if a unsupported strategy is selected the system
return an error. This can be used when you want provide a premium algorithm to
your system.

Strategy Pattern is a pattern which can avoid complex in your code when need
selected a concrete algorithm. In this post you can obtained a simple
implementation using the language JavaScript which lacks interfaces. In the case
that you use a programming language which has interface you can follow the
pattern’s UML.

The most important is not implement the pattern as I’ve shown you but you need
know what’s the problem which the pattern resolve and why you must use because
the implementation will be different depends of the programming language.

Hi! My name is Carlos Caballero and I’m PhD. in Computer Science from Málaga,
Spain. Teaching developers and degree/master computer science how to be experts

Angular Vs React: Which JS Framework Choose for Your Business?

Upgrading a create-react-app game to React 18

The Brain**** interpreter I made is on Sololearn.