As always with these posts, you can be sure you've got all of the basic knowledge you need by reading my Flutter book, but not all of you like that way of learning, so I'll list the topics which are considered prerequisites for this post.

For the local notifications part, you need to know the following:

The backend for our app will be the one we wrote for the previous post in the series. The app itself will be based on that, so I highly recommend you read the last part of that post if you want to understand how we've got topics a fully working example app at the end of this post. One way or another, here's the GitHub repository with the example Flutter code:

and, for your convenience, here's the repo for the Node.js backend code:

Backend for a Flutter app used as example code in a carmine.dev blog post about WebSockets

In Flutter apps, you can show notifications to the user while the app is running using the flutter_local_notifications package. It is fairly easy to use.

Before being able to use the plugin, you need to initialize it. This requires two different configuration steps: Android configuration and iOS configuration. Even though this is platform-specific, this is all done in Dart code. More specifically, plugin initialization works the following way:

Take note of its name because, in order to initialize the flutter_notifications package, you need an AndroidInitializationSettings object, which is created in the following way:

The configuration for iOS is at the same time simpler and harder: there is no required argument, but there are a bunch of optional ones, which are fine to be left to default values and that you can find on the official API reference for the package. By default, it will ask the user to give permission to the app to show notifications when the plugin is initialized.

The notifications can be shown with plugin.show(id, title, body, NotificationDetails);.

title and body are self-explanatory, id can just be set to 0.

The AndroidNotificationDetails constructor requires all of the arguments Android requires to show notifications. More specifically, Android Oreo (8.0, API level 26) and successive releases allows users to have different settings for different notification channels originating from the same app. The channelId can be any integer, you use the same number for notifications to be sent on the same channel and you use different numbers for different channels. channelName and channelDescription are names the user will use to differentiate your app's channels, so they should be descriptive of the purpose of each notification channel if you plan to use multiple channels (e.g. a social networking app could have a channel for follow requests, one for direct messages received, one for likes to posts, etc.). 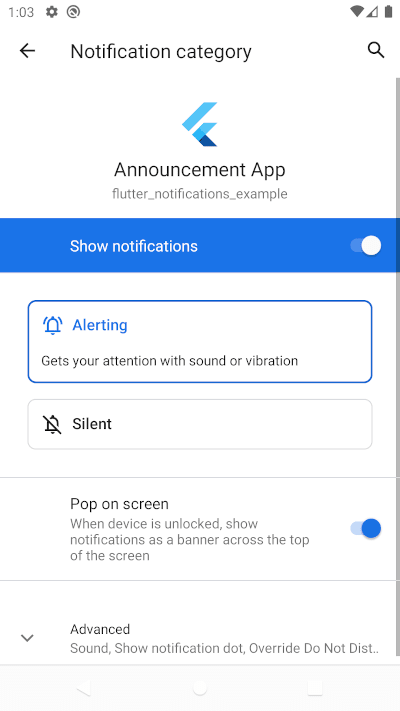 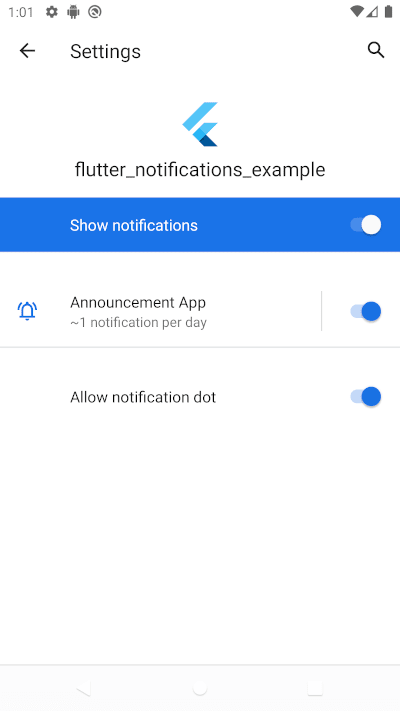 Here's an example, where notifications is the FlutterLocalNotificationsPlugin object:

Using It In The App

This second part of the post is going to be about using the plugin in an app, more specifically changing the app we built in the previous post to also display notifications to the user. If you don't want to read that but still want the code we are starting from here's the GitHub repo of the previous post's app:

whereas this is the one for the app we'll build in this post:

First of all, add flutter_local_notifications to the dependencies in pubspec.yaml:

and import it at the start of main.dart. You'll notice we are also importing the status codes for the WebSocket library, which we'll need when we close the connection to the server in the dispose() method of the State of the AnnouncementPage:

Summary of The Changes

The AnnouncementPage becomes a StatefulWidget, we don't use a StreamBuilder, instead we wait for new data, change what's displayed and also show a notifications. here's the entire AnnouncementPage and AnnouncementPageState that we'll analyze in more detail in the next section of the post:

One of the changes you need to keep in mind is that we now have a text String variable that we will update as we get data from the server, and that text is what's going to be displayed on the user's screen.

The flutter_local_notifications package has to be initialized. This can be done in multiple places. You could to do it in main and have a global variable to be able to access the notifications plugin from anhywhere within the app without having to use InheritedWidgets or the Provider. In our case, though, we don't really need that, as there really is only one widget that's going to cause notifications to be displayed, which is our app's AnnouncementPage. What we need to do is define a StreamSubscription that listens for changes in the stream received from the WebSocket and, if there are any, both updates the AnnouncementPage to show the new announcement (by calling initState and setting the text variable) and displays a notification.

All of this is done in the initState method:

The build method now simply needs to display the text we already get using the StreamSubscription, without requiring the use of a StreamBuilder. If the connection hasn't been established yet, which would mean text is still null, we display a CircularProgressIndicator as we did when we used a StreamBuilder and we had no data yet. Given that the nickname is now defined inside the AnnouncementPage StatefulWidget definition, we need to access it using the this.nickname syntax in the onPressed callback for the FloatingActionButton that sends announcements.

The dispose() method needs to close the WebSocket, letting the server know it's being closed and freeing resources on both ends of the connection, and cancels the StreamSubscription because it's not necessary anymore to listen for new announcements.

That's it! The app now sends notifications when it gets new announcements (including when it's the one generating them, but for this app this is intended)!

The entire main.dart is going to be the following:

Receiving Notifications in The Background

People have complained that I focused on Firebase too much in my book, so I'm trying to compensate here on my blog by focusing on more traditional backend implementations and ways to do things.

You can now subscribe to my newsletter to get email updates about new posts and, as always you can follow me on Twitter if you are active on there and want to be updated, and remember to check out my Flutter book in case you haven't yet.

How to dockerize your laravel app for heroku container registery

What Makes Your Code More Readable I

Carmine Zaccagnino
I write some code. Occasionally, I also write sentences in natural language. You can find a mix of the two here.
The Current State of Flutter for the Web
#flutter #webdev #dart
Securely Storing JWTs in (Flutter) Web Apps
#webdev #dart #security #tutorial
Subscribe to my newsletter!
#dart #webdev