While working in Python you may come across cases where you want a quick way to run programs from the command line. This could be your own python scripts or any other command line program. This is where the subprocess module can come into play.

The subprocess module, present in a standard installation of Python is used to run new applications or programs through Python code by creating new processes.

It gives us the ability to:

A common use for subprocess would be to list files and folders in a directory. This makes use of the run method of subprocess.

The code will differ depending on what operating system you are on. For example, on a windows based computer this would be using the command dir

In the code above we have:

We automatically got output in the terminal even though we did not print it ourselves. That is how the run command works – it does not capture our command output by default.

The output is not what you would expect. We get the output still, and a message containing the arguments that were passed and the return code.

If we wanted to capture the output we would modify out code to this:

The same can be achieved with the follow code:

The difference is stdout=subprocess.PIPE This code performs the same function as capture_output=True

In addition, we use the ls command with the argument of -la both passed as a list 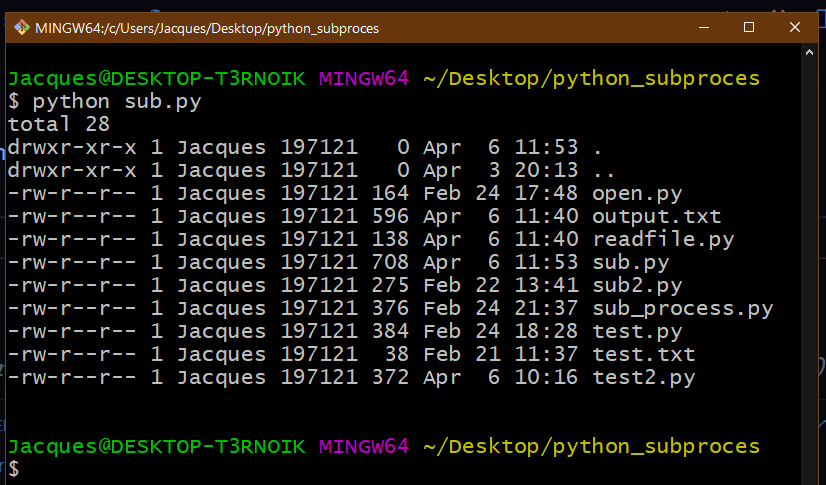 There's still more you can do with subprocess including outputting to a file, reading data from a file, and to trigger programs interactively to name a few things. Find out all of these and more at: Full Article at PythonHowToProgam

Once suspended, charlesw001 will not be able to comment or publish posts until their suspension is removed.

Once unsuspended, charlesw001 will be able to comment and publish posts again.

Once unpublished, all posts by charlesw001 will become hidden and only accessible to themselves.

If charlesw001 is not suspended, they can still re-publish their posts from their dashboard.

Once unpublished, this post will become invisible to the public and only accessible to Charles White.

Thanks for keeping DEV Community 👩‍💻👨‍💻 safe. Here is what you can do to flag charlesw001:

Unflagging charlesw001 will restore default visibility to their posts.