I'm a man of few means, and a developer of even fewer lines of code.

This is my button

This is my textfield

... and this is my login screen with avant garde security

Looks about fine, right? Go through this gem of a code, and you will have a rough idea of how it will work. You can take it out for a spin on this dartpad.dev snippet.

If you failed to notice, go back and try these steps again. Enter a phone number, press on send otp, and while the textfield changes, the phone number is prefilled in that field. You can see the otp hint text once you clear the prefilled number. But why is this behaviour happening?

A general adage for Flutter is "It's all widgets". For eg, Padding is not a property of a widget but a widget itself. As a result Flutter has to handle a deeply nested widget tree. Traversing this whole tree the usual way will result in bad performance, so Flutter has some tricks up its sleeve to achieve it in sublinear time.

One of these tricks is not visiting the tree if the child has not marked itself as dirty(change of state). This tree also holds the state of the widget. Now to find which of the widgets is dirty, a tree diff algorithm would be easier, but not necessarily efficient, so Flutter uses its own algotithm of O(N) complexity. Keep in mind that most layout alsorithms you will find are O(n^2) or worse, and a sublinear algorithm is key to achieve a 60fps render in Flutter

The child list reconciliation algorithm optimizes for the following cases:

In my case, the runtime type was the same, and because there were no keys assigned to the widgets, they were considered to have the same state. So while the widget is switched because of a simple boolean flag, the state of that widget is not. And thus the state of the old widget is imposed on the new one, because the poor thing could not distinguish one from the other :(

The easy fix is to pass each of the textfields a unique key!

Why this felt like a bug to me at first was because we are accustomed to differentiating different objects of same runtime types depending on their instances, and at times by the data they hold. Things get clearer though once we understand why Flutter does the things it does, doesn't it? 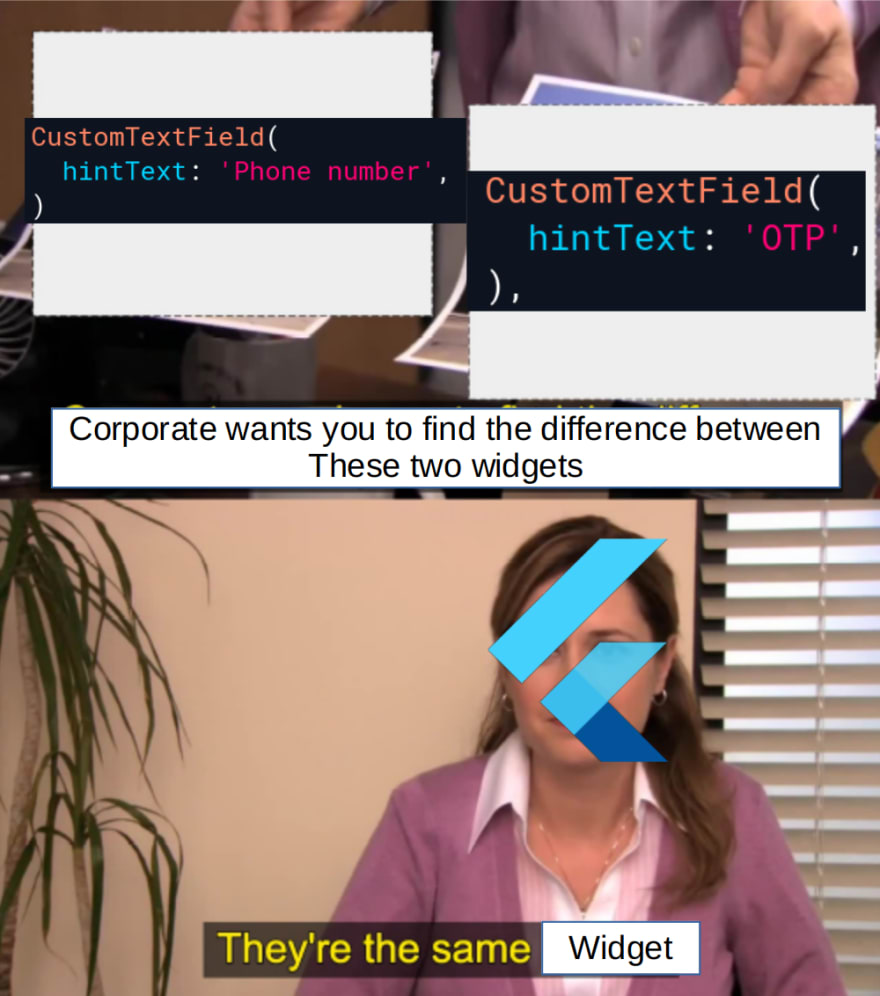 If there's something more to it that I might have missed, feel free to chime in the comments!

Once suspended, chinmaykb will not be able to comment or publish posts until their suspension is removed.

Once unsuspended, chinmaykb will be able to comment and publish posts again.

Once unpublished, all posts by chinmaykb will become hidden and only accessible to themselves.

If chinmaykb is not suspended, they can still re-publish their posts from their dashboard.

Once unpublished, this post will become invisible to the public and only accessible to Chinmay Kabi.

Thanks for keeping DEV Community 👩‍💻👨‍💻 safe. Here is what you can do to flag chinmaykb:

Unflagging chinmaykb will restore default visibility to their posts.