Don’t worry, I translated the title!

Since many years, I started learning Japanese at school, It was a fail for me because I didn’t practice it and I forgot everything. Then every time I retry, It becomes hard to me until I found the best practice to learn it.

First, I installed this application. 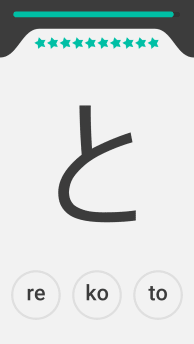 This is thanks to the application Hiragana Pro. Its purpose is to show you the letters randomly from the beginning until you can memorize them.

Obviously it takes time. That’s why I took it as a challenge.

After learning all Hiragana caracters, we have to learn Katakana too, because these letters are used to write our names, and the international things for exemple : “コンピューター” (Computer)

It’s not easy as we thought but after a while I start to take interest in Kanji.

… And this is a hardest things I’m trying to resolve.

The Kanjis are not letters but rather a meaning. A meaning that The Japanese use to define the sense of the sentence and at the same time they pronounce Kanjis as Chinese.

My first Kanji I learned is 私. it is (Watashi == ‘I’) but in a way too polite. We use 私 as the beginning of the sentence to indicate that the subject is the “me”.

Grep.app is spectacular for code search

View this solution on Exercism, work with array

Once suspended, chokri will not be able to comment or publish posts until their suspension is removed.

Once unsuspended, chokri will be able to comment and publish posts again.

Once unpublished, all posts by chokri will become hidden and only accessible to themselves.

If chokri is not suspended, they can still re-publish their posts from their dashboard.

Once unpublished, this post will become invisible to the public and only accessible to Chokri K'.

Thanks for keeping DEV Community 👩‍💻👨‍💻 safe. Here is what you can do to flag chokri:

Unflagging chokri will restore default visibility to their posts.