In this article, we are going to explain the growing importance of developing mobile app using Python along with its popular frameworks, features & advantages.

Python swiftly rose to become one of the favorite programming languages for web development in the past decade and in recent years, Python has begun to capture a significant share in the mobile application development market. The ongoing popularity and the rising demand for this language is because of its simplistic approach to create high-end applications.

The language uses minimized lines of codes and has various features that allow the developers to write complex programs with ease. TIOBE Index identifies Python as the most demanded programming language of 2019. And if you're curious about Python's superiority in web application development, here is the comprehensive guide for web development in Python, choosing its frameworks & advantages as well.

Below is the graph of usage of different programming languages over the last 8 years and Python has seen to be clearly dominating the graph after 2018. 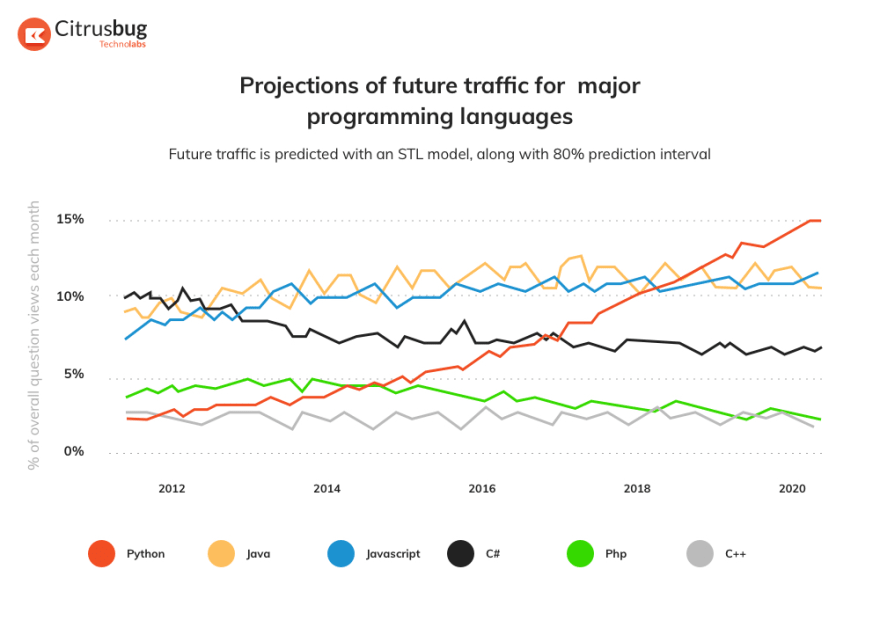 That being said, how Python being popular, can be useful for you? Well, if you work with a popular language, the probability to find a solution for any complex problem becomes higher. In fact, if your problem is common enough, you might get an already available ready-made solution for the problem. Now let us dig a little deeper and explore more about Python and its uses in mobile app development.

Python is a dynamic object-oriented programming language that focuses on rapid application development. Its easy-to-understand syntax and wide range of libraries put it ahead of other programming languages and make it a preferred choice for developers. Here are some of the reasons that make Python special:

What are the Most Preferred Frameworks of Python for Mobile App Development?

There are a number of Python frameworks that are capable of developing functional mobile applications such as CherryPy, Numpy, Flask, Pandas, Django, etc. However, the two most-chosen options by the majority of mobile app developers are Kivy and BeeWare. Both these frameworks are cross-platform guided user interfaces that give you the benefit of enjoying an app on different mobile devices such as Android, Mac, etc. 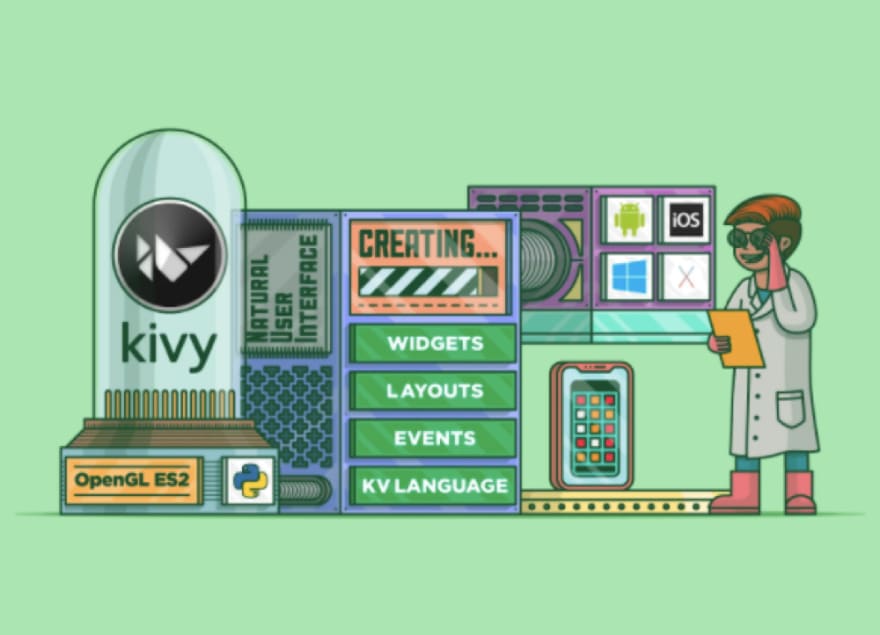 Kivy is an open-source Python library that is used for developing cross-platform GUI applications. It is a great choice for developers who love to work with non-native UI toolkits in mobile apps. The default custom-built UI toolkit available in Kivy offers its own version of text labels, buttons, text entry forms, and other widgets.

This saves plenty of rendering time as widgets need not render using the native platform UI controls. It improves the consistency and portability of working your application on different platforms. The graphic engine of Kivy is built over OpenGL that makes it efficient in handling larger GPU-bound workloads when required. 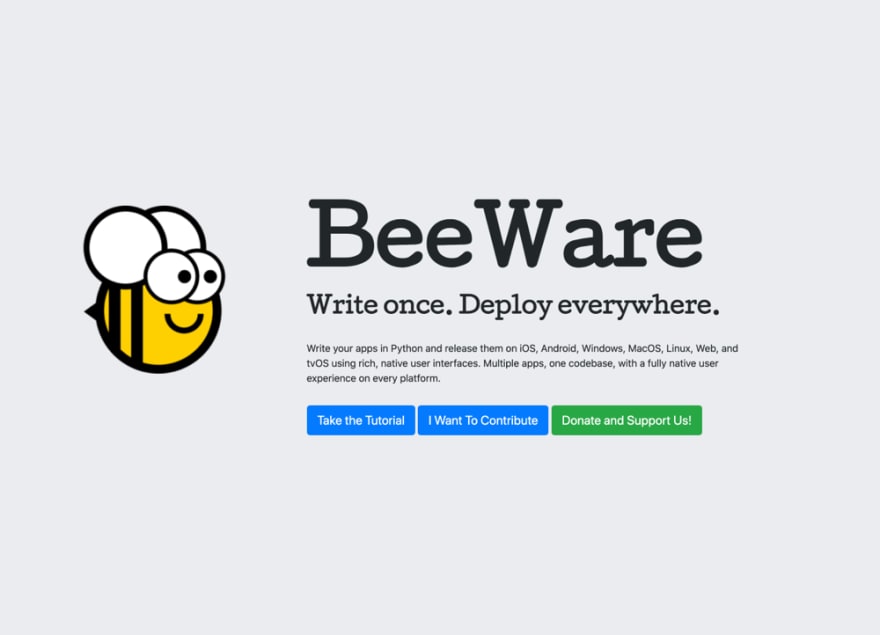 BeeWare is another graphical user interface mobile app development framework. It includes an abstract layer in its framework and a set of useful tools that develops original-looking mobile applications. BeeWare uses the native UI toolkit that uses elements such as checkboxes, forms, and buttons provided by the base operating system. This gives the application the exact same feel of originality on every mobile device.

More or less both the frameworks function absolutely well in developing commercial apps with high precision. And as you know Python is also used in AI & ML tech stack, here is the list of best Python libraries for Machine learning & Artificial Intelligence.

What Makes Python the Best Language for Mobile App Development?

The numerous perks that Python offers to its developers differentiate it from the other languages. Here are some of its best features: 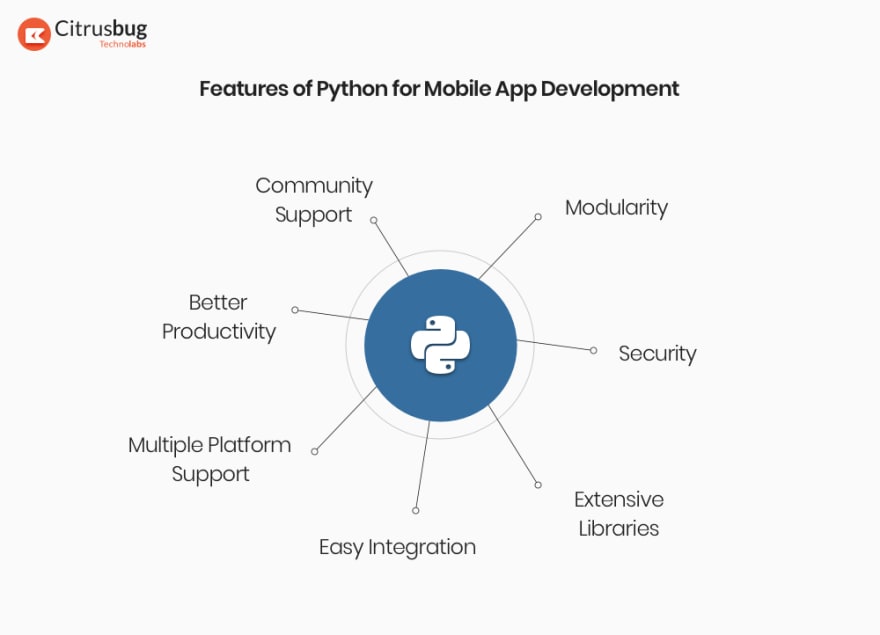 The biggest merit of Python is that it is modular. You can create separate modules for your application and combine them later to form a single app. This provides the developers with an advantage to distribute their work without affecting the progress of the project.

When you select Python as your application’s programming language, you secure it from all types of cyberattacks. The robust backend and various security added features of its different frameworks make it an extremely difficult language to crack.

This is the major reason for Python being so popular among the developers. It has enormous already built libraries available on the web that can be used in your code. Developing applications becomes extremely simple when you can get the code online for the functions you need in your app. This saves huge time for the developers and even reduces the development cost of the app.

As Python is an open-source language that supports modularity, applications made using Python are easy to integrate with other tools and technologies. The app’s functionalities can be extended by integrating third-party tools from the web.

Python, being a machine learning language, has the ability to work with various operating systems from Linux, Unix, Windows, to Mac. You might get amazed to know that a developer can work on over twenty-five different platforms with Python.

Python comes with a complete package of some mind-blowing features. From code reusability to extended function and libraries, a developer can use these features to complete its application within less time frame.

Another good reason to choose Python for your app development is its reliable community support system. There are thousands of tutorials, discussion groups, and forums available online that can help you with the development process. Moreover, several developers and programmers from across the world regularly conduct sessions to resolve user's problems and queries.

Python has already taken over the web application market in the past few years. With its development of popular apps such as Pinterest, Spotify, Instagram, Dropbox, Uber, etc. now it's time for Python to lead the league of the mobile app development market. The simplicity and an impressive set of features that Python offers save a huge amount of time and efforts of the developers, making it their most favored programming language.

So if you too are a mobile app developer, you must look forward to using this magnificent language. On the contrary, if you own a business and want to develop mobile app using Python, you can get in touch with our expert Python programmers for the right guidance.

How I Used Python to Automate a Youtube Channel

Once suspended, citrusbug will not be able to comment or publish posts until their suspension is removed.

Once unsuspended, citrusbug will be able to comment and publish posts again.

Once unpublished, all posts by citrusbug will become hidden and only accessible to themselves.

If citrusbug is not suspended, they can still re-publish their posts from their dashboard.

Once unpublished, this post will become invisible to the public and only accessible to Citrusbug Technolabs.

Thanks for keeping DEV Community safe. Here is what you can do to flag citrusbug:

Unflagging citrusbug will restore default visibility to their posts.