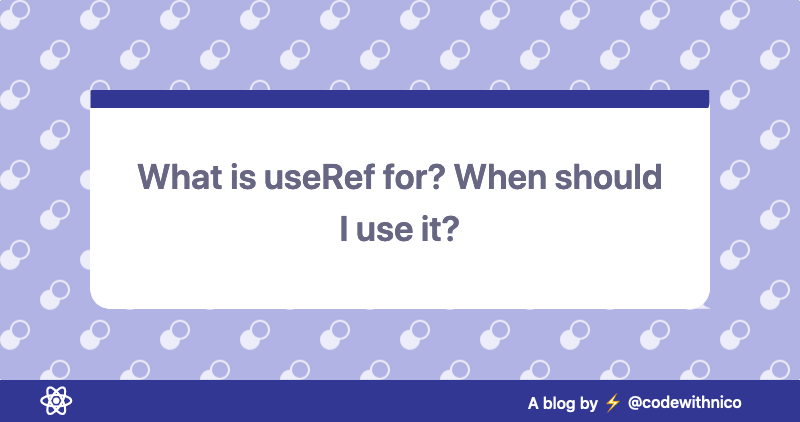 If you have tried reading the docs over and over again but you still don't understand useRef, this post is for you!

useRef is like a box where you can store something for later use. A number, an object, anything you want.

The thing you save in this box is preserved between renders, similar to useState. In other words, the box is not destroyed when your component is updated.

What is it used for?

Ok, cool. useRef is used to store something in the component "memory" but it doesn't trigger a new render when the value is updated.

But what is it used for?

Well, there are two main use cases:

1) To store DOM elements so you can later do something with it.

For example, you can focus the password input when the user press "ENTER" on the email input:

You can do it with useRef (source code):

2) To store values you want to keep an eye on

Sometimes you want to keep an eye on a value but you don't need to trigger new renders when it changes.

Example: storing the previous value of a state variable.

This is a simple application that display a counter and its previous values. It also has two buttons to increase the counter (by 1 and by 10):

React Pro Tip #2 — How to Type `this.props` to Include `defaultProps`

Once suspended, codewithnico will not be able to comment or publish posts until their suspension is removed.

Once unsuspended, codewithnico will be able to comment and publish posts again.

Once unpublished, all posts by codewithnico will become hidden and only accessible to themselves.

If codewithnico is not suspended, they can still re-publish their posts from their dashboard.

Once unpublished, this post will become invisible to the public and only accessible to Nicolás Gómez.

Thanks for keeping DEV Community 👩‍💻👨‍💻 safe. Here is what you can do to flag codewithnico:

Unflagging codewithnico will restore default visibility to their posts.