I have a confession to make - I have a hard time providing code reviews. I tend to nit pick. A lot.

I notice that everyone seems to have a different way of writing code. And sometimes it can be really interesting to see new techniques. But often it can just add a mess to a codebase. Over time, when different developers come in, mark the codebase with their particular style, and leave that codebase for whatever reason, you start to feel like a geologist digging through the layers of the earths' crust.

I mostly review code for Javascript codebases. It’s a great language, and I love it. But it can allow for some fascinating syntax and still work as expected. And when you add JSX all hell breaks loose.

I have a tendency to want perfection. But code isn’t meant to be perfect. Code is a medium by which to describe what a computer should do. You can have the best code in the world, and no one will use it because maybe it doesn’t do anything useful.

Code seems to have an ever decreasing half-life. By which I mean that as soon as you write some code, it starts to decay. It’s usefulness as code becomes less and less, even though it’s functionality may keep living on. Because code is meant to be read by humans , not machines. Machines could care less what your variable names are, or whether you are using a typed language or not. They will do exactly what you tell them to. Nothing more, and nothing less.

If you have worked on any system that you may consider as “legacy” you may know exactly what I mean. The larger a codebase gets, the less likely that someone will go in and clean it up. When someone has to add or fix a feature, they will likely go in and surgically update as little code as possible.

I have a colleague who recently told me that he is less and less inclined to write new code lately. This is because he has started to realize that the more code you write, the more bugs you produce. He is starting to see code, effectively, as a liability instead of a an asset. 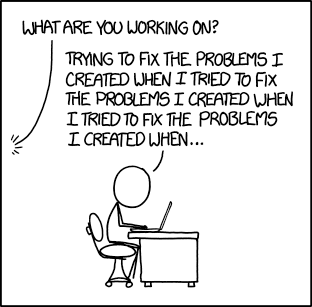 I remember when I first started to transition into web development. I started learning Angular on my own. I learned all of the right ways to write Angular, and internalized the best practices. I even started a pretty ambitious side project to get used to working with the technologies that I wanted to and get my foot into the door at the right company. When I got hired at a company using Angular, I was so excited!

I came in with no real experience in web development. I came in with high expectations of my Angular knowledge. That was until I looked at the codebase. I was so lost 🙈. Part of it was my inexperience, but the other part was how they architected their codebase. It was not using the best practices that I had come to appreciate. When I learned Angular I thought that nothing should go on $rootScope — you might as well place things on the global scope 😱. This was apparently not a shared sentiment. And that was just a small piece of the gigantic puzzle.

This is when I truly learned that code is not written in a vacuum. Everyone brings different experiences and motivations to the way they write and architect codebases. In fact, this is something I am still learning today.

Let's get back to my code review struggle. How have I learned to deal with my own issues and provide valuable feedback without nit-picking everything?

So what about you? Do you have a problem with perfectionism? As a nit-picker or nit-pickee? Let me know how you deal with it? I’m also open to pointers on how I can do better.