Class diagrams are the main building block in object-oriented modeling. They are used to show the different objects in a system, their attributes, their operations and the relationships among them.

An example to understand the relationships
consider a person with his/her gadgets (phones, Laptops etc )

Composition implies a relationship where the child cannot exist independent of the parent.
Battery is part of a phone
A phone can't exist without a battery hence that is an example of composition

Generalization is a mechanism for combining similar classes of objects into a single, more general class.
Phones and Laptops are examples of Gadgets .
class phones can be a subclass of class Gadgets
This is an example of Generalization as phones inherit attributes from the super class Gadgets

Representation of the relationships 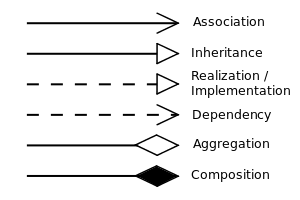