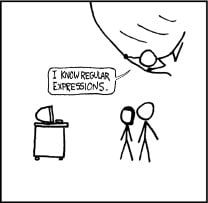 Sometimes a good regular expression can save a lot of time and lead to a robust, yet flexible system that works very efficiently in terms of performance. It may feel like having superpowers. I don't remember when exactly I've decided they were useful, but it happened during my PHP period, when the Linux command line system and its multitude of tools made using regular expressions a pretty obvious decision. Fast forward (waaaay forward) and now I am a .NET developer, spoiled by the likes of Visual Studio and the next-next approach to solving everything, yet I still use regular expressions, well... regularly, sometimes even when I shouldn't. The syntax is concise, flexible and easy to use most of the time.

And yet I see many senior developers avoiding regular expressions like they were the plague. Why is that? In this post I will argue that the syntax makes a regular pattern be everything developers hate: unreadable and hard to maintain. Having many of the characters common in both XML and JSON have special meaning doesn't help either. And even when bent on learning them, having multiple flavors depending on the operating system, language and even the particular tool you use makes it difficult. However, using small incremental steps to get the job done and occasionally look for references to less used features is usually super easy, barely an inconvenience. As for using them in your code, new language features and a few tricks can solve most problems one has with regular expressions.

The most common scenario for the use of regular expressions is wanting to search, search and replace or validate strings and you almost always start with a bunch of strings that you want to match. For example, you want to match both dates in the format 2020-01-21 and 21/01/2020. Immediately there are problems:

But all of these questions, as valid as they are, can be boiled down to one: given my input, is my regular expression matching what I want it to match? And with that mindset, all you have to do is get a representative input and test your regular expression in a tester tool. There are many out there, free, online, all you have to do is open a web site and you are done. My favourite is RegexStorm, because it tests .NET style regex, but a simple Google search will find many and varied tools for reading and writing and testing regular expressions.

The syntax does present several problems that you will hit every time:

Combine this with the escape issue and the duplication of subpatterns issue and you get every developer's nightmare: a piece of code they can't understand and they are afraid to touch, one that is clearly breaking every tenet of their religion, like Don't Repeat Yourself or Keep It Simple Silly, but they can't change. It's like an itch they can't scratch. The usual solution for code like that is to unit test it, but regular expression unit tests are really really ugly:

Last, but not least, regular expressions can work poorly in some specific situations and people don't want to learn the very abstract computer science concepts behind regular expression engines in order to determine how to solve them.

There are two major contexts in which to look for solutions. One is the search/replace situation in a tool, like a text editor. In this case you cannot play with code. The most you can hope for is that you will find a tester online that supports the exact syntax for regular expressions of the tool you are in. A social solution would be to throw shade on lazy developers that think only certain bits of regular expressions should be supported and implemented and then only in one particular flavor that they liked when they were children.

The second provides more flexibility: you are writing the code and you want to use the power of regular expressions without sacrificing readability, testability and maintainability. Here are some possible solutions:

30 Top Apps Made With Python