Today's topic is Confirmation dialog box in Angular. It's been a while since my last post, and this one might be pretty useful for Angular developers. In the following several passages I'll try to answer several questions:

What is the confirmation box in Angular?

It is a simple popup that prevents unwanted actions, for example when the user clicks the delete button, the popup dialog should appear with the question: "Are you sure you want to delete item data?" and two buttons "Confirm" and "Decline". That is an enhanced level of security needed in almost every professional application.

What is the best confirmation dialog for Angular?

It is the ngx-awesome-popup an open-source library made for Angular. It provides highly scalable options and styles to adapt to any angular project. The best part is it's callable only from typescript so it can be used directly in services without HTML templates and it uses observables.

How to integrate it into the project?

1. install it to your angular project:

4. Or use code generator 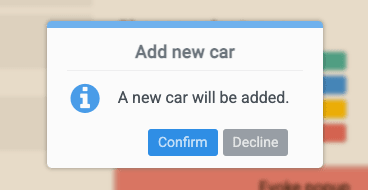 Where to see more?

Once suspended, costlydeveloper will not be able to comment or publish posts until their suspension is removed.

Once unsuspended, costlydeveloper will be able to comment and publish posts again.

Once unpublished, all posts by costlydeveloper will become hidden and only accessible to themselves.

If costlydeveloper is not suspended, they can still re-publish their posts from their dashboard.

Once unpublished, this post will become invisible to the public and only accessible to Boris Jenicek.

Thanks for keeping DEV Community 👩‍💻👨‍💻 safe. Here is what you can do to flag costlydeveloper:

Unflagging costlydeveloper will restore default visibility to their posts.