ASP .NET Core MVC comes with dependency injection built in and the options available will cover most use cases. In this post I will summarize what is available in the framework and how to use it.

I usually did not use dependency injection in my projects in previous versions of the MVC framework. The main reason why is previous versions didn't support dependency injection out of the box and required a 3rd party library like ninject. I thought the projects I worked on would not benefit from it enough to justify another 3rd party library to learn and dependency to keep track of. With ASP .NET Core MVC, that has all changed. Dependency injection is now built in and can be configured directly from the ConfigureServices method in the Startup class through a series of extension methods. It is also available throughout the framework. This includes custom attributes, filters, view components, etc, or POCOs that handle any custom business logic. This makes dependency management a better fit than in previous versions of the framework.

There are 3 main variations for adding dependencies: scoped, transient, and singleton. Scoped will use the same instance for a single web request, transient will create a new instance each time a dependency is needed, and singleton creates a single instance for the entire application. Each of these has several overloads.The table below details the common ones.

The complete list of ServiceCollection extension methods including the ones related to dependency injection can be found on the microsoft docs.

This list covers all common use cases and will meet the requirements for most projects. I have setup a simple project that shows an example of a singleton, a transient, and a scoped dependency. The full source code can be found on GitHub.

The sample application shows a list of books with the ability to add a book. It also keeps track of the total number of pages and tracks each method visited per request. 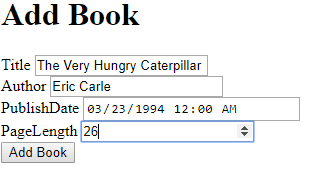 I am not going to go through every detail of the example application but just highlight the parts that use dependency injection. The list of books is stored in memory so it will persist throughout the life of the application. If the application is restarted, the list resets. For this type of behavior, I inject a singleton. Book storage can also have multiple implementations so I defined an interface for it. public class InMemoryBookData : IBookData. The application also features a service named PagesCounter that sums the total number of pages in all books. I'm using the term "service" here to mean a generic class containing business logic. This doesn't need to persist state across requests so it is a transient dependency. The third feature tracks each method called per request titled RequestTrackerData. Because it needs to track each method in a request, it is a scoped dependency. This allows the same instance to be injected into multiple classes with a fresh instance for each request. As mentioned above, dependency injection is configured in the Startup.ConfigureServices method.

Dependency injection happens through constructor injection. The HomeController needs IBookData, RequestTrackerData, and ICounter for the PagesCounter so all 3 are injected and the framework manages what instance is actually passed in.

Writing a COM DLL in C# and interfacing with JavaScript