The thing I like most about web development is that you never stop learning new properties and tricks. These past few months have been weird; working from home, having the company I've worked at for three years stop, and starting as a freelancer. It's been a while since writing my last post, for all those reasons and more, but today I decided to pick it up again and write about all the small triumphs I've had this year learning new things!

In the Safari iOS browser 100vh is calculated on the viewport height regardless of the visibility of the bottom navigation bar. While this is fine most of the time, and is probably preferable to the other option, in which element heights are recalculated when you scroll slightly up, it can be a very weird bug on fixed scrollable containers (like the popups in the following example).

This is a bug many developers have been pulling their hair out to fix for many many years.
Then in April Matt Smith tweeted this and it almost made up for being socially isolated for a month by that point. 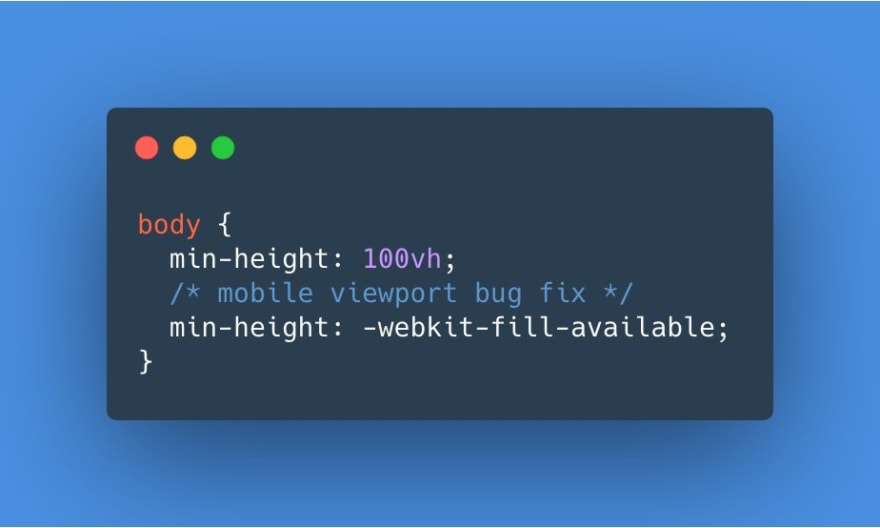 🔥 TIL a #CSS trick to handle that annoying mobile viewport bug with `100vh` in WebKit (iOS Safari)! #WebDev #ProTip

The best way to implement this in my opinion is like Matt does, with a backup for browsers that don't yet understand this property, for example;

I think I'm a bit late to the party, but this might be my favourite CSS discovery this year. It's supported by all modern browsers and allows you to style based on a user's primary input mechanism. The great thing about media queries like these is that you don't have to rely on using screen size media queries which don't always correspond with modern devices (looking at you iPad Pro).

Possible options are pointer, any-pointer, hover, and any-hover, the beautiful thing about pointer is that it accepts coarse, fine or none taking in account the specificity of the pointer device's input. This would allow you to create slightly larger CTA's, inputs or checkboxes for devices that have a coarse pointer input to create a more accessible experience ✨. I believe the fine pointer value is implemented when a user is using a stylus, but I'm not sure.
I have used the hover property a handful of times, mostly to create custom cursors, which obviously do not have to show on touch devices.

This is one of the best ways to create scroll position based animations and I could write an article solely on this. I've learned a lot about it from reading this Mozilla article.
It's supported in all modern browsers and allows you to call functions when elements come in to view (or are intersecting) in your viewport.

It can be used to create lazy loading images or play videos only when they're in view. Or add styles and animations to elements at certain scroll positions.
I was also pleasantly surprised it still worked while using the Locomotive scroll library!

Apparently, when you set the css perspective property and create a horizontally scrollable container it creates a sort of out of the box scroll animation? Weird stuff!

Found this unexpected feature while working on a way to create a sort of scrollable timeline:

Bonus: learn from my mistakes

I've spent waaaay too many hours trying to fix a 'bug' where a container wouldn't scroll on mobile iOS but would on desktop. It appears using pointer-events: none on a parent element can really screw up the ability to scroll inside a scrollable container on iOS.

Want to work with me?

Check out my portfolio

Cyd
Freelance Web developer
CSS Transitions
#css #animation #beginners #tutorial
How to create a 3 dimensional object with CSS only
#showdev #tutorial #css #codepen
3 reasons why we created our own SCSS framework, and you should too
#productivity #beginners #webdev #discuss

Once suspended, cydstumpel will not be able to comment or publish posts until their suspension is removed.

Once unsuspended, cydstumpel will be able to comment and publish posts again.

Once unpublished, all posts by cydstumpel will become hidden and only accessible to themselves.

If cydstumpel is not suspended, they can still re-publish their posts from their dashboard.

Once unpublished, this post will become invisible to the public and only accessible to Cyd.

Thanks for keeping DEV Community safe. Here is what you can do to flag cydstumpel:

Unflagging cydstumpel will restore default visibility to their posts.