The module system of Rust is very powerful and strict. It’s powered by cargo, the de facto build tool for Rust projects. Following the idiom “convention over configuration” there is only a few configuration to be done.

Before we dive in, let’s make sure we have the same understanding for modules, packages and crates:

Before we can create a package, we need to decide whether we’re going to have a binary executable build (bin) or a library build (lib).

If we don’t know yet, just start with a bin package, because it’s almost no work to change it and if we just wanna hack around without writing tests, we can’t have a main entry-point in our lib package, so it’s also easier to start with the default bin. Well, it’s possible to have a package being both, but we will not handle that case here. Let’s rather have a look what those types do.

Now let’s have a look at the module system itself.

We’ve talked about bin and lib packages and that they do different things. Fortunately they are both based on the same Rust module system and to understand what the Rust compiler is doing, we can treat them equal.

While other languages try to push developers to have one language component per file, it’s bad practice to do so in Rust, because Rust has the term of modules. That also leads to larger source files, so your IDE better should support Rust “Outlines” (e.g. Visual Studio Code + rust-analyzer is great), to jump to your components quickly.

Every Rust file (.rs) is a module, so the intention is not to map every component like a struct to your filesystem, but to give it a home and make it part of a module. That being said it would be possible to have everything in a new file, but modules have to be interconnected and in a few minutes you’ll see why this is not a good idea.

Let’s make some examples as an abstract definition is more confusing. Here we have a package created by cargo init. We say that it has a module main and per convention it should also contain the fn main() entry-point, so a bin target package should at least have a main module. 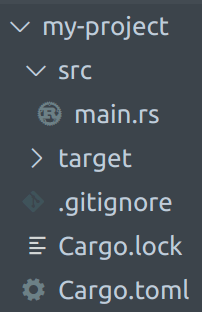 That was simple, right? Now let’s talk about a more interesting case. Let’s say we’re developing a web server with a database connection. At first we put everything in main.rs and then talk about how to split it.

To be honest this is way too less code to really think of splitting it, but let’s assume it’s more and of course our package is getting larger over time. For the sake of simplicity this example does nothing, but it should help to understand how we can use modules in Rust. So we have 5 sections here:

The fn main() stays in main.rs, but we can think of the other sections to be modules, because they are responsible for a specific thing and they should hide details. Let’s assume that we want to split main.rs and add 3 other modules. We have two options for our sub-modules:

You’ll probably see them less often, but they are easier to understand for now. In order to understand what needs to be changed to put our code in modules, please read the comments in the code.

Let’s summarize what happened to the code to work with modules:

We’ll also shortly stick to the visibility rules of Rust, but let’s first have a look at the file-based modules. We already have one (main.rs), but let’s put all mod {...} sections into different files.

What we have now are 4 files: main.rs, config.rs, db.rs and server.rs. At first we put the content of the mod blocks into a new file. We don’t have to change visibility or use statements, simply copy and paste. Per convention module names are lower snake case and so do the files.

The interesting part is the main.rs where we remove the mod blocks and replaced them by simple mod statements (without block). For the compiler mod server; means “please add server module via server.rs and make it visible“. So use server; doesn’t make sense at all, as we already added it. To make our Server visible to be used in the code we say use server::Server;. Really mod is just for our submodules. All of our dependencies are already visible to all modules.

The module structure of our example is quite flat. But what about nested embedded modules or directories with modules? Wait a second, we should clarify one thing first: filesystem and module tree do not match?

Let’s say our server.rs module is growing and we actually want to have more modules. Large files can become a problem for reading, but again, in Rust hundreds or thousand lines of code in a file is actually fine and there is another reason I’ll try to explain in the next sections.

From what we know, what options do we have?

The first option works, but what about rather spending a new file? Of course it’s possible, let’s check out the next example.

That’s it, so the file structure should look like this now. 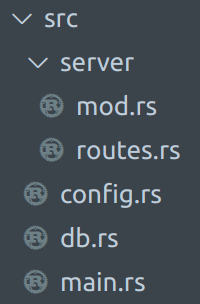 To correct a previous statement: mod server; means “please add server module via server.rs or server/mod.rs and make it visible“. That’s how we can nest modules and we’re almost done understanding how modules work in Rust, but what about accessing nested modules from outside? Can I really hide intrinsic code when I want nobody to use it from outside? Let’s have a look at the visibility rules in order to figure out how we can access or really hide something.

Think of: In Rust everything “is there”, but you may not see it from your current view. You can’t use what you cannot see. What we see without use:

But that’s not all. There is more, because they all can expose things to the outside. You can’t see them directly, but you can access them either via it’s relative or absolute path or make them visible via use keyword. The path separator is a double colon (::), e.g. routes::handle_request();.

For submodules, to “expose something” means, that the module has to make it pub. The other direction, a submodule has full access to its parents, but only to them. If you as a module wants to access a sibling module, you have the same access constraints like your parent, because you have to access it via super or crate path.

Now we should talk about how to access submodules of a submodule. So from outside a module, we can only see what is pub inside the module without exception. Let’s say we need pub const PREFIX: &str = “/app”; from server/routes.rs in our main.rs module. In order to expose something from another submodule, we have two options to consider for server/mod.rs as server/routes.rs is a submodule of it:

In that case it would be better to only expose PREFIX, but there are cases, when your module has so many things in it, that you want put it in submodules and also represent them to the outside world like this. The bigger the packages are, the more likely they do not only expose one module with everything in it, but a bunch of submodules.

When to split modules into submodules?

At least, there is nothing stopping you from throwing a module at every little component, but the main goal of modules is different: hide details, tie code together and design a clear minimal interface to the outside.

If you’re not sure whether to split or not, simply don’t split. It’s more likely that to make things more difficult at first than it helps. I mostly have a main.rs with hundreds of lines of code, before I create the first the submodule, but when I create it, I have a good overview over all components and how they work together.

Depending on what you do you should take that more or less seriously. For bin packages it shouldn’t be a big problem to fix visibility issues as you can see if it still compiles or not and also fix that. As a lib package maintainer you should better check what you’re going to share. Narrowing visibility breaks the public API so it’s going to be an mature version release for “a small patch”, because maybe someone is using it. You can also live with it as technical debt and fix it one day, when there are a few big changes, but better take care before.

When to use embedded or file modules?

To be honest there is no good rule of thumb known to me for this. I mostly see and use file modules. At least I know two cases where we often have embedded modules.

At first, it’s convention to embed a tests module at the bottom for unit tests.

The module is only compiled for cfg(test), it has full access to its parent (we could also test private state, not saying you should) and it belongs together, so we don’t even have to switch files for writing tests.

Second, some embedded modules are the result of code refactorings, like moving code into submodules need “re-exports” which is not worth a new file.

Putting together packages and modules

A bin package simply starts at main.rs as root module and it has to contain the fn main() entry-point. main.rs doesn’t need to expose anything.

A lib package starts at lib.rs as root module and dependants only see what lib.rs exposes.

So we have 3 special files of the Rust module system: src/main.rs, src/lib.rs and any mod.rs. Think of what the mod.rs file is to its module, main.rs is to a bin package and lib.rs is to a lib package, because the same rules apply. You can choose any other file name just as you like.

Well, and that’s what it’s all about, although we skipped some details like there are multiple different pub visibility modifiers like pub (crate) or pub (super). Just have a look at the visibility and privacy section of the Rust reference and you’ll understand them in the context of modules.

Creating a Text-based UI with rust

An HTTP request parser with rust and pest.rs

Once suspended, daaitch will not be able to comment or publish posts until their suspension is removed.

Once unsuspended, daaitch will be able to comment and publish posts again.

Once unpublished, all posts by daaitch will become hidden and only accessible to themselves.

If daaitch is not suspended, they can still re-publish their posts from their dashboard.

Once unpublished, this post will become invisible to the public and only accessible to Philipp Renoth.

Thanks for keeping DEV Community 👩‍💻👨‍💻 safe. Here is what you can do to flag daaitch:

Unflagging daaitch will restore default visibility to their posts.