There isn’t a way to monitor stickiness of a component in CSS (position: sticky).

This nice article on Google, An event for CSS position:sticky shows how to emulate sticky events in vanilla JavaScript without using scroll event but using IntersectionObserver.

I will show how to create React components to emulate the same behavior.

This article is based on An event for CSS position:sticky, which also provides a nice demo and explanation on how it was implemented as well as the source code.

The basic idea is that, you add top & bottom sentinels around the sticky boundary, and observe those sentinels using IntersectionObserver.

Left is the terms used in the linked article above and the right is corresponding component name used here. 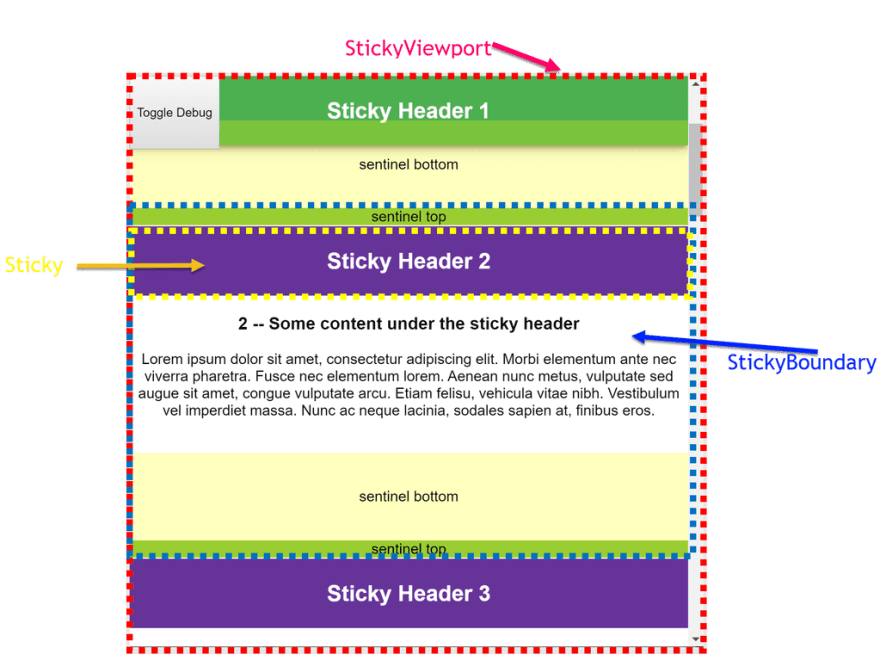 What we are building

Before moving on, let’s see what we are building.

Sticky headers styles are changed as they stick and unstick without listening to scroll event, which can cause site performance issue if not handled correctly.

Here is the working Sandbox.

You can click on Toggle Debug button to show sentinels.

You can see that the sticky headers change the color and the box shadow styles.

Here is the how one might use the component to observe un/stuck events.

Now let’s see how each component is implemented.

I will start from top components toward the bottom because I’ve actually written the rendered component (how the components should be used) before writing down implementations for them.

I wasn’t even sure if it’d work but that’s how I wanted the components to work.

Let’s take a look at how it’s implemented.

Now let’s see what state and actions StickyProvider provides in the tree.

The context is implemented using the pattern by Kent C. Dodd’s article, How to use React Context effectively.

Basically, you create two contexts, one for the state, another for dispatch and create hooks for each.

The difference in StickyProvider is that, instead of exposing raw dispatch from useReducer directly, I’ve encapsulated it into actions.

It was necessary because we are observing TOP & BOTTOM sentinels and during the declaration, we don’t know which sticky element we are monitoring.

Now we have enough context with state & actions, let’s move on and see implementations of child components, StickyBoundary, and Sticky.

The outline of StickyBoundary looks as below.

So basically StickyBoundary wraps children with TOP & BOTTOM sentinels, with which we can tell whether a sticky component is stuck or unstuck.

OK, this is now where it gets messy a bit. I’ve followed the logic in the Google doc so will be brief and explain only relevant React codes.

The structure is about the same as useObserveTopSentinels so will be skipping over the details.

The only difference is the logic to calculate when to fire the un/stuck event depending on the position of BOTTOM sentinel, which was discussed in the Google doc.

Now time for the last component, Sticky, which will “stick” the child component and how it works in conjunction with aforementioned components.

Let’s take a look at the working demo one more time.

How to Build a Dynamic Table Component in React

Breaking a background out of its container

Thanks for keeping DEV Community 👩‍💻👨‍💻 safe. Here is what you can do to flag dance2die: