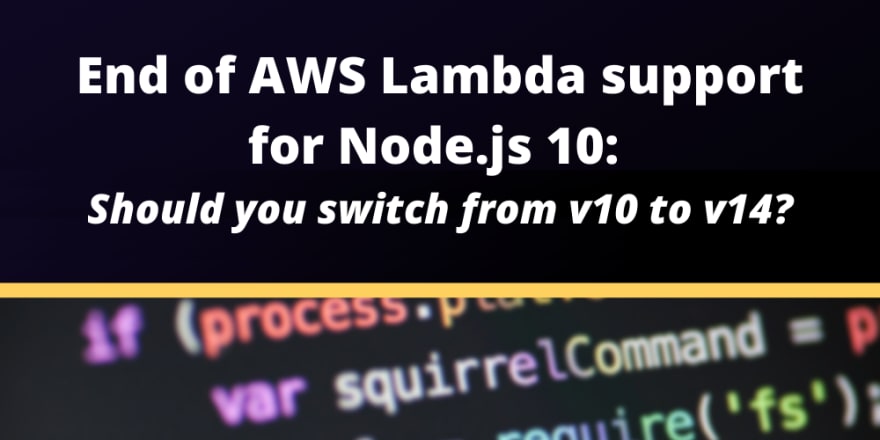 AWS Lambda also only supports the long-term support (LTS) versions of Node.js: the even version numbers. Currently, versions 10, 12, and 14 are all supported, but in August 2021, the support for version 10 is running out.

So it's time to switch, but besides evading the support end, what benefits does it bring to switch directly to version 14? In this article, I will go over the changes that have happened since version 10 of Node.js.

What Features were Added Since Version 10?

Let's start with the ECMAScript additions to JavaScript. Usually, they are supported in the JavaScript engine before they are standardized. The idea is that nothing, that isn't working in practice, gets standardized.

This is one of the biggest additions, in my opinion. Gone are the crashes because you tried to access an attribute of an undefined variable, or you set a default for a value that was null-ish.

If at least one part of this chain isn't an object, deepValue will be set to undefined.

The nullish coalescing operator ?? is an alternative to the logical or operator || used to set variables to a default value.

The Symbol class got two new additions. If you create a new symbol with a description, you can now check it later with the description property.

There is also a new well-known symbol called matchAll. It can be used to create custom matchAll functions for your data types.

The object numbers needs a generator function (that's what the * means) in its Symbol.matchAll property, so it can be used as a parameter for the String.prototype.matchAll method. This example will output ["2021", "05", "12"].

The unification of window, self, frames, and global into one global object called globalThis. Back in the days, the access to the global object differed from where your script was running, but if you tried to access window inside Node.js or a worker thread, it would fail. With globalThis your script doesn't have to care anymore.

This example works in all current browser versions and Node.js:

Let's see how it works in practice:

If you end up with a nested array, and you want to lift the nested elements back to the top array, the new flat method for arrays is the solution.

Since the flat method is usually called to clear up the array structure before a call to the map method, a shortcut method called flatMap() will work as a map with a flat applied before.

In the following example, the item is always a number and never an array because the nested array is flattened before passed to the callback function.

This would display "德文", the traditional Chinese translation of the language "German".

It's now possible to add underlines to number literals to make them more readable inside the code.

Since version 10, many performance improvements have happened. The startup time improved by 30%, which can shave quite some time from your cold start latency.

The heap size configuration was done with two default values before, but in version 14, Node.js will take the actual available memory into account when configuring the optimal heap size. Since AWS Lambda allows for very flexible memory configurations per function, this could help you get more bang for the buck.

Find out more about saving money on Lambdas in our 6 AWS Lambda Cost Optimization Strategies That Work article.

The following graphs illustrate the differences. 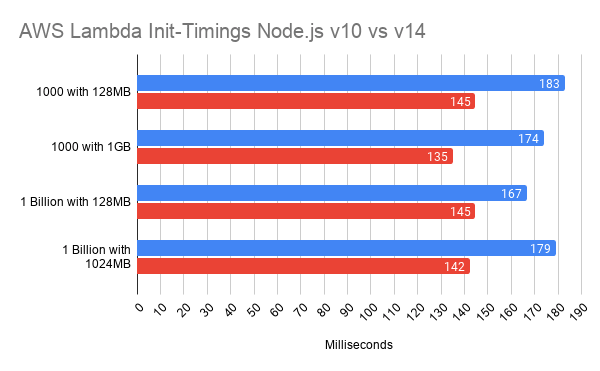 Blue marks Node.js 10 and red 14. As you can see, the init timings got better by ~20% and I just switched the runtime version. Because Lambda functions are billed by millisecond this is real money you can save. Also, short-running Lambda functions can reduce the latency quite a bit. 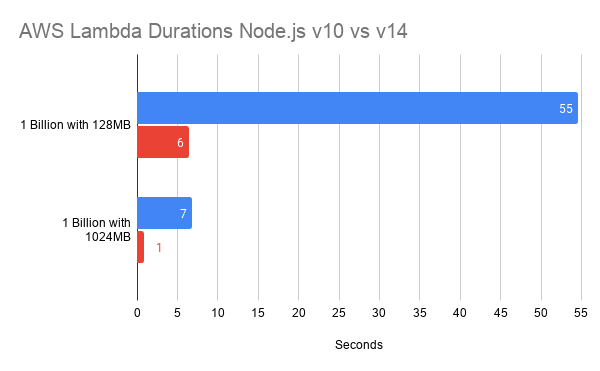 Again, blue marks Node.js 10 and red 14. This time I measured the duration an invocation took. The difference between the primes between hundred and thousand wasn't much, so I left them out here, but for longer computations, like finding the primes between one hundred and one billion, it makes a huge difference. This saves a huge chunk of money and could even make it possible to do slow calculations synchronously as an API Gateway response now.

The diagnostic reports help with analyzing the behavior of a Node.js program. It will log out a JSON formatted string into a file that you can check for more details than CloudWatch gives you.

Find out how you can get even more detailed and faster AWS data analytics, observability and debugging.

TLS 1.3 and QUIC protocol support have landed in the LTS version of Node.js, so your Lambda can keep communicating with the latest services out there.

The worker threads API is now stable. You can use it for computation-intensive workloads. Usually, Node.js is a single-threaded environment, but you can now execute JavaScript with worker threads in parallel. When you configure Lambda memory, the vCPU cores are also configured implicitly. If you set a memory limit of 10 GB, you also get 6 vCPU cores, which you can now utilize with Node.js worker threads.

Full International Components for Unicode (ICU) support has landed in Node.js. ICU is a set of "libraries providing Unicode and Globalization support for software applications". The full list of features can be found on Node.js's GitHub Repository.

The sun is setting on the LTS for Node.js version 10 in a few months' time, and so is the AWS Lambda runtime support. If you have to switch anyway, why not go straight to version 14? It will give you a longer support time in the future, and you get a whole bag of extra features that improve the coding of Lambda functions and their performance on the AWS platform.

How to deploy a Node.js application to AWS Lambda using Serverless