After scanning thousands of repositories and interviewing hundreds of GitHub, I created a list of common best practices which are strongly recommended to be adopted in every modern software development organization which is using GitHub to store their code:

Anything in the master branch should always be deployable, that’s why you should never commit to the default branches directly and why Gitflow workflow has become the standard. Using branch protection can help you prevent direct commits and of course, everything should be managed via pull requests.

Maybe you are working on a new environment, or you didn’t notice that your Git configuration is incorrect which causes the user to commit code with the wrong email address. Now, their commit is not associated with the right user and makes it nearly impossible to trace back who wrote what.

Make sure that your Git client is configured with the correct email address and linked to your GitHub user. Check your pull requests during code review for unrecognized commits.

7. 🎩 Define CODEOWNERS for each repository

When building a Cloud Native app, there are many secrets — account passwords, API keys, private tokens, and SSH keys — that we safeguard. NEVER! commit any secrets into your code. Instead, use environment variables that are injected externally from a secure store.

You can use tools like Vault and AWS Secrets Manager to help with your secret management in production.

There are lots of great tools to identify existing secrets in your code and prevent new ones. For example, Git-secrets can help you to identify passwords in your code. With Git Hooks you can build a pre-commit hook and check every pull request for secrets.

5. ⛔ Avoid committing dependencies into your project

Pushing dependencies into your remote origin will increase repository size. Remove any projects dependencies included in your repositories and let your package manager download them in each build. if you are afraid of “dependencies availability” you should consider using a binary repository manager solution like Jfrog or Nexus Repository. Also, check out Git-Sizer by GitHub.

We strongly recommend against committing your local config files to version control. Usually, those are private configuration files which you don’t want to push to remote because they are holding secrets, personal preferences, history or general information which should stay only in your local environment.

📤 3. Create a meaningful .gitignore file for your projects

A .gitignore file is a must in each repository to ignore predefined files and directories. It will help you to prevent secret keys, dependencies and many other possible discrepancies in your code. You can choose a relevant template from Gitignore.io.

Over time, for various reasons, we find ourself with unmaintained repositories. Maybe you opened a new repository for an ad hoc use case (or you wanted to POC a new tech) or you have some repositories with old and irrelevant code. The problem is the same – those repositories are not actively developed anymore after they served their purpose, so you don’t want to maintain them or other people will rely on/use them. The best practice will always be to archive those repositories which will make them “read-only” to everyone.

Your manifest file holds the information about all of your packages versions to maintain consistent results without breaking your code every time you install your app dependencies. The best practice is to use a manifest lock file to avoid any discrepancies and confirm that you are getting the same packages version each time. The opposite being that you leave your code component version imprecise, are uncertain which version will be installed on the next build and your code may break.

Although you are using the same package, a different version distribution will make it harder to reuse code and tests in various projects.

If you have a package which is used in multiple projects, try at a minimum to use the same major version across the different repositories. 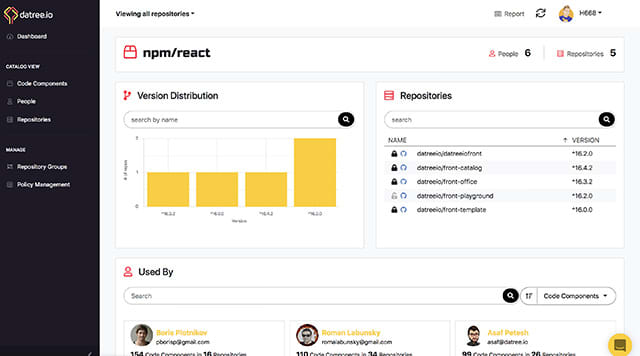 All that’s left for you to do is check off each of the aforementioned best practices, on each of your repositories, one by one.

Hosting your self hosted runners on GitHub Codespaces

How to Add a Newsletter to Your Markdown Blog

Getting started in 2 steps 👇

Once suspended, datreeio will not be able to comment or publish posts until their suspension is removed.

Once unsuspended, datreeio will be able to comment and publish posts again.

Once unpublished, all posts by datreeio will become hidden and only accessible to themselves.

If datreeio is not suspended, they can still re-publish their posts from their dashboard.

Once unpublished, this post will become invisible to the public and only accessible to Eyar Zilberman.

Thanks for keeping DEV Community 👩‍💻👨‍💻 safe. Here is what you can do to flag datreeio:

Unflagging datreeio will restore default visibility to their posts.