Recently at work I had to move our dev, staging and production web servers from Apache2 to Nginx. The reason for this move is that in the rest of the company we are using Nginx for all the backend services but when the web sites were set up for some reason the consultants set up Apache2. This became a problem mostly for management. In this article, I will be going step-by-step through the process. I will be using a vagrant box for all the screenshots but the steps I did were the same for the actual servers.

For my test server I am using vagrant and ubuntu/bionic64. On this server I had apache2.4, php7.2 and mysql5.7 a basic LAMP stack. Which I will be moving to a LEMP stack replacing Apache with Nginx.

Pretty straight forward. Start off by checking for updates.

Nginx is now installed but is not running, since we have Apache2 already installed and configured on the system, Apache2 will be using port 80 which means that to avoid conflicts we should run Nginx on a different port to test that everything is running well. I choose the port 8080.

There is a default website that is set up with Nginx (just like Apache) just to make sure that things work. The config can be seen at.

This should open up a file that looks like.

Let's test the config quickly before we start the Nginx service.

If all is well, let's write a small HTML page that will just let us know that the server is up. Line 41 shows me the root of the server. I changed server root to make sure that am not using the same directory as Apache.

That's the directory I will be adding the index.html file. Now we can start the server.

To test out the new config.

Which should return the new HTML file that I had created. Moving on to install PHP.

Right now we have PHP7.2 installed on the system, since there has been a bit of a scare with the whole PHP7.2 and Nginx config, will be moving to PHP7.3.

First off, Ubuntu doesn't know where to get PHP7.3 from so we need to add the repository.

Actually installing PHP7.3 and some extensions. These are just the extensions I need, feel free to add or remove extensions as required.

Once all the extensions have been installed, its time to edit the Nginx config file again to tell it that the website we have uses PHP. The config file is below, with all the comments stripped out and comments only on the lines that have been changed.

Test the config to make sure there are no syntax errors.

You will probably get an error because there is no env file at /srv/config/default.nginx.conf. Just add a blank file there, for now, will explain what it does later.

Hopefully, that solved your error. Now let's change the index.html file to index.php and add some basic PHP code to see if things work. Also, be sure to set the appropriate permissions to the index.php file. I like going with.

And you should see the PHP file you wrote. I printed out the phpinfo() function to make sure configurations are good.

I like having some of my app configurations saved in the $_SERVER superglobal. This comes in handy when your moving your app between dev, stage and prod servers and don't want to keep on changing your db passwords or API endpoints.

The file that we touched /srv/config/default.nginx.conf, I will be adding the following lines of code in it.

The format is usually

Feel free to add any other env variables. Once your happy test config and restart Nginx. You should see your new variables in the phpinfo() function output as below. 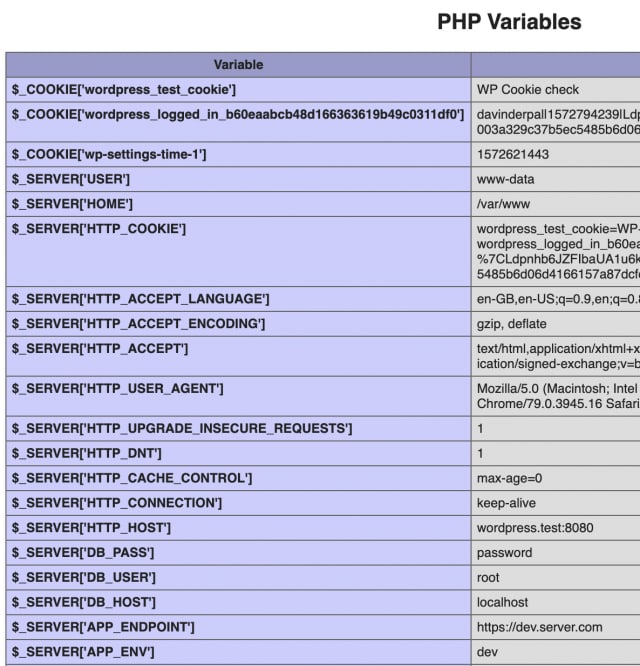 And thats it, just move all your files to the relevant folder to do a final test. When ready you can stop the Apache service.

Change the port number from 8080 in the Nginx config, to 80 and restart Nginx, and we are done.

Many To Many Relationship Laravel 9 Example

Davinderpal Singh Rehal
A full stack engineer looking to get more people interested in programming and specifically get more Sikh girls interested in how to program. Writing at http://davi.codes
What was your win this week?
#discuss #weeklyretro
Twitter charging for API usage starting Feb. 9th
#twitter #api #discuss
I challenged myself to read every day, and it changed my life 📚
#watercooler #reading #productivity #motivation

Once suspended, davinderpalrehal will not be able to comment or publish posts until their suspension is removed.

Once unsuspended, davinderpalrehal will be able to comment and publish posts again.

Once unpublished, all posts by davinderpalrehal will become hidden and only accessible to themselves.

If davinderpalrehal is not suspended, they can still re-publish their posts from their dashboard.

Once unpublished, this post will become invisible to the public and only accessible to Davinderpal Singh Rehal.

Thanks for keeping DEV Community 👩‍💻👨‍💻 safe. Here is what you can do to flag davinderpalrehal:

Unflagging davinderpalrehal will restore default visibility to their posts.